The company’s founding team includes some experienced entrepreneurs. CEO David Zhao was co-founder and CEO at Zecter, the startup behind cloud service ZumoDrive, which was acquired by Motorola Mobility in 2010. President Russ d’Sa, meanwhile, was an engineer at Twitter (where he said he invented the Twitter Card) and 23andMe, and he also co-founded startups MeetYou and DraftMix. Like Zecter, d’Sa’s startups were backed by Y Combinator, and that’s where d’Sa and Zhao met.

Zhao and d’Sa told me that they’ve developed a platform for virtualizing mobile apps, so the apps can run in the cloud, without requiring any installation from the user, and with very little latency. 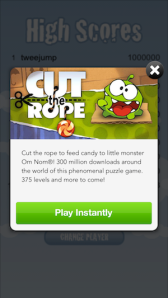 Why would someone want to do that to their app? Well, Voxel is starting out by tackling advertising. Zhao described the existing options for mobile ads as an “awkward and poor user experience.” After all, whether advertisers are using banner ads or interstitials, requiring users to download an app before they’ve even had a chance to try it isn’t really ideal.

Using Voxel’s platform, mobile developers and publishers can create a virtualized version of their app, which can then become a fully interactive ad. As d’Sa put it, “The product literally is the advertisement.”

d’Sa added that instead of building an ad network of its own, the Voxel team hopes to integrate with existing networks. He suggested that these interactive capabilities could be used in a wide range of potential ad formats.

During his on-stage demo, d’Sa also suggested that Voxel could change the way mobile software is distributed — the App Store, he said, “feels like 20 years ago,” with its static images and all the clicking that’s required.

d’Sa said the platform works by creating a video stream of the app, then recording the user’s actions and replaying them in the cloud. And it’s doing it all super-quickly, as I saw when Zhao and d’Sa gave me a demo of some sample games virtualized by Voxel. They initially braved the terrible cellular reception in the TechCrunch office, and the performance was good enough that d’Sa could play a fast-moving run-and-jump game with minimal latency. Then they switched to the office WiFi, and (had I not been told beforehand) I could have been convinced that the games were running natively on the phone.

There are other companies offering app virtualization tools, but Zhao suggested that they’re somewhat “specialized”. App.io is focused on creating versions of iOS apps that work in the browser, allowing companies to include app demos on their websites. And the initial version of the Agawi platform was built for advertising Android games (though Agawi executives have told me they have broader ambitions).

d’Sa said that Voxel, on the other hand, is “much more of a platform than the existing players,” because even though the company is starting out with ads, the technology is built to expand into other areas. For example, Zhao said it might be used to create virtualized versions of enterprise apps, so that sensitive data isn’t stored on personal devices. Or developers could create demos to test out app ideas before they build the full product.

The platform is limited to iOS apps for now, but Zhao said the company will support Android too. Initial partners include PocketGems and HotelTonight. 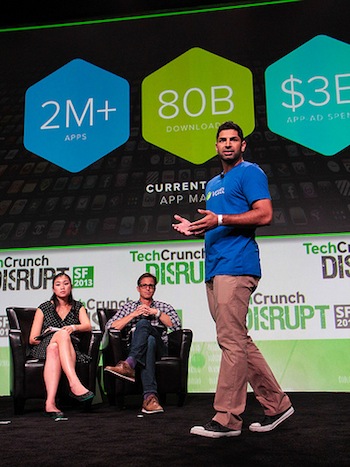 It’s hard to believe that the games work as well as Voxel claims. Native is always going to run faster than apps over the network, but latency is “a key thing” — the game demo was a live demo, and Voxel works with all core game types.

How do you get latency down so low? Do you need to have servers close to the user? Server location is a factor, but Voxel has also optimized every point in the pipeline.

Do you think the app distribution model will change in the future? What about the mobile web? Mobile web is “a big part of it,” but at the same time companies like Facebook have stepped back from HTML5.

Why advertising? Why not build your own app distribution system? If you want to “play in mobile” you need to abide by the rules set by the two major platforms, Apple and Google, and they don’t let you distribute app stores in their app stores.