Born at Berkeley as Politify, a fun app to compare the personal impacts of tax plans of then rival candidates for president, Barack Obama and Mitt Romney, Outline is building a tool to demystify the process of governance.

If you have played a real-time strategy game that involves resource management, you understand Outline: Voters can adjust tax rates and the like, and see the impact those changes would have their own budgets, and their state a whole. That it goes both ways matters, as everyone wants more but doesn’t want to pay for it.

Outline’s first customer will be the State of Massachusetts, though that deal remains in contractual discussion. The company informed TechCrunch it will likely become cashflow positive following that first agreement. Currently composed of a team of five, Outline is looking to hire three to five more, mostly designers and economists. 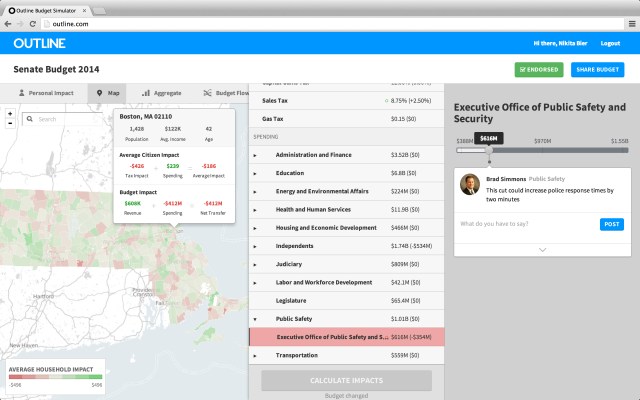 Outline applies its model to a states’ makeup using datasets from various sources to track tax policy, household income, and other variables. It then allows users to tweak the big dials – statewide tax policy, education spending – and see if their state lands in the red, or the black.

It’s an effective tool for showing voters what is, and is not possible. Every voter wants more money for the government programs that they enjoy and personally benefit from, and lower taxes. A state using Outline can cut through that and give everyday citizens a tool that they can understand and use.

According to the firm, tools such as theirs do exist inside state governments, but they are complex bits of code, often featuring non-graphical output. Outline flips that by making the process simple, and digestible; if those tools are DOS, Outline wants to be Windows 95.

Today at TechCrunch Disrupt SF, Outline announced that it has raised a $850,000 seed round, with the largest chunk of that sum provided by the Knight Foundation. Presuming that the company’s deal with the State of Massachusetts goes as planned, Outline intends to add one state per quarter to kick things off, and double that rate in the following year.

Working with the government means long procurement cycles – half a year is within normal bounds – and the company could run into friction. That said, states already expend large sums on similar tools, so its stated sales goals are within reasonable bounds of expectation. The company claims that 10 states are currently “interested” in its service. Akin to Instacart’s slow geographical growth, Outline remains more focused on nailing its first market at the moment than landing five more.

Outline will charge on a yearly subscription payment model. 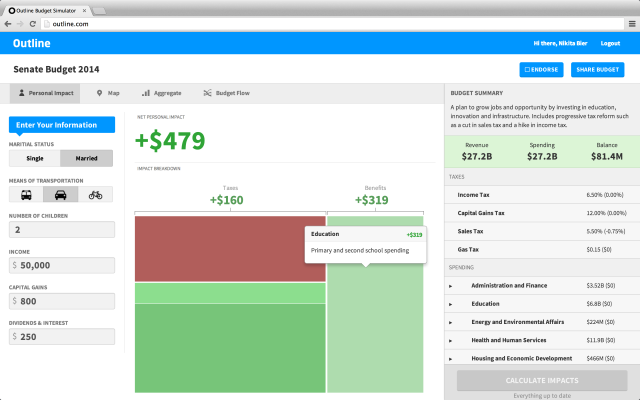 Is there appetite from the public for the sort of tooling that Outline provides? When the company was in its nascent form as Politify – before it joined TechStars Boston, and around the time that Massachusetts provided the group with $25,000 to get started – 4 million people used its tool to see under which president they would fare better when it came to taxes.

Sure, that’s election year demand, but in my view it does show that folks of different stripes can and do find simple, actionable tools interesting.

And in the end, that’s what Outline wants to provide: A desire and action conduit between citizens and their government. Once a citizen has crafted a budget for their state, they can submit it to that government. On the state side, the results are collected, and can be then analyzed to gauge citizen sentiment directly.

The future of government? Perhaps a small, but quite interesting piece of it.

Q: Will people think that the model is rigged if it doesn’t match their views?

Q: Does this only matter during an election year?

A: Government takes up a third of our income. They will therefore be plugged in if they are given a notification that your income is about to go down.

Q: What is the line item that governments are buying today that you are the substitute for?

A: Most governments buy SaaS ERP systems, and we cover about 40% of that. [Q: Do you want to build an entire government ERP system?] We actually displace about 40% of the features of those tools, and could expand into those other tools. But we haven’t been working on building those features.

Q: What if I am a government and I don’t want to be transparent?

A: Of course we go after early adopters first. Bureaucrats love the tool as it constrains what is possible [voters can’t pick things that are impossible].

Q: How long to build out, say California wants you for next year?

A: About two months, as we have to parse certain policies that are local.