The 2600hz team took the stage at TechCrunch Disrupt today, launching its service for disrupting the mobile telecommunications industry by opening its infrastructure through a set of open APIs that developers can use to build out their own services.

The company is expanding to the cellular telecommunications market with technology that bypasses old-fashioned switching gear, a major encumbrance for mobile providers. With its software-based switch, 2600hz abstracts the complexity that comes with physical switches built primarily for the age of the dial tone than the new world of Internet communications.

Consequently it can cost resellers and carriers  that start at $250,000 to integrate their technologies with the telecommunications providers and take months to complete, requiring time-consuming integrations. And because the gear is not meant for software, the limitations are such that any provider has to prove it can sell hundreds of thousands of devices to justify the cost of integration. Furthermore, the architecture limits the types of features that can be offered on the device.

“It can be a talking laundry machine that can call you when the laundry is done,” said CEO Darren Schreiber in the presentation at Disrupt. 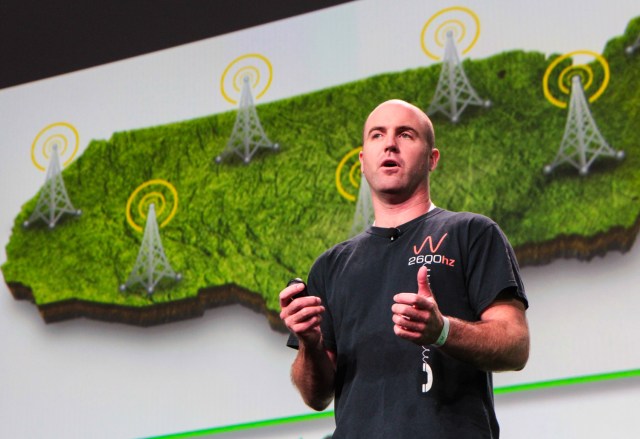 The 2600hz has done the hard work of creating peering relationships with telcos around the world. The technology virtualizes old-fashioned switches, creating a data layer for services that a telco can’t provide. With the software, there are no limitations on what a reseller or carrier can offer. Business services such as personal extensions or voice to text are easily added and done in a way that is faster than doing it on top of the network. For example, one customer is doing a conference bridge that has 20,000 simultaneous participants with real-time text-to-speech. The company’s customers represent three of the top ten Internet companies.  Ooma, a business and residential phone systems provider, is another customer the company may publicly speak about.

A customer using the 2600hz Kazoo platform gets access to a set of open APIs that can be used to offer voice, video or SMS services. 2600hz primarily serves the reseller market, those companies that can offer SMS services, for instance, on a telco’s network.

The 2600hz team says the service it provides best serves the middle market. Its competitors on high-end are companies like BroadSoft, which offer costly, proprietary IP hardware and combined hardware/software technologies. Asterisk, an open-source software, is at the other end of the spectrum. It is designed for smaller installations. Twilio and other related services run on top of a telco’s network for developers to build out apps.

Schreiber said in an interview last week that most competitors do not own their own switch. “We can do it at a higher level than others,” he said.

The technology 2600hz utilizes makes it unique, but market dominance is another question. The company has had to make its own peering connections with telco infrastructures around the world. The company has literally had to dig holes in the ground to make the connections. That gets costly when considering the global nature of its business. It will require considerable financing to ramp up while in the meantime competitors continue to grow that build apps going over the top of the network. Voice apps and mobile communications services may not have 2600hz quality, but sometimes good enough is all that matters.