Austin-based Insurance Zebra, as the name implies, isn’t exactly tackling the sexiest industry, but it’s definitely one that’s trying to help the everyday, mainstream consumer. The startup’s goal is to be the Kayak for auto insurance, so to speak, as it aggregates quotes to allow consumers to find their best options. But the company is doing something differently than others in this space – it’s letting consumers shop anonymously, while also seeing how their answers to the Insurance Zebra’s Q&A change their rate quotes in real-time.

Insurance Zebra founder and CEO Adam Lyons previously worked in the car insurance industry on both the underwriting and brokerage side of the business, which is how he came up with the idea for this service. He sees the potential for the car insurance industry to go online, the way the travel industry already has, as sites like Orbitz or Kayak helped move consumers away from using individual travel agents.

The company raised a $1.5 million seed round earlier this year, led by Austin’s Silverton Partners, with participation from Mark Cuban, Floodgate, and Birchmere Labs.

Today, Insurance Zebra is launching in California and Texas, the two states with the largest number of drivers. California, in particular, is one of the more difficult states to tackle given the complexities of its regulations. That’s another reason Insurance Zebra chose them for a launch pad, outside of the obvious — it’s a tech hotspot where a number of early adopters would be likely to give online insurance shopping a shot.

The site today offers up quotes from 33 different insurers, representing around 90 percent of the market. With two pieces of information — a car and a ZIP code — drivers will see quotes begin to flow in. As you proceed to answer more questions, the accuracy of the quotes will improve.

Using the site now, you’ll see several big-name companies like State Farm, Geico, Allstate and more represented, as well as a lot of specialized insurers like those for high-risk drivers, for example. According to COO Joshua Dziabiak, the company has relationships with some, but not all, of the companies whose quotes it provides, but it does have other big-name insurers on board who are still in the process of being integrated.

For those situations where Insurance Zebra doesn’t have a direct relationship with an insurer, he explains that they’re using public data to determine the rate quotes. “What we’re doing is leveraging public rate filings. Every carrier, by law, is required to submit these extremely long rate manuals to each state, which are made public through the state’s Dept. of Insurance website,” says Dziabiak. “What we’ve done is built a technology that reverse engineers those rate manuals and spits out rates quotes.” 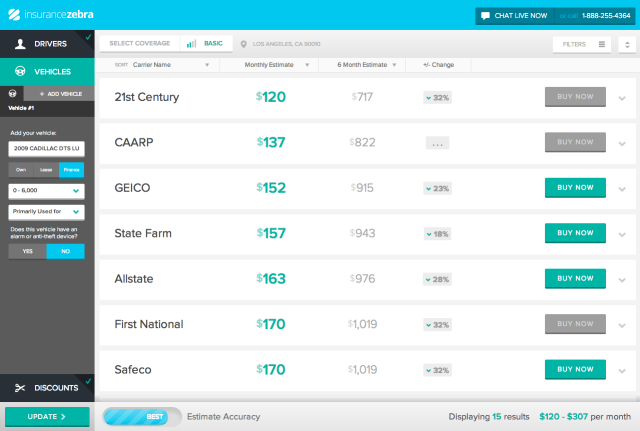 While there are a number of tools to compare insurance quotes today (including those from insurers themselves, like Progressive touts), Insurance Zebra’s advantage is not just in the real-time updating of quotes as you move through the Q&A sections, but also that it allows you to shop anonymously.

“There are lead aggregators out there where you put in your information and all of a sudden your phone starts blowing up from all sorts of agents,” explains Dziabiak. But Insurance Zebra lets you get the quotes without becoming a lead to be resold. Instead, the site itself is appointed with around 14 carriers right now, meaning it’s set up like a standard insurance agent. Like any mom-and-pop shops, it has the same licensees and commission structure. It doesn’t charge a consumer anything extra, but takes a commission on the sale when you buy.

Meanwhile, for those insurance companies where Insurance Zebra doesn’t have a direct relationship, the service lets the driver call the company via a Twilio-provided line. That way, the company can track the number of referrals and call durations at least, which could help it close deals further down the road.

Now that the service is open to the public, the plan is to expand nationwide soon. In the next six to eight weeks, Insurance Zebra will begin to open up to the rest of the U.S., though it will do so quietly as there will be other bugs to work out in each state, Dziabiak notes.

Interested users in California or Texas (or those who want to pretend) can try Insurance Zebra here.