Google+ users are wondering what has happened to the service’s Photo Editor, which has been down for days. Specifically, users had previously been able to access an “Edit” button on their photos shared on Google+’s site, in order to perform editing functions like cropping, adding effects, text, or decorations to photos, and more.

This button used to appear next to the “Share” option in Google+ Photos, which remains today. Also still available are the more advanced “Auto Enhance” and “Highlight” functions under the “More” menu at the top of the photo’s page. In addition, users can rotate, zoom and delete photos via the buttons on the menu. 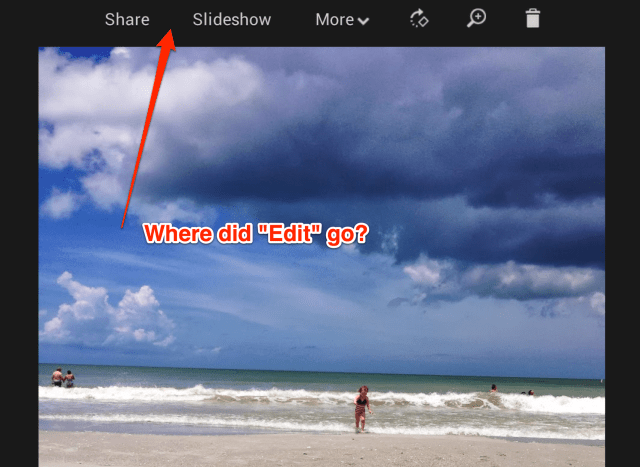 Chromebook and Chromebox owners (computers running Google’s Chrome OS) don’t have an “Edit” function on their special Google+ Photos app, which leaves limited options for accessing the features that are currently missing. Editing photos now only works on mobile apps, and via the older Picasa desktop software program.

According to various reports and tips from TechCrunch readers, the “Edit” button seemed to have disappeared during the Labor Day weekend here in the U.S., which could now frustrate users who are trying to tweak and share their holiday photos on the Google+ service. The outage does not appear to be limited to the U.S., or any specific region.

Google+’s “Help” account responded to a user’s concerned post about this problem yesterday evening, saying: “We aware of this issue and are currently investigating,” but declined to provide additional details as to what caused the problem, or when they may expect a resolution. A longer thread here, however, saw no official comment from Google.

The delay in fixing this problem is likely due to the holiday, as many U.S. employees, including Googlers, were off over the weekend and on Monday. That means the issue has probably only seen a day’s worth of work, amid other catch-up efforts. Still, one has to wonder which weekend warrior shipped code that broke this thing, instead of BBQ’ing like the rest of us did.

Google has responded with the following statement, but no other information or an ETA to a fix:

We’ve received reports about our desktop photo editing tools, in which the edit button may not be available. Our team is aware of the issue, and we’re working to bring back this capability as soon as possible. Rich photo editing remains available in the Google+ apps for both Android and iOS.

UPDATE, 9/6/13: Google+ Photo Editing functions appeared to come back online around or after 4:30 AM ET.