Samsung’s big Unpacked Episode 2 event is underway, and as expected, the company has used the venue to announce the Galaxy Note 3 smartphone. The Note is the original phablet, and the new version continues the tradition of big screen gadgets best-suited for big-handed people.

The new Galaxy Note 3 features a design with extremely slimmer bezels and sharper angles on its rounded edges, marking a slight departure from Galaxy device design language thus far. It’s thinner than its predecessor and lighter (168g), despite offering a larger screen at 5.7-inches. It also offers more battery life than the Galaxy Note 2, and there’s a new and improved S Pen, too. Plus it supports faster, and more “seamless LTE” with multi-band support.

The camera has 4K video recording capabilities with a new CRI LED flash that should improve low-light photography. Samsung claims nearly four more hours of battery life when playing back video, and performance in general during normal use should also extend battery by up to 40 percent over the previous generation.

Samsung was emphasizing craftsmanship with the Galaxy Note, which features a stitched leather rear cover (available in black, white and pink). It also has a metallic rim running around the edge, and there’s a flip wallet accessory available in 10 different colors that also features a larger S View window cover for checking messages, making calls and accessing more info at a glance without having to activate the whole display. 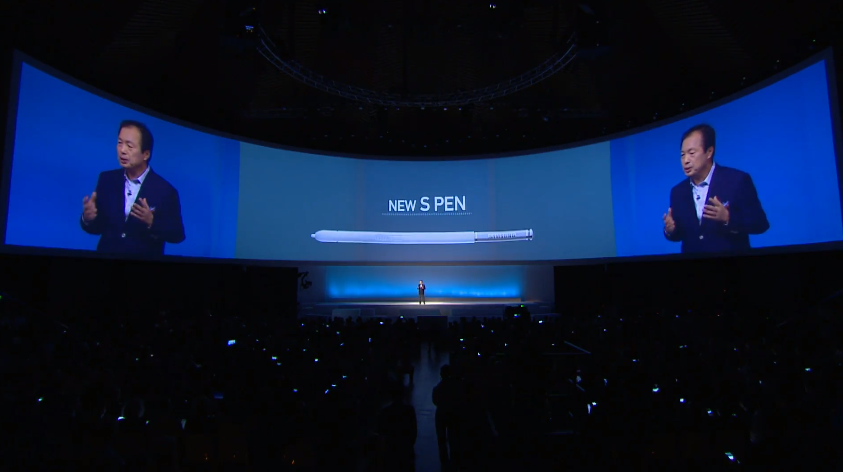 The new S Pen is designed to work with the larger screen. Samsung called it the “key” to unlocking Note features and power. This works via a number of new interface controls. There’s a dot on-screen that appears when you can activate “Air Command,” which is a tool wheel that provides quick access to memo, scrapbooking, screenwriting, and a finder search function. There’s also something Samsung calls “circle,” which uses a circle drawing gesture to capture content you want to save to your scrapbook, as called up via Air Command. Box is a way to multitask, that lets you do two things at once via essentially a picture-in-picture interface. 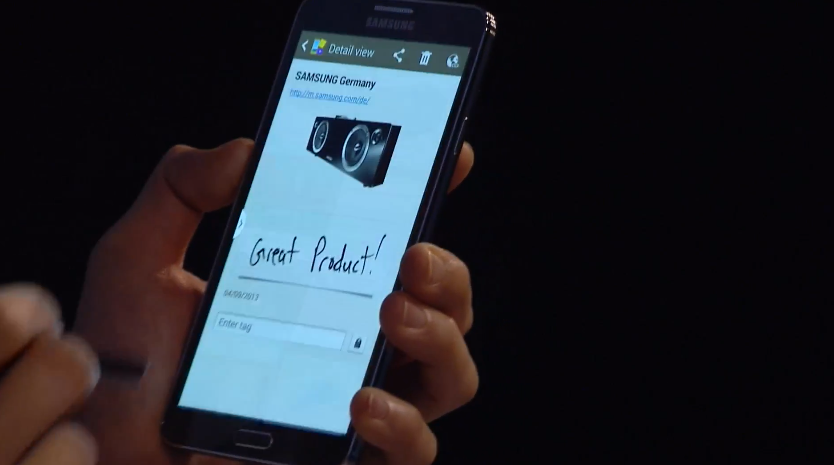 Samsung’s Knox mobile security feature, which is designed to help increase enterprise and consumer security via partitioned software for consumer and business use for BYOD device users. The Note 3 will ship September 25 in 149 countries around the world.

Samsung’s smartphone fortunes are the subject of major scrutiny at the moment, since the company is perceived as possibly having hit a ceiling in terms of growing its overall share of the market. The company is hosting a meeting with investors and analysts to discuss its long-term plans in the face of these fears, and the Note line drives quite a few sales, though not as many as the flagship Galaxy S4. Estimates for break-out sales of the Note 2 on its own are hard to place, but Samsung has in the past said it anticipated the device would pass 20 million units shipped.

No information on Galaxy Note 3 availability just yet beyond the September 25 date, and the official Samsung press materials around the launch says only that it’ll make it out to all major U.S. carriers “later this year.”