Apple has been ‘pulling the string’ on the Apple TV for seven years now. Think about that one for a minute: it’s had a set-top box since before the iPhone.

During that time, the landscape of online video entertainment has completely changed, largely as a result of the iPhone, iPad and iTunes Store. While Apple has a long way to go in order to make the Apple TV a decent solution for countries outside of the US, it has made some progress and continues to very slowly iterate on the original premise of an in-home media streaming device.

A large part of that is iCloud, which now allows users to watch any purchases they’ve made from iTunes on any device, including ATV. But there’s still a lot of work to be done if the device is going to become a major pillar of Apple’s business, as I believe that it could be — and should be if cards are played right.

The Apple TV, whether it comes in its current hockey-puck form or married to a flat-panel display, has the potential to create an ouroboros of ecosystem lock-in that could pin closed many doors for other laggards like Google and the much more competitive Amazon.

If the iPad benefited from the iPhone and its app ecosystem and the Mac benefited from the iPad’s millions of newly exposed users, so could an Apple TV that offered hundreds or thousands of ‘apps’ that were familiar to users. Those users would happily buy into a system that offered them easy and convenient access to their in-network content as well as their ‘out of network’ content. This cyclical thinking has worked well as Apple expanded from phones to tablets, and should continue to work on the strength of those efforts.

In order to do so, Apple will need to make some aggressive moves to mature the device. In fact, it needs to move away from being a device at all and finally make the jump to being a platform. I’m not sure anyone disagrees with that, as everywhere you turn people are talking about the potential of apps on Apple TV. Unless you’re blind, you can see the possibilities inherent in turning Apple’s following of hundreds of thousands of developers loose on a screen that’s hosted in your living room. Unlike some very smart folks, however, I’m not so sure that a full Apple TV SDK is on its way ‘soon’, for a variety of reasons.

First, I’m hearing that the current tools offered to Apple TV partners are fairly crude, far from a true software SDK of the likes that developers for Apple’s App Store and Mac App Store have access to. When companies like HBO say that they built apps in-house, what’s meant is that Apple does have some tools and frameworks to offer, but they’re far from the options that are out there for app developers.

Even taking a superficial look at the apps, you can see that these are not truly custom solutions, but modified versions of stock Apple TV menu system. 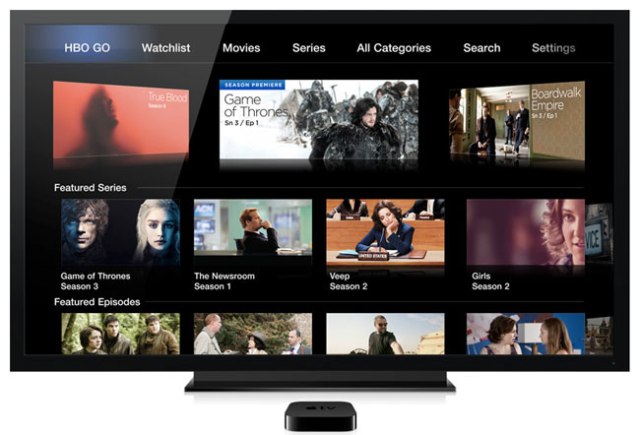 Now compare it to the Vevo app: 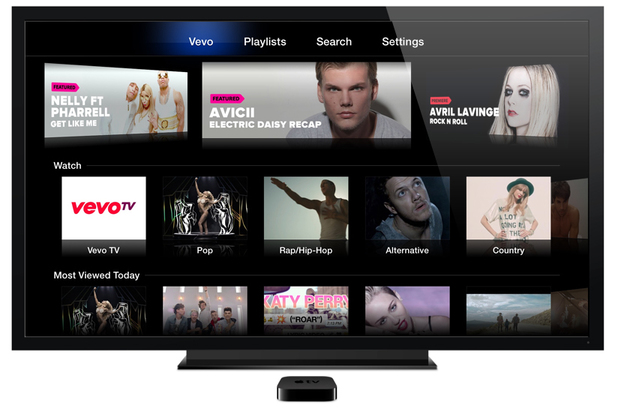 There’s a bunch of stuff that can doubtlessly be played with and tweaked by the partners — within Apple’s style guide for current ATV ‘apps’ — but we’re not looking at the freedom that developers on the App Store get.

I haven’t been able to uncover anything about Apple’s timeline when it comes to opening up a set of tools for developers to create apps for ATV, but whatever they are, it’s unlikely that they’re the current tools that partners are using to make apps. Apple has a reputation for creating extensive, mature and easy-to-use developer utilities and documentation. The existing tools are, apparently, not…that.

Before an App Store

Beyond the fact that we’ve seen little evidence of a real SDK out there for Apple TV, there are a host of other issues that will have to be overcome on the hardware side before the device is ready to support an app ecosystem.

Matt Braun is the developer of SketchPartyTV, a very cool group-play app that heavily utilizes AirPlay and the Apple TV. Braun, as a game developer, notes that there are some distinct disadvantages of the Apple TV platform that make it a tough sell.

First of all, the current hardware only has 8 GB of flash memory, which is already used to hold current preferences, buffer video and more.

“Frequently a rented video that’s been buffered will get kicked from memory after watching an episode of a TV show or two on Netflix,” says Braun. “With console quality games weighing in in the neighborhood of a high-def movie, the most obvious thing that’d need to happen is an increase in storage capacity.”

The single-core A5 processor in the current Apple TV would need an upgrade as well, as it’s nowhere near the capability of the iPad 4’s A6 or modern console processors.

Apple currently has the capability to enable many types of app scenarios that utilize the iPad or iPhone as the processing power and AirPlay as the delivery mechanism. If you turn that over in your head a bit it becomes evident that Apple has two options:

Note that I don’t mention a full-on Apple television. I don’t because I essentially don’t think that matters from this perspective. It matters for Apple in terms of markets and margins, but the hardware for developers would no doubt be very similar either way. Unlike iPhones and iPads, there are only a handful of actual display resolutions for TVs on the market and those could likely be optimized for fairly easily. This isn’t a fragmentation nightmare as it is on phones and tablets.

If you believe that Apple’s going to take the second tack above, it’s going to have to set the ground rules very carefully. Simply ‘porting’ apps to the Apple TV isn’t going to cut it. This is going to necessitate a whole new way of thinking about the visual language and control schemes of apps.

“Ease of use is the biggest defining characteristic,” says Braun. “Currently you really have only directional and selection buttons to work with, and an app needs to be workable — and fast — with limited input controls.”

Expanding out from that would require a completely new method of controlling apps on the Apple TV, one that was both familiar and flexible. My vote has always been for a combination touch and voice controller that’s bundled with hardware. And then there are those iPhone game controllers. But whatever it is, it’s not going to be a stick-of-gum remote.

Regardless of what happens with apps, those alone won’t work. The foundation of Apple TV must be built on continuing channel deals with partners. That’s what has been going on for the past couple of years as the market becomes increasingly friendly to a-la-carte programming. Most users see the model of being able to purchase a subscription to a provider’s content without the intermediary of a cable or satellite TV provider as inevitable. Unfortunately, the economics still aren’t really making sense, and until they do it’s going to be an uphill battle to launch solutions that pull viewers away from those bundles — even if they still require validations and packages. 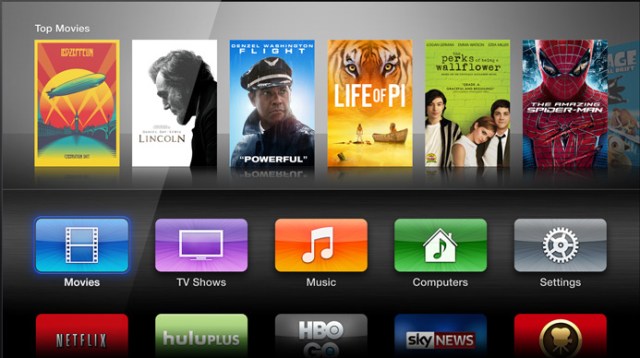 It’s a matter of familiarity and mindshare. As Apple is able to get HBO, Disney and others to launch apps on the Apple TV, it’s building a pattern of behavior in its users. If I subscribe to HBO currently and log in to my Time Warner account to watch the app, that’s all well and good for both sides of that deal. But every time I click on the app, that’s one more time I’m not watching the channel on cable.

Now, imagine if HBO decides to flip the switch to offer a-la-carte subscriptions at some point. I’m already conditioned to watch on-demand content on Apple TV — and now that content can be accessed without a cable sub. A simple popup informing me that I can save $x by subscribing directly with HBO would allow me to downgrade in a heartbeat and switch to a handy one-click subscription based on my Apple ID.

If I was a cable TV provider, i’d be getting hives every time a new icon appeared on the Apple TV, whether I was getting that customer’s money anyway…for now.

So, Apple will continue tiptoeing through the licensing minefield, preparing its users for a future killing blow.

There are also a bunch of other items that will need to be tackled, but shouldn’t be too much of a problem for Apple’s engineers. Navigating large libraries of movies, for instance, is an absolute pain in the butt. It’s not pleasant at all and the user experience is very poor if the library of films on your local computer is over a few hundred.

The key there would be to do what iTunes already does and merge personally owned movies and your iCloud library in one holistic offering. Then display them nicely just like the ‘Movies’ app on the Apple TV does and present more sorting options and we’re in business. This gives Apple a way to absorb media from outside its network and solidify those offerings as something you access ‘via Apple TV’.

The holy grail, of course, would be for Apple to strike a licensing deal that allowed it to offer an iTunes Match-like system for movies that uploaded the content to its servers and allowed you to watch them from anywhere. I’m not holding my breath, but it’s something to wish for.

Basically, Apple needs to make the Apple TV better for those users who have bought into its ecosystem hard. Making that experience more pleasant can only increase the spending there. Who knows, maybe the Apple TV will eventually be good enough to create its own ‘iPad-style’ halo effect — causing people to gravitate towards other products in Apple’s oeuvre.

I used to think that an SDK would come in the current Apple TV configuration in order to prepare a seed packet of apps for the eventual launch of a full-blown Apple television. But now, I’m leaning towards thinking that were going to see a big upgrade in hardware before we see apps, especially when it comes to control and navigation.

Almost all set-top boxes are terrible, with a few exceptions (like Roku, when is Amazon going to buy them anyway?) which hit around the ‘decent’ mark. Apple has the tools and the market position to make the Apple TV something really great. But, like the eye of Sauron, Apple must turn its full attention to ATV before we see big jumps in capability.

In the end, the ‘killer app’ for the Apple TV is probably not an app. Instead it’s probably some sort of watershed moment in ‘cable channel’ deals that doesn’t require an additional subscription fee. Along with that comes the ability to interleave those licensed channels with your own content in a seamless interface. And that’s a much harder problem than slapping an Apple TV on the back of a flat panel.