Bitmonet – think “Bitcoin Monetization” rather than “Bitcoin Impressionist Painter” – is a platform for creation microtransaction-based paywalls on your blog or content portal. While most people don’t like paywalls, most people are also going to have to start expecting them and this open source service definitely makes a lot of sense.

Founded by Bo Li, Ankur Nandwani, and designer Valerie Chao, the site adds very basic functions to your average blog. When you click on a link, a window pops up asking for a few cents to read a post and a little more to buy an hour’s worth of access or a day pass. This obviously requires access to and a willingness to use Bitcoin although you could pay in another currency. 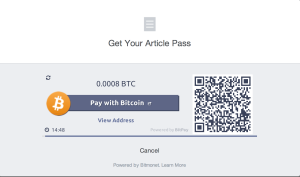 The team launched the app using the BitPay API, a service that allows for nearly seamless BTC integration. They have a full tutorial on how to implement the platform here. You can see a demo of the platform here. It is an open source project and the team is releasing the code today.

“I spend 2-3 hours every day reading news from all over the world,” said Nandwani. “Over the last few years I have noticed that more and more newspapers are setting up paywalls. Now if I want to just read an article, it doesn’t make sense to pay $20 for a monthly subscription. So I was trying to solve this problem. At the same time I was researching investment opportunities in Bitcoins by talking to people in the Bitcoin community, when this idea clicked to me and I ended up developing the prototype at the Bitcoin Hackathon.”

“Our goal behind BitMonet is to increase Bitcoin adoption. Hence we have made BitMonet free and easy to install. Also, it is completely customizable, giving the publisher complete control of how they want to monetize their content,” said Nandwani. “They can monetize a single [piece of] content, or they can offer time-metered subscription services.” 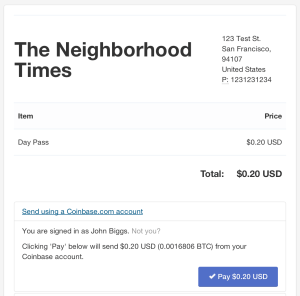 The team is focusing on publishers right now and will soon move on to game makers and other content creators. There are other services, like Gumroad and even Apple’s own payment system that creators can use but this looks to be one of the first with BTC support. While this is obviously still a niche tool, it’s interesting to see how seamless Bitcoin payments can be using open source and a little API magic.