Hyper-local news is hard and difficult to scale and monetize. CO Everywhere, which is the completely redesigned and rethought version of BlockAvenue, says it wants to fill in the gap between existing hyper-local sites and social media. The service lets you mark an area on a map that you want to watch and will then track every public social media update from Twitter, Facebook or Instagram (among many others), as well as reviews on Yelp and other services to present you with a feed of everything that’s happening in your area.

The service is now available on the iPhone and the team plans to launch apps for Android and the iPad soon. 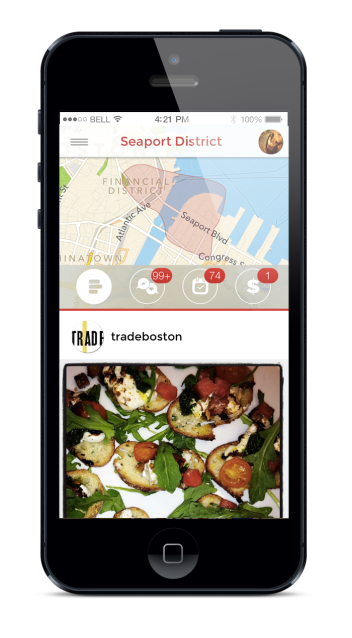 According to CO Everywhere co-founder and CEO Anthony Longo, users will find a lot of value in this stream of local information, whether it’s a tweet about local street art or a review of a new restaurant. Because it’s essentially an unfiltered stream, users in densely populated areas will likely want to keep the areas they follow relatively small while those who live in the suburbs may be better served with a larger area.

CO Everywhere allows you to follow multiple areas, too. In its private beta, the company found that most users follow around eight areas, though Longo expects that most users will likely follow fewer (home, school, work, their parent’s town, etc.) in the long run. The service also indexes local deals and events.

As Dan Adams, CO Everywhere’s co-founder and CTO told me earlier this week, BlockAvenue, which focused mostly on ranking neighborhoods, targeted users who were about to move into a new neighborhood. While this service allows the company to gather lots of interesting analytics, the team quickly started looking into how it could expand its feature set to get more regular users (people only move every now and then, after all).

The hyper-local space, Adams noted, is especially hard for a startup because a lot of the most interesting data is either not available through APIs, expensive or just simply hard to parse. In the runup to its launch, CO Everywhere decided to approach as many partners as it could in order to efficiently deliver relevant content to its users.

Even if you’re not all that interested in the app itself, it’s worth a quick download because of its design, which already follows most of Apple’s iOS 7 design guidelines and is one of the best I’ve seen in the hyper-local space in a long time.