Looking for someone to share your apartment on Craigslist can be a huge pain — so much so, in fact, that when my roommate moved out last year, I considered leaving the room empty. Thanks to some friend-of-friend connections, it all worked out in the end, but if it hadn’t, I probably I could’ve used a service like Livewith.us.

Perhaps the first thing to say about Livewith.us is that it’s not actually trying to compete with Craigslist. Instead, its creators expect users to continue posting and finding roommate listings on Craigslist. However, when the someone finds a listing that seems like a good fit, they can apply via Livewith.us. It’s there, in the latter part of the process — the part that’s largely conducted over email — that the site should be useful.

Both tenants (the people with an apartment who are looking for a room) and applicants have profiles on the site. They can use data imported from Facebook or they can be built from scratch. Basically, these profiles take the place of the copy-paste-bio-intro-email process and the awkward Facebook search that people might perform to learn more about future roommates. Livewith.us gives you the basic social context (including a list of mutual friends) that you’re looking for without showing you their drunk photos or whatever.

Plus, there’s no process of sending messages like, “Hey, we don’t know each other but can you friend me so I can see your profile?” 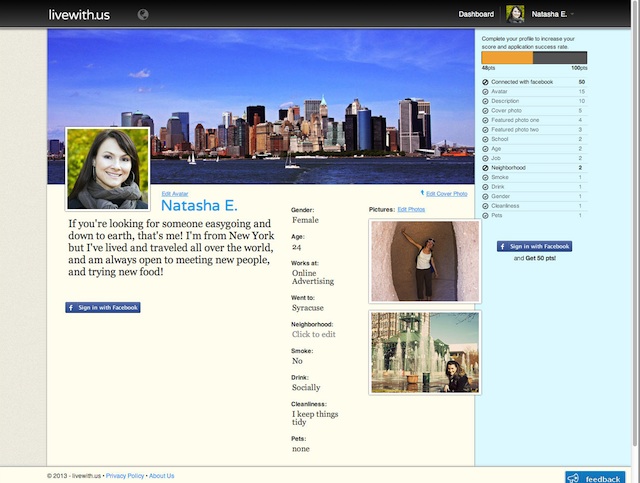 There are other workflow tools for both parties. For the applicants, there’s a dashboard where you can see the status of all your applications, and you can send follow-up messages if you want. For the tenants, a group of roommates can leave notes for each other on each application (the applicant can’t see those notes), and they can also sort applications into virtual piles of Yes, No, and Maybe. Once the applicants are sorted, tenants can send messages to every member of a group — for example, when someone has accepted a room, you can send a generic rejection to everyone else.

Zach Berke, CEO of Exygy (the company that created Livewith.us), said he’s hoping to create a “virtuous cycle” where tenants start using the service, which means applicants will start using it, too. Then they might convince other tenants to use it when they start their next apartment search.

Livewith.us is tackling a part of the housing process that’s been relatively neglected by startups. Berke said most other companies have a more pressing need to make money, so they’re going to try to get involved in the owner-tenant or broker-tenant relationship. Exygy, on the other hand, is an online services company, and it created Livewith.us as a side project. So if the project is useful and draws some attention to the company, then it’s a win.

That doesn’t mean Berke is totally opposed to making money. He described Livewith.us as the first of what will hopefully be a number of “self-incubated” projects that could eventually spin out if they do really well. There are areas where Livewith.us could charge a fee down the line, such as rental payments. And Berke also suggested that this approach could be brought to other categories, like applying for a job..

“We’re looking at building a With.us universe — we’ll start with Workwith.us and go from there,” he said.