Thanks to the JOBS Act and the rise of Kickstarter, Indiegogo and the parade of startups that have emerged in their wake, crowdfunding has gone mainstream. However, according to the minds behind Crowdtilt — the Y Combinator-incubated platform that caters to the many types of “group fundraising” that fall outside the purview of Kickstarter — this is just Phase One. The Crowdfunding Era is just beginning.

While the Kickstarters and Indiegogos continue to dominate headlines in the crowdfunding space, a growing set of niche platforms have emerged to handle the spillover from projects that don’t fit under the traditional umbrella. And some are bypassing platforms altogether: Star Citizen, a space-age video game, recently became the most successful crowdfunding campaign yet, raising a whopping $15 million — on its own site.

With projects like Lockitron, Basis and Myo also joining the list of projects that have raised big bucks without the help of traditional platforms, Crowdtilt founder and CEO James Beshara believes this is a strong indication of where crowdfunding is headed. The writing is on the wall.

That’s why Crowdtilt is today launching the first public version of Crowdhoster — its full-featured, open-source, customizable crowdfunding tool that will allow anyone to launch their own campaign without having to touch a line of code. Built using Crowdtilt’s API, Crowdhoster gives both individuals or businesses the ability to set up and own their own crowdfunding pages.

Unlike Kickstarter and Indiegogo, this means that your startup can now launch its very own campaign to fund the development of its Uber for cats app without having to cede control of branding, hosting and the ability to customize with all their favorite cat cartoons to someone else. At launch, Crowdhoster will enable individuals and businesses to not only launch and customize their own campaign, but also tap into a handful of themes that the site will offer to bypass the tinkering and get you up and running posthaste. 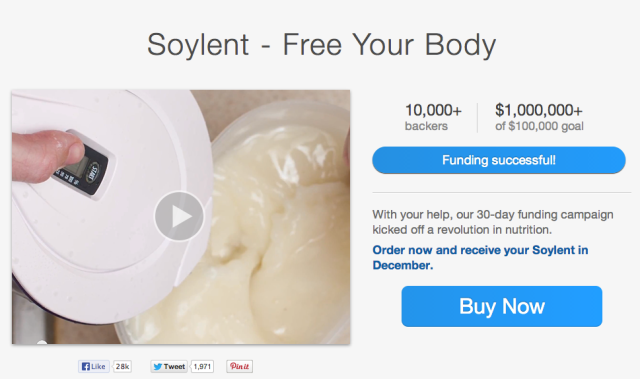 Or, for those who are in the tinkering business, because Crowdhoster is completely open source (the code is available on GitHub right … wait for it … hold … NOW), developers can improve, modify and customize the platform until the cows come home. And those not flying the old red, white and blue will be pleased to hear that Crowdhoster supports international crowdfunding, Beshara tells us. Together, these features are indicative of the type of support and direction Crowdtilt wants to take its new platform.

Beshara tells us that Crowdtilt wants to build (the first) open consumer brand within the crowdfunding space on top of a platform with a built-in developer ecosystem. The Crowdtilt co-founder believes that payments are eventually going to become another form of communication and that crowdfunding has the chance to help make that a reality. But, to do so, crowdfunding has to become open and accessible — for any topic, for anyone to use — whether it’s a political fundraiser or a hardware development project.

The other key is that Crowdhoster campaigns come with all the moving parts one would find on traditional campaign pages out of the box, like the ability to include a description, video and reward tiers, for example. But the owners don’t have to share any revenue or branding with a third-party platform. This could have big implications for the types of businesses or use cases which might shy away from crowdfunding campaigns for these reasons, like for a senator who wants to raise money for her re-election campaign, or for multinational brands like Nike or Coca Cola, which likely aren’t too keen to share branding with Kickstarter, for example. 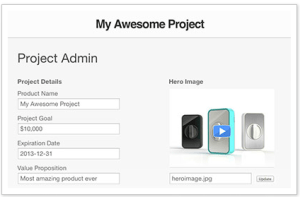 At launch, the free-to-use platform will enable users to run multiple, ongoing campaigns, customize the duration of their campaign, set reward levels and will offer project administration, checkout support and some basic, embedded CRM functionality to help manage communication with backers. Crowdtilt has a wait-list of 2,300 campaigns and, to get things started, the startup will be assisting people with setup and hosting it for them as well in an attempt to avoid down-time.

However, over the next few weeks, Beshara says, Crowdtilt will begin to automate the process, so that users will can point their domain to Crowdhoster and launch their campaign automatically, at which point users will be required to host the campaign themselves.

Although Crowdhoster has been in private development the last few months, Crowdtilt has been working with a handful of startups to test the new platform and has already had a few successes, including its first campaign, the much-buzzed-about nutritional drink, Soylent, which raised over $1 million through the platform.

While he’s more than a little biased, Beshara believes that there’s a huge amount of untapped potential in the wild and whacky world of crowdfunding, which has remained somewhat restricted by the predominance of vertical platforms. By bringing the same tools offered on the biggest crowdfunding platforms to the masses and by keeping it free, customizable and not requiring any technical knowledge to get a campaign up and running, Crowdtilt is essentially looking to do for crowdfunding what WordPress did for blogging and content creators.

Sounding like some kind of crazed crowdfunding zombie founder, Beshara says that his goal is to “infect the entire Web with crowdfunding” — presumably in the way that Facebook Connect infected the Web with your social graph — not in the way malware may be infecting your inbox or zombies want to eat your brains.

It’s too early to make any snap judgements, but it’s probably safe to say that these kind of open and accessible tools have been sorely missing in the Crowdfunding World. Crowdtilt is hoping that by getting this out the door now, it will give them a head start — because it’s only a matter of time before the crowd arrives and before the Joomlas, Drupals and Tumblrs of crowdfunding hit the streets. 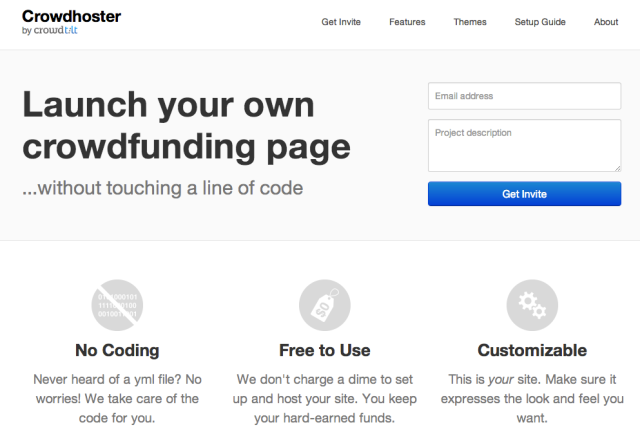 [Update: There seems to be a little confusion over the WordPress/Crowdtilt analogy, so thought it might be good to unpack that a little bit. I chose the analogy to WordPress, because WP set out ten years ago to build a publishing platform that would make it easy for everyone to do just that — mostly from scratch, not on top of someone else’s framework, relying on third-parties to help turn it into a platform within an ecosystem, with outsiders contributing plug-ins and add-ons and users paying for them for a price.

WordPress itself is also free, customizable, works for any type of publisher (not just a gaming magazine, for example) and, as implied above, is open source. Crowdtilt is similar in each of these ways — with the exception of the managed hosting of WordPress.com — though that may come eventually, just like WordPress has two flavors, WP.com and WP.org. (As mentioned in the comments, IgnitionDeck seems like a great option and has a ton of cool extensions and is certainly similar to WordPress. Though it still seems to lack fairly key similarities, namely being free and open source.)

Plus, nearly 20 percent of sites on the Web run on WP, Crowdtilt has similar ambitions for crowdfunding, and Crowdhoster’s business model will likely be similar to WP as well — in that both WP.com and WP.org are basically free, but eventually you’re going to pay for something, add-ons, access, hosting, etc. Lastly, considering Matt Mullenweg (the founder of WordPress) is an investor in Crowdtilt, it’s even more likely that they could be influenced by WordPress playbook for monetization and so on.]