As a quantified-self junkie and a huge slob, I enjoy attaching all manner of electronics to my body. That’s why I was excited about the LUMOBack. It’s basically a position sensor that you strap around your waist – under your clothes – and use to measure your posture and sleeping positions. It is, in a word, amazifuriating.

First, I think we all honestly need this thing. After years of being hunched over a keyboard, most of us look like Quasimodo’s tanned cousins. We could also try standing up a little more and maybe get out of the house once in a while. The LUMOBack helps on all these fronts. First, it buzzes when you slouch. Then, with the help of an iOS app, it tells you how many steps you’ve walked and how many times you stood up during the day. Future versions of the app will nag you more specifically, reminding you to stand every thirty minutes or so and offer more detailed feedback on your posture. There’s even a posture score that rates you compared to the average LUMOBack user. A little man turns from orange to green on your iPhone screen when you’re sitting up straight, allowing you to fine tune your posture. In short, it’s pretty amazing.

Even though it can do all that, however, I’m about to throw this thing into the East River. 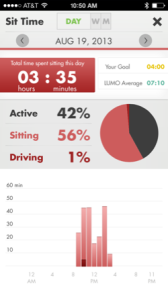 I would, if given the opportunity, love to punch this green guy in the face. He buzzes at me almost constantly. To be fair, my problems with the LUMOBack stem from my own poor posture. See, once you begin using the device you attempt to overcorrect. Move a little too far to the back and the green figure that represents you standing with perfect posture turns sad and orange. Then you get a buzz. Then, 11 seconds later, you get another buzz. Then the LUMOBand forgets about you for a while. And then it buzzes again. It’s like the scene in Ghostbusters when Bill Murray zaps the dude even though he’s getting most of the ESP cards right. 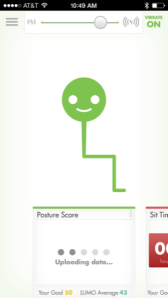 The LUMOBack means well. If you sit all day – I mostly stand these days, thankfully – then the LUMOBack might be just the thing for you. Seeing the little dude bent over and sad is impetus enough to straighten up and stand up once or twice a day. As an exercise help mate, however, you’re left wanting. I’d love for the device to help me maintain posture during squats, runs, and push ups but for the most part it’s not designed for that. The sleep positions are fun but not as helpful as, say, a Basis band. I’d also love to see a desktop representation of my crooked spine so I don’t have to unlock my phone, but that’s not yet available.

Obviously this is LUMOBack 1.0 and I’m willing to hand it to the creators – they made a very usable, very simple product that addresses a problem that we all have. Will it cure backaches? Probably not, but it will allow far more self-awareness in terms of posture and body positioning while we spend our long hours at keyboards, mice, and consoles. It is frustrating, to be sure, especially if you’re a pre-scoliotic mess like myself. However, it’s important. 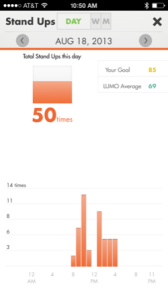 If you’re a quantified self fan, the LUMOBack can be another weapon in your probably already impressive arsenal. At $150 it’s kind of a single-use item (until the software gets better) so you’d better really be interested in your lower back if you strap this on. If you’re worried that you’re not standing up enough, however, then you can probably just set a timer or something and just sit up straighter. To paraphrase Dr. Steve Brule, it’s for your health, dummy. It’s not hard! Just please don’t buzz me again, LUMOBack. Please?