Today, the ‘Internet glue’ service IFTTT gets a fresh set of Twitter triggers that allow users to build recipes that react to tweets, favorites, retweets and more. This enables users to return to archiving tweets to Dropbox, saving links and images, building lists off of favs and much more.

IFTTT (If THIS then THAT) is a service that allows users to define a trigger (a new RSS feed item, a new tweet) and an action (tweet it for me, put it in my Dropbox) to form a recipe that can be used and shared. It connects dozens of different internet services together to make it easy to use the internet the way that you want to.

Just over a year ago, Twitter announced changes to its API for developers that effectively capped third-party clients, hardened the rules for displaying tweets and much more. As a result of those rules, IFTTT chose to voluntarily shutter its Twitter triggers until it could build ones that complied with the new rules.

It took a while, says Leor Stern, IFTTT’s Head of Business Development, for the company to get the bandwidth to revisit the triggers. Stern, who joined IFTTT earlier this year, says that they’ve been busy building out the platform and soliciting companies for newer, more robust triggers.

It’s worth noting that the original triggers were removed voluntarily by IFTTT, after the rule changes were announced by Twitter. Not that it would have had much choice in the end, as they didn’t jive with the new tweet display rules, among others.

In order to get the triggers back, IFTTT went to Twitter and talked them through the service, what it did and what it could offer both Twitter users and  IFTTT users. IFTTT, says Stern, has a vision of ‘scripting the ultimate way for people to personalize the way that they engage with the web’. The pitch resonated with the people at Twitter and they began working with IFTTT to get the new triggers built to comply with the new API and Twitter’s current vision for its own service.

It probably didn’t hurt, either, that it’s been a while since the changes went through, and things have calmed down a tad. After the changes were announced, there was significant backlash in the developer community and a general feeling of unease about how some apps would survive. There was also a period of flux in which some of the exact limits and strictures of the new rules weren’t clear.

Now we’re well clear of that and Twitter has settled into its new media role, and developers are working within the frameworks they’ve been given.

To that end, the new channel is launching with a concise set of Triggers and actions, and will be built out over time based on continued work with Twitter and user feedback. There’s already a bunch of new recipes that take advantage of the new triggers, which you can check out here.

The new triggers are ‘New tweet by you’, ‘New tweet by you with hashtag’, ‘New link by you and new favorite by you’. The new actions are ‘Post a tweet’, ‘Post a tweet with image’, ‘Add user to list’, ‘Update profile picture’ and ‘Update bio’. Some triggers have the ability to include regular tweets as well as retweets and replies. 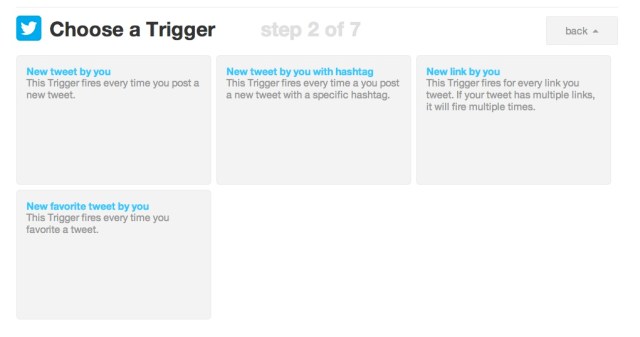 If you’re sensing a trend, you’re probably on the nose. All of the current triggers are based on handling your content, not anyone else’s. This is not about detecting tweets from other accounts and performing actions based on those. This is all about being a ‘personal tool’, at least for now.

But that doesn’t mean that you can’t mix and match data from outside Twitter and IFTTT to create some pretty useful stuff. I’m really happy, for instance, to regain the ability to automatically tweet based on specific RSS feeds. And those of you who are archive happy will love the actions that let you send every link you tweet to Pocket, or every image you tweet to Dropbox.

Here’s one that saves everything you fave to Pocket, for instance:

And there’s also some cool hardware integration stuff with Philips Hue and WeMo. This means you can, for instance, tweak the color of your lighting with a tweet: For now, the triggers and actions are fairly straightforward, but IFTTT, it says, is concentrating on rebuilding the Twitter channel to its ‘former glory’, if not more. So it should be interesting to see what they accomplish with official sanction from Twitter and a bevy of new users to tweak and prod new recipes into being.

Disclosure: IFTTT sent me socks a while back. They’re cozy, but it’s over 100 degrees every day here so I don’t really wear them.