Nvidia went a little outside of its comfort zone when it built the Shield, a portable gaming device based on essentially stock Android with an integrated hardware controller. I wasn’t sure what to make of it when it was announced: Was it a reference device for potential Tegra partners? Simply a showcase for what its mobile graphics processors can offer devs and device-makers? Or a true competitor to the 3DS and PS Vita, a genuine consumer product with true mass-market appeal?

After trying it out, I can say that no matter what Nvidia’s purpose was in putting together the Shield, I’m glad they’ve done so. More than my 3DS and Vita, this is a portable gaming console I could see myself using for a long, long time, and it is so much more than that. 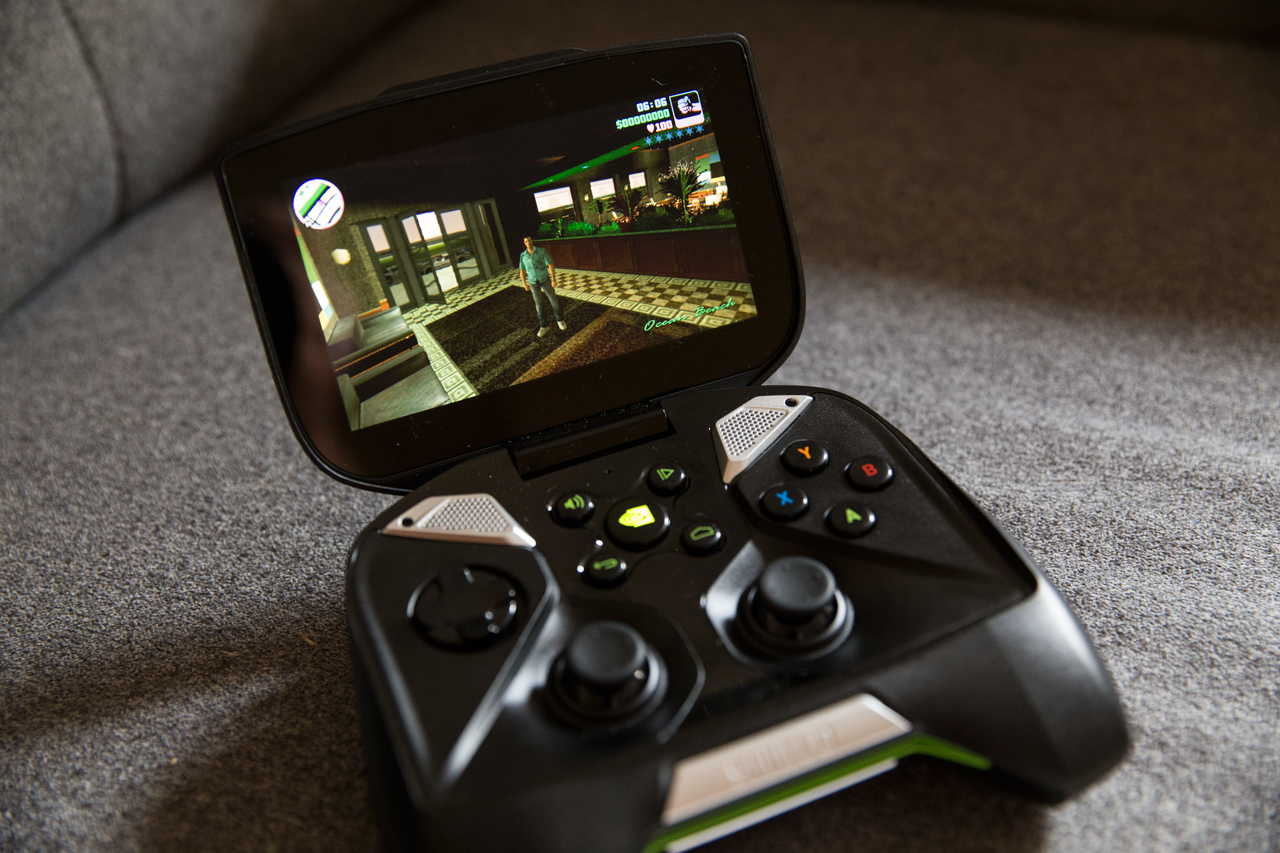 The Shield is more than just a mobile game console. First, it’s an extremely good mobile gaming console, better than both the 3DS and the PlayStation Vita (both of which I’ve owned). Dedicated big console aficionados might rake me over the coals for saying so, but even with the Shield’s limited initial library, it’s just better already. The games optimized for the device play great, and every game that has controller support works very well, too.

Also, the sad truth is that the Shield has a lot more future potential as a gaming platform than do either the 3DS or the Vita. Android accounted for 178 million smartphone shipments in Q2, according to a recent count by Gartner, which makes for a much larger audience than either the Vita or the 3DS (or both devices combined) currently enjoy. Content built specifically for Shield might not grow to epic proportions, but Android games that have controller support is a class of software that isn’t going to have any problems generating developer interest.

There’s also something about Shield that vintage gaming fans will love: It supports and runs a lot of the beloved Android emulators available, and it does so with panache. Remember, emulation is something you should only do if you own the original cart, but if you do, the Shield is amazing at this.

Doubles As An Android-Powered iPod Touch

The Shield lacks cellular connectivity, but it can do pretty much anything an Android-powered phone can do in terms of using apps and Google services, and the OS is basically stock Jelly Bean. There’s no obtrusive skin (the included Shield app runs like any other, and most definitely doesn’t count as bloatware), with the minor issues that it’s attached to a hefty controller and that it lacks a multi-tasking tray button.

Still, if you haven’t used an Android device and are curious about it without wanting to replace your phone or get a tablet, the Shield provides an accurate idea of what switching would be like. And of course, full Google Play store access means that this gadget also has a much better media and apps ecosystem built-in than anything Sony or Nintendo can manage.

A neat trick the Shield has in its back pocket specific to its Android roots is the ability to control a Parrot AR Drone. It accomplishes this task masterfully, making up for the sometimes-awkward, touchscreen-based control scheme typical of the drone with good old joypads that make it far less likely you’ll smash your drone into a wall. Trying the two methods side-by-side, there’s no question which I preferred: Nvidia could market the Shield purely as a high-end Parrot drone accessory, and I’m sure they’d sell more than a few to enthusiasts who took it for a spin.

It Streams PC Games – But There’s A Big Catch

The Shield has a beta feature that allows it to stream PC games over a user’s home Wi-Fi network via Steam, and it’s incredibly fun to do so. But there’s a catch: you need a GeForce GTX 650 or higher GPU in your Windows 7 or Windows 8-powered PC to get it working. And only a few games work for it currently – mostly those that have a console equivalent because of the button layout, though the pool should expand once the feature exits beta, according to Nvidia. 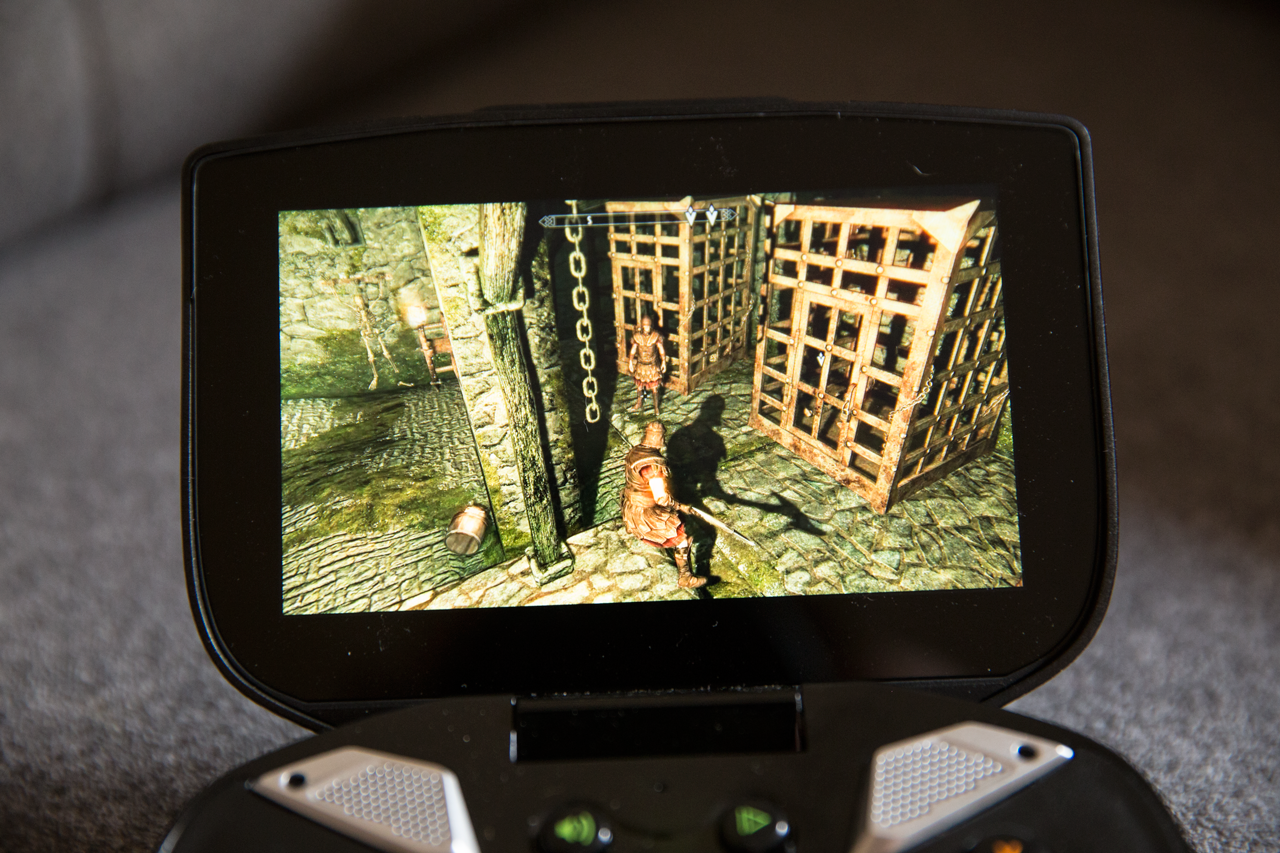 PC gaming worked very well with the Shield, but the telling thing is that Nvidia had to send out a Windows PC with a compatible GPU for the purposes of review so that I could test it out. Nvidia has built a gaming device that is aimed at gamers, but I bet that the Venn diagram of those prospective buyers who also have optimal setups for PC streaming probably doesn’t show overwhelming overlap.

And while I managed to stream games including Skyrim and Just Cause 2 seamlessly from desktop to Shield (with settings automatically tuned for optimal performance), these games aren’t designed to be played on a 5-inch screen. That makes a difference. More than once I found myself straining to see things that would be easy to spot on a larger display, but the overall experience of playing full Skyrim on the couch while another person watches TV, Wii U style but with better games, was amazing. 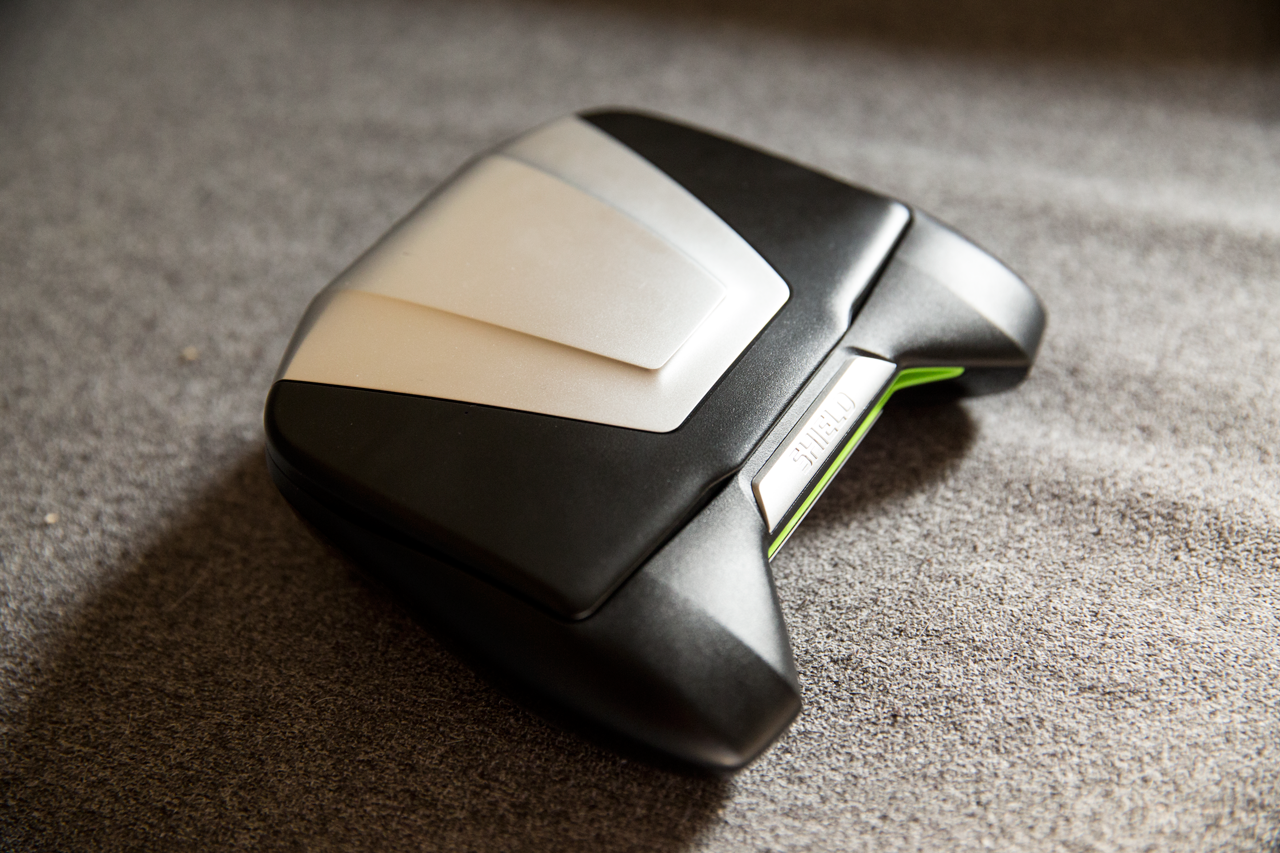 This generation of portable consoles has been a disappointment so far, which is why Nvidia’s surprise decision to enter the fray with an Android-powered alternative is so refreshing. And the Shield is excellent on its own merits, from the quality of the screen, to the battery life that managed around seven hours on average during my use, to the quality and ergonomics of the controller itself. With its HDMI-out capabilities, it’s also a better home Android console than an OUYA, so long as you’ve got a long enough cable.

The price of $299 is as expensive as some more affordable Android phones outright, however, and pricier than the Vita or the 3DS, but for those looking for this type of thing, it’s a small price to pay, on par with an Android tablet. As someone who owns both, believe me when I say that if you’re a gaming fan, you’ll get more use out of Nvidia’s quirky hybrid hardware than a slate running Android.