As low internet penetration stifled Facebook’s early growth in emerging markets in 2011, Indian startup U2opia developed an SMS-like system for users to post messages and read notifications by navigating through various menus via their keypad. Now, the analogue technology is being used by 10 million mobile subscribers in emerging markets, and boasts a million new sign-ups every month. However, the startup risks making itself redundant if it doesn’t grow with its increasingly digital user base. 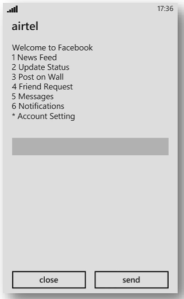 Indian startup U2opia worked closely with Facebook to develop an app based on the first-generation technology, USSD (unstructured supplementary service data). It leverages the carrier’s GSM systems to create a data session connecting Facebook’s systems and the phone user. Subscribers dial *325# to access numbered menus that allow them to read their news feed, update their status or post on their wall, and approve friend requests, all in real-time.

Launched on 17 May 2011, the fledgling startup would have to wait another ten months before reaching the million-user milestone, according to co-founder Sumesh Menon, but in the next 13 months it added another 9 million, and is now signing another million every month. Users pay about $1 a month for unlimited access to the service, but the telcos take the vast majority of this (In India, carriers typically take about 70 percent of the cut in these types of deals.) U2opia’s customers are spread across 25 countries which access the service via 40 carriers. In Africa, Facebook for USSD is how 80 percent of users access the social network.

“What we did was find a simple, inexpensive, made-for-mobile solution that was handset agnostic,” Menon said. “We looked at the lowest common denominator and realised there was a massively untapped potential base for working with poor infrastructure. We tried addressing these specific market issues.” 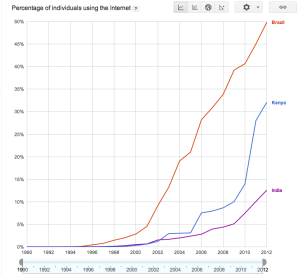 According to the International Telecommunications Union between 2010 and 2012 internet penetration doubled in India to about 12%; it more than doubled in Kenya to 32%; and grew by 10 percent in Brazil, spanning half the population.

There is obviously room to grow in these markets and Menon also has plans to expand in Eastern Europe, but admits the service doesn’t translate to internet-rich developed countries such as the US and the UK.

He understands the importance of developing a new business model to keep pace with his aspirational user base, who will ditch U2opia’s service and simply upgrade to Facebook’s app once they get their first job and buy their first smartphone. This is only a matter of time in these developing economies. His investors Matrix Partners, who tipped in an undisclosed amount in September 2011, will be closely watching.

Menon is beefing up his 100-strong workers with engineers to launch new apps that will focus on meeting new people.

“In some of these countries we’re adding more users than when we first launched however, we do want to address the issue of graduating users,” Menon said. “We’re piloting a different bouquet of products altogether. Something in development right now is around meeting new people and connecting with people based on their interest and conversation, rather than clear-cut dating app.”That’s something we’re evaluating because as these users mature and get into serious relationship mode, it starts to become relevant to connect to people with a different perspective.”