Chronos, a time-tracking application for iPhone that launched at last year’s TechCrunch Disrupt in San Francisco, is rolling out its first major update today with the debut of Chronos version 2.0. The app has been completely overhauled and now features a new user interface and a different approach to setting personal goals, like getting to bed on time, or visiting a new place, for example.

The app, previously incubated at Dogpatch Labs, was created by Stanford Business School grads Charlie Kubal, formerly of Pandora and Google, and Dylan Keil, previously a mechanical engineer. It’s generally aimed at so-called “quantified self” enthusiasts — those who like to gather data about their lives, activities, health, moods and more. This is a growing area of interest, especially in terms of fitness trackers like Fitbit, FuelBand, Jawbone UP, Shine, Withings Pulse, and others.

To some extent, the app has benefitted from this ongoing trend, and Kubal reports that growth has been “steady,” but declined to provide user numbers at this time. He did say, however, that it may appeal to those who are curious about the quantified self movement, but who aren’t ready to commit to a hardware purchase.

“While there are a lot people interested, peripherally, in the Q.S. movement, there are startup costs involved that are prohibitive. If you want to buy a FuelBand or Fitbit, you’re talking about 100, 130, or 150 bucks to get started,” Kubal says. “And for a lot of people, not understanding what that value is at the outset prevents them from hopping on that train.” On the other hand, he adds, Chronos is easier to get started with, as it’s just a free software download.

Chronos would one day like to partner with some of those fitness trackers for data import, but for now it can show you how long you were at work, what your sleep schedule is like, if you’re getting to the gym enough, how much time you spend on your commute, and more. 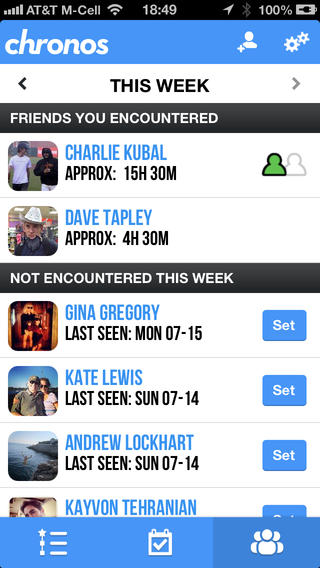 The other part of the app’s experience is that it can help you set and meet goals. For instance, if you wanted to exercise a certain number of hours per week, or spend more time with your family, in the earlier version, you would enter these into its settings, and it could tell you if you were successful in achieving those goals.

With version 2.0, however, the team introduced a new approach with goals. Instead of having to set these manually, Chronos today just tracks progress and trends automatically in order to be more of a “set it and forget it” kind of experience. The app now ships with 10 default goals that users can opt to check into by clicking “set” on the goal itself. They can continue to hit “set” on new trends that show up in the app over time.

If you choose to add friends, you’ll be able to record when, where and how often you spend time with them. Chronos will also send push notifications to help you stay on track. These are not nagging push messages, but rather positive reinforcements – like when you’re meeting or exceeding goals or setting personal records.

“A lot of users already have their guard up over push notifications,” Kubal explains. “So when we’re doing a push, it’s not only providing you with information, but you also have some sort of positive association with the app.”

You can now also long-swipe over important events to highlight them, which in turn features them when you review your time spent. And, at the end of each week, users get a custom infographic of their activities, showing you where you were, how you spent your time, trends, and scoring you on Work/Life balance and Exercising/Sleeping.

The original version of Chronos was a little rough around the edges — something that the company has tried to improve upon with the new user interface, which is colorful with big, bold fonts.

To date, Chronos has cataloged billions of location data points for its users, Kubal says. The San Francisco-based company raised a seed round of under $1 million in funding in December, led by Atlas Ventures and Draper Associates, which saw participation from other, undisclosed angels. The company plans to raise again by year-end.

It remains to be seen whether quantified self wearables will reach their estimated $1.5 billion market size by 2014 as predicted. But if the bands and gadgets help forge a new market, then apps like Chronos could continue as additional tools to organize and supplement that health data. (That is, if users don’t become too fearful of having his kind of personal info collected and stored on company servers in the wake of PRISM.)

The updated app is live now in the iTunes App Store here.