Editor’s note: Antony Brydon, an entrepreneur who has raised ten seed, debt, and venture rounds for four startups in the last decade and is currently a co-founder at Directly. Follow him on Twitter @abrydon.

Last week, my company Directly closed a $1.75 million seed round using an “inbound” approach to fundraising. In past ventures, we’d used the “outbound” approach that virtually all startups use – identifying investors, networking to coordinate calls and meetings, and working 1:1 to create demand. Our new inbound approach applied new marketing technology to crowdfunding sites to generate broad investor demand, track investor engagement, and transform the traditional and inefficient outbound fundraising process to an efficient inbound raise.

How much more efficient? In an outbound model, a strong startup is lucky to close 5 to 10 percent of investors contacted. In our inbound model, we closed 37 percent.

$1.25 million of our round came from investors we know well, including True Ventures, CrunchFund* and Toba Capital, as well as individuals we’ve worked with in the past, including Ray Lane and Esther Dyson. An additional $500,000 came through AngelList and SecondMarket via a strategic set of founders, senior executives and alumni from companies, including Dell, eBay, Facebook, Hewlett-Packard, IAC, McKinsey, Nuance, Oracle, PayPal and SAP.

This post will cover some of the things I wish I had known eight weeks ago. In it, I will: explain an inbound approach you can use in your next raise; describe tools and technologies you can set up in a few hours; and show you our detailed results, from first inbound contact to close.

Our overall approach applied the latest marketing technology and techniques to AngelList. We ran a campaign to generate inbound demand, hacked technology together for total investor awareness, and used a sales funnel to move from commitment to closing $500,000 from individual investors. Here’s how we did it, along with a few tips from our investor Gil Penchina, who helped design this approach.

The first and most important thing we did was to shift the way we thought about the fundraising from “outbound” sales to “inbound” marketing designed to generate demand. Instead of reaching out to specific investors who may or may not like our business and chasing them for calls and meetings, our goal was to maximize our initial exposure and create interest from folks already interested in our space and company. Tactically, this meant:

— Starting with a credible and connected referrer (in our case, Gil)
— Focusing on categories we care about (mobile, crowdsourcing, etc.)
— Enlisting 100+ of our friends on AngelList to share our profile
— Publishing updates regularly to our followers
— Publishing new investors in the round every 1-2 days

By treating this as a campaign, we were able to create a surge that brought us to the top 10 on AngelList and ultimately helped us reach No. 1 and be featured. Over three weeks, this campaign resulted in 650 follows and 150 inbound introductions. We accepted 97 of the introductions that were from individuals we thought were a good fit and closed 36 of them — a 37 percent close rate.

It’s important to note that we didn’t stop our direct pursuit of investors we wanted in the round. We pursued institutions and individuals outside of AngelList, but we folded these efforts into the broader campaign.

The right tools changed the game for us with an unprecedented level of awareness and visibility into interested investors. In a sales and marketing context, you might use Marketo and Salesforce.com to push out content, track engagement, score leads, and prioritize your follow-up. In a fundraising, you can use less expensive alternatives to get the same benefits. We depended on Clearslide (and their companion mobile apps); Rapportive (as a sidebar in Gmail); Gmail, Gmail folders, Gmail canned replies; and Angie (AngelList’s companion iPhone app).

Clearslide. Clearslide is an online service for hosting sales presentations. I uploaded the first half of the investor deck to Clearslide and posted the link on AngelList. I configured the deck to require the viewer to sign in with their email address, and then activated alerts that emailed me whenever someone signed into the deck. Finally, the last page of the deck teased about new service we are releasing and prompted the reader to request an introduction or email me for more information. This alone created many of the inbound intro requests. You can see this deck in action here.

Rapportive. Rapportive is a social sidebar for Gmail. When I received these email alerts in Gmail, the Rapportive sidebar would link to the AngelList and LinkedIn profiles of the investor viewing the deck. With one or two clicks, I could learn in detail about the investor and determine if they were a fit and worth pursuing. In general, I responded most quickly to investors that had made prior investments off AngelList and individuals who had expertise in the areas we care about.

Gmail, Gmail folders, and Gmail canned replies. I drafted canned replies in Gmail to help me respond quickly to qualified investors, and I could often send them a personal note (gleaned from understanding who they were from Rapportive) and the full investor deck while they were still viewing the initial deck. Gmail folders allowed me to create individual folders for key prospects, and since I was notified each time they opened the deck, this helped me “score” them: If an investor was opening the deck frequently, their folder contained more alerts and I knew they were interested.

Angie. Angie is a companion iPhone app for AngelList and alerted me each time an investor followed the company or requested an intro. It was useful when I was on the go and away from email, helping me to follow up quickly. It also sorted tasks well and I found the stripped-down UX a good complement to the AngelList website.

The result of sewing all these technologies together is that I was able to instantly understand who was viewing the deck and reach out to them, often while they were still reviewing the materials. This allowed us to go from interest to engagement quickly.

Use a Sales Funnel To Move from Commitment To Close

The last important thing we did was treat the investor funnel like a sales funnel, moving prospects through five defined phases:

Here’s what the same funnel looked like from a dollar perspective: 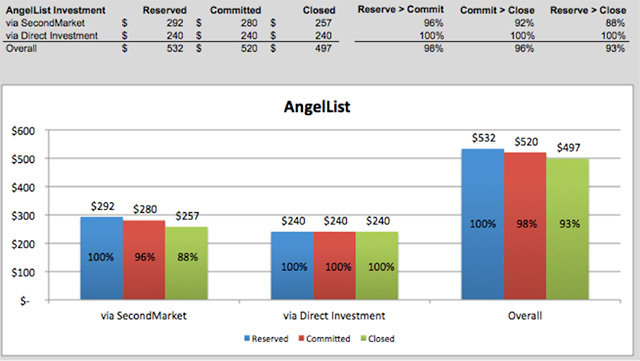 Because it was a funnel, we focused on yield – converting the reservations to close as efficiently as possible. We thought the “reservation” concept alone might lead to a lot of fallout (ask the maître d’ in your favorite restaurant about “no shows”), so we created a “commitment” step where we asked investors to send us complete investment information and to confirm their online reservation. This was effective: only three investors totaling 5 percent of the total dollars abandoned after making a commitment.

We also worked to minimize fallout over the weeks between initial interest and close. This meant a steady stream of updates – some delivered en masse, some delivered individually.

I didn’t go overboard. The trial versions of these services were inexpensive and took a total of two to three hours to set up and configure. And I managed the entire pipeline in Excel, even though we generally use Salesforce.com, because I needed maximum flexibility to reconfigure the spreadsheet on the fly (and because I was the only one updating the records). If you want a blank version of the spreadsheet I used, feel free to contact me.

If you’re tackling a big market with a strong team, strong investors and good early traction, AngelList can be an invaluable way to extend your round and your reach, and the right techniques and tools can transform an inefficient “outbound” fundraising exercise to an efficient “inbound” raise. Run a campaign to generate inbound demand, take advantage of the tools and technology that can give you precise visibility into investor activity, use a sales funnel to relentlessly close – and you will transform how you raise money.

I’ve always found fundraising exciting, but this is the first time it’s been fun.