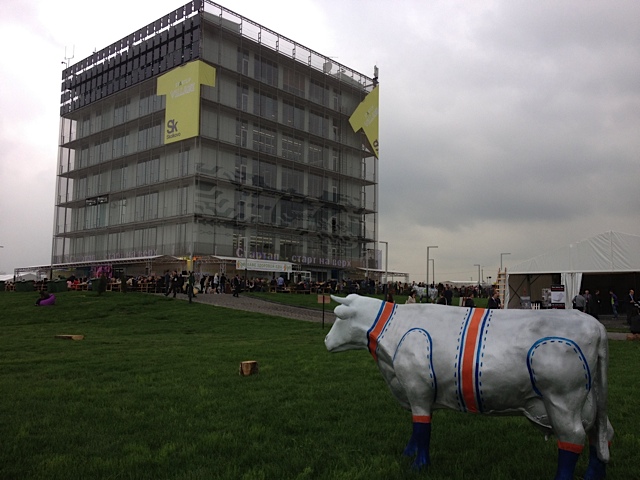 Skolkovo, the much debated public effort by the Russian government to kickstart a startup culture inside the country, said it secured another 135.6 billion ruble ($4 billion) commitment from the government through the next seven years.

With additional private investor money projected on top of the government commitment, Skolkovo’s new funding should total about $15 billion through 2020, according to a report in The Moscow Times.

Skolkovo is a massive government-led effort to diversify the Russian economy away from its dependency on natural resources and build an entrepreneurship culture inside the country. At its heart is a 1,000-acre site about an hour from central Moscow that is slated to become a hub for venture-backed startups, technical research and education.

Right now, the site contains a lone Hypercube — a steel, glass and concrete structure housing conference rooms and co-working spaces. It is basically surrounded by vacant plains at this point. Mike Butcher took a look at the project earlier this year in this feature.

Naturally, Skolkovo has also attracted its critics. Is the project too quixotic? Is it corrupt? These are issues that Russians in the startup community debate regularly.

Earlier this year, the project became embroiled in a corruption scandal, resulting in the resignation of Deputy Prime Minister Vladislav Surkov. Not only that, the project’s major backer has been former president Dmitry Medvedev, who took the role of prime minister after Vladimir Putin returned to power. There were questions about whether it would be as strongly supported under Putin’s regime, which may view Medvedev as a threat.

But this new commitment will apparently keep the project moving forward. Companies like Nokia, Siemens, Samsung and Cisco Systems have pledged to move research and development resources to the hub and Skolkovo says it has ties to about 1,000 startups and currently supports 13,000 jobs.

Skolkovo echoes the old secret technical cities of the Soviet era. It is a special economic zone that has unique tax breaks lasting five to seven years, its own border controls and legislative incentives for startups. It also has its own special version of the ‘Startup Visa’ with laws allowing foreign-born entrepreneurs to work there from other companies.

The idea is to circumvent existing laws in Russia, which are especially complex for new businesses. Many Russian startups I’ve met have decided to incorporate in Luxembourg or Cyprus where they feel the intellectual property protections might be stronger. Minority shareholders also have weaker protections in Russia as well, so venture backers might also prefer incorporation outside of Russia right now.