Mainstream music fans don’t want to constantly choose what to listen to, so streaming services are embracing radio. The latest is Rdio, whose new Friend FM turns your friends’ listening activity and social connections into non-stop streams. It’s also added a traditional Pandora-style You FM station thanks to data from The Echo Nest. Together they could let you productively leave Rdio on in the background.

While Pandora popularized adaptive online radio, it’s becoming an essential feature for all music services. Spotify added radio at the end of 2011, and Apple is gearing up to launch iTunes Radio alongside iOS 7 this fall.

Usually, adaptive radio stations build themselves off of your listening habits. That includes what you played, thumbs up or downed, and saved. This is how Rdio’s new You FM works, though it also factors in your Facebook Likes and Twitter Follows.

Rdio’s overhaul of Stations also lets your tune into any of yours friends’ You FM stations. Friend FM could get you out of your comfort zone and stumbling upon new artists you can then cue up on-demand. Maria FM could score me some new yoga music, while Alex FM would rock my bones with the latest new metal. Rdio says “It’s like flipping on the car radio and knowing every DJ.”

The cross-platform streaming service has also built a more immersive player for Stations, a better navigation system, Stations for genres, and an Auto-Play radio based on the last song or artist you were last listening to.

Rdio has some catching up to do. It doesn’t reveal its user counts but some peg it as much, much tinier than direct competitor Spotify which has 24 million active users, over 6 million paying subscribers, and brought in $533 million in revenue in 2012. While many say Rdio’s design is better, its marketing hasn’t been as aggressive and it fractured its attention to launch the video streaming service Vdio.

Rdio needs to lock in more casual listeners before iTunes Radio comes out or Spotify gets any bigger, otherwise it could be stuck with its stylish but small user base. You can’t make a business just selling to hipsters unless you’re Pabst Blue Ribbon. 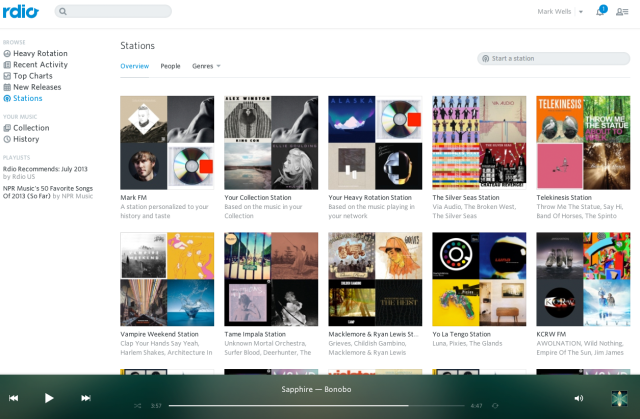