Editor’s note: Julie Ruvolo is a freelance writer and editor of RioChromatic.com. You can follow her on Twitter @jruv.

HotelUrbano offers hotel bookings and vacation packages in 35,000 destinations to a Brazilian user base of over 15 million registered users and 7.8 million fans on Facebook. The Rio-based startup closed 1.6 million travel bookings last year, generating over $120 million in revenue, and expects to double their revenue in 2013.

Insight Venture Partners led the $20 million Series C round, bringing the firm’s total investment in HotelUrbano to over $40 million. They are the exclusive venture capital investor in the startup since making a Series A offer three weeks into the company’s operation. Insight’s Bradley Twohig sits on the board.

Insight raised $2.57 billion earlier this year for their eighth fund in what is likely one of the largest raises for a venture fund ever. They have investments in Brazil’s e-commerce, software and social gaming verticals, including in HotelUrbano’s direct competitor, Despegar.com (Decolar.com in Brazil), a Miami-based online travel agency focused on the Latin American market, with about half its market in Brazil.

I asked HotelUrbano’s co-founder, João Mendes, if he thought that was a conflict of interest. “Insight is a silent shareholder in Decolar; they have about 4.5 percent of the company and no board seat,” he told me on a call from HotelUrbano’s Rio headquarters. “It’s funny because Accel is also an investor in Decolar and tried to invest in us in a previous round, as did Sequoia.”

Mendes says the co-founders parted with about 4 percent of their equity in the Series C based on an April valuation of about $250 million. The company has since doubled its revenues.

Exame also reported that HotelUrbano received and declined acquisition offers from travel behemoth Booking.com, and from The Carlyle Group, which controls CVC, Brazil’s largest tourism company. Mendes declined to comment on the acquisition offers, but indicated the co-founders have their sights set on an IPO and want to become the first Brazilian company to go public on the NASDAQ.

Brazil’s tourism industry represents about 4.5 percent of the country’s PIB (GDP), with revenues of $65 billion in 2011 and a growth forecast nearly doubling by 2021.

Only about 20 percent of tourism sales are made online, in contrast to about 60 percent in the U.S., but the numbers are growing. eMarketer pegs Brazil’s online travel industry at $7.5 billion and projects it will reach nearly $12 billion by 2016, when Brazil hosts the Summer Olympics.

When HotelUrbano launched in 2011, the only player in the online travel space in Brazil was Decolar.com, which focused exclusively on airline bookings. Mendes says he and his brother Jose Mendes saw an opportunity in the higher-margin hotel booking segment, which Amsterdam-based Booking.com dominates globally.

HotelUrbano started off as a collective buying site in the vein of Groupon and Brazilian-based PeixeUrbano, but pivoted to an online travel agency model within a few months to offer more flexible features such as choosing your travel dates. They reached $39 million in revenue in the first year of operation, $121 million last year and expect to double that number for 2013. 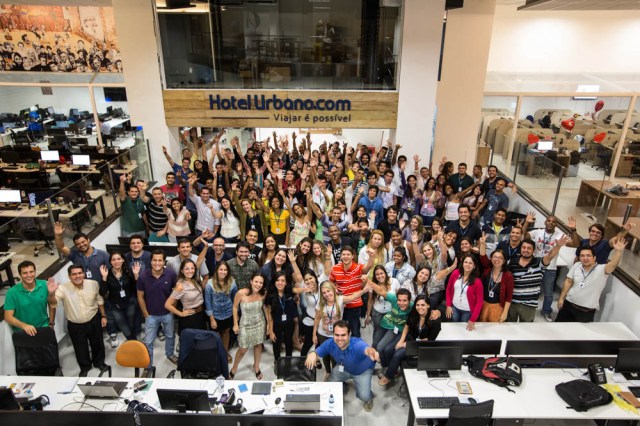 Mendes takes pains to frame the growth as aggressive, but healthy – perhaps referencing the growth hype Groupon and PeixeUrbano have suffered. The company broke even in the first quarter of this year, turned a profit in the second quarter and expects to be profitable for 2013.

Hotel bookings represent more than 60 percent of HotelUrbano’s revenue; the remainder is sales from travel packages. They have yet to expand into Decolar’s territory of airline ticket sales, although they are launching a dynamic travel package product next week that will allow users to create customized vacation packages with hotel and flight bookings.

Decolar, on the other hand, moved into HotelUrbano’s territory last year, expanding their product offering to hotels, car rentals, cruises and travel packages. They told Valor Economico their goal is to make hotel and travel package sales 40 percent of their revenue this year.

Mendes, while citing Decolar as their biggest online competitor, seems unconcerned. “They are trying to change their position from airlines to hotels, but they still have over 90 percent of their top-line revenue coming from airlines, which are very small margins.”

“I’m optimistic because the online travel market is still very small in Brazil. And when you look at online penetration in any segment — retail, fashion, movies — when you see penetration improve over 20 percent, the next step is you see offline companies not doing very well, and online companies growing their share. So CVC is a big competitor, but we believe the online environment will be much bigger in the near future.”

HotelUrbano focuses exclusively on selling to the Brazilian market, although they plan to use the expansion capital to launch in other Latin American markets. The site currently offers hotel and travel packages to 35,000 destinations in 83 countries, and about 80 percent of travel package sales are to international destinations.

Mendes explains that Brazilians pay upwards of 8-9 percent on their credit card carryover balance, so people like to purchase in installments. It’s part of the purchasing culture to see price expressed in fractions, whether you’re window-shopping in Ipanema or booking travel on HotelUrbano.

Another thing we know about the Brazilian market: They dominate social media. Brazil is the second-biggest market behind the U.S. for both Facebook and YouTube; Twitter says Brazilians are one of their five most active user groups, and opened offices in Rio earlier this year. The Wall Street Journal pegged Brazil as the social media capital of the universe.

HotelUrbano has exploited this cultural characteristic to the max. Co-founder Oliveira runs the social media efforts that have made HotelUrbano the most popular travel brand in the world on Facebook, with 7.8 million fans. HotelUrbano is the fourth-biggest brand among Brazilians using social media, behind only beer and fashion brands.

Mendes says the company has been committed to marketing on Facebook since day one. “We heard a lot of people say you can’t make money investing on Facebook or have a good ROI on Facebook, and we proved that completely wrong. But you don’t have to be in a rush on your Facebook strategy, and that’s the problem for most people looking for performance on Facebook.”

“We did things differently than just looking at ROI. We’ve tried to make people like us and interact with us, tried to understand their needs, and then we started to push things to them. If you consider the latency, the lifetime value, Facebook is one of our best marketing channels.”

HotelUrbano spends about $2 million a month across social media, search and promotional channels, with a marketing budget of $30 million for 2013. They push out monthly travel promotions at a low-to-zero profit margin to try to make more people travel.

“We’re not just looking at revenue, but looking at giving back. We have great margins, over 30 percent gross margins, but every month about 5 percent of our revenue comes from very low margin deals,” Mendes explains. “So if we help people travel on a product this month with no margin, we still have 32-34 percent margins on over 95 percent of our top line revenue. If we try to interact with people every month and deliver something very cool, they feel special, and we have repeat purchase rates and customer loyalty growing.”

Mendes says 95 percent of HotelUrbano users surveyed would recommend the brand to a friend, and they maintain an average Net Promoter Score (NPS) of 60 (anything above 50 is considered excellent). They look at repurchase rates as one of the principal indicators of client loyalty, but not the only one, and measure their marketing campaigns more holistically against lifetime value, cohort, NPS and repurchase rate.

The site has over 150,000 customer reviews, with plans to launch a TripAdvisor competitor later this year. They are also planning product launches in mobile (less than 8% of bookings currently come from mobile) and social, with the ambitious goal of launching the most downloaded app on Facebook.

They have also launched retail concept stores in Rio de Janeiro and the city of Campo Grande, and have seen the average booking jump from $600 online to $2500 in-store.

But the primary focus remains on the hotel business. Brazil is doubling down to build hotel capacity to accommodate the influx of millions of tourists for next year’s World Cup and the 2016 Olympics. Mendes expects a jump from 450,000 hotel rooms across Brazil to 800,000-900,000 in the next few years.

“Las Vegas gets 50 million tourists a year. Paris gets 100 million. Brazil gets only 5 million across the entire country,” Mendes says. “One scenario is that Rio will become what Barcelona became after they hosted the Olympics. This is a city that didn’t receive many tourists and today is one of the top 10 travel destinations in the world. When we go international, we can make people think twice about going to Cancun or Miami, and bring them to Rio, Florianopolis or Salvador.”

Referencing the rumored acquisition offers by Booking.com and The Carlyle Group, Mendes says, “Booking.com is the most valuable online travel agency in the world. They’ve become a global brand. A lot of Brazilians build great things but get comfortable when they have good market share in Brazil. That is not our focus. We want to build a global brand, because we don’t have a Brazilian Internet company that has become global yet. We want to be the first Brazilian company to go public on the NASDAQ.”

A law school drop-out who started his first startup in his garage, Mendes says, “We want to inspire other Brazilian entrepreneurs.”