Getting a cab in Mumbai isn’t the same as it is in other countries, according to one of the taxi app startups in India.

Olacabs‘ co-founder, Bhavish Aggarwal, said it’s harder to flag down a cab in India’s financial capital because there are fewer of them plying the streets. For Mumbai’s 15 million people, there are just 60,000 taxis running around.

Car ownership stands at just 2 percent, with private cars owned by the wealthy and the masses relying on public transportation. As a result of the cab situation, more people rely on auto rickshaws for transportation, which can be found more easily and cheaply, to boot. 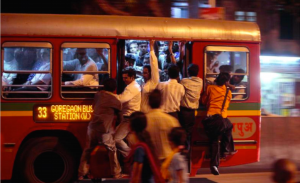 “But the country is progressing and people have more disposable income. Not everybody wants to take a crappy auto rickshaw if they’re dressed nicely, for example,” he said.

Olacabs is part of a crop of taxi booking apps that have risen in recent years to target the growing middle class which can afford to take cabs.

It operates in Mumbai, Delhi, Bangalore and Pune for now, and competes with several other startups.

A competitor, Meru Cabs has taxis in Bangalore, Mumbai, Hyderabad and Delhi, and has a slightly bigger fleet than Olacabs’ 5,000 cars. There’s also Easycabs, TaxiPixi, Getmecab, and Taxi Cab Hire India, to name others.

They’re all eyeing a slice of an estimated $6 billion cab market in the country.

In order to compete, Olacabs has devised some clever technology in hopes of closing the gap between India’s infrastructure issues and providing a cab more reliably than its peers.

Each of its drivers is given an Android phone to take bookings. But the secret sauce is that each phone helps to form a live heatmap of traffic in the cities. 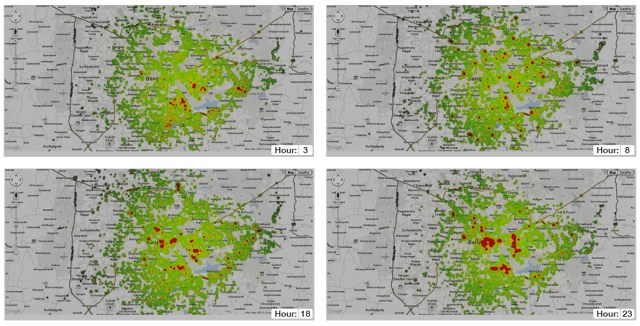 With about 1,000 cabs going about in each city, that live traffic data is used to create traffic reports for drivers, and notify them of ongoing jams.

Aggarwal explained that the roads in many parts of India aren’t in great condition—they suffer from potholes, and poor drainage means routes often get blocked off when it rains.

The booking information is also crunched by Olacabs to help predict taxi demand ahead of time, and sends more drivers out to areas expecting bookings so that they can respond to online bookings sooner.

Olacabs has worked in additional tools to its driver interface as well. Eschewing regular Google Maps data, the company has provided its own mapping layer that it says is more accurate, and translated to local dialects for drivers.

“There’s a huge problem with the address system in India, and the addresses aren’t in order,” he said.

The Android devices do cashless transactions. They’re outfitted with credit card readers similar to the Square reader, and allow drivers to swipe credit cards for payment. They can collect that payment later at Olacabs’ office.

The app starts its meter when the journey begins, and processes the eventual fee for drivers when it ends.

This has helped it prevent any fraud from drivers, because the company is able to track how much it’s owed (it takes a 20 percent cut of the trip fare).

Olacabs was founded in January 2011, and raised an undisclosed Series A from Tiger Global in 2012. The round was “in the millions”, said Aggarwal.

He and co-founder Ankit Bhati went to IIT Bombay, where they met. The company has 350 employees, of which about 50 are engineers.

A sizeable proportion of this staff are in the call center to take bookings, with about 70 percent Olacabs’ total coming in through the phone. Users can book a cab through its website, and also through Android and iOS apps.