In February, Brown filed a suit against Snapchat claiming that he has been robbed of his stake of the company. Since then, we’ve heard from sources and court documents that Brown was heavily involved in the early stages of the company. Spiegel has even admitted that Brown came up with the idea for a disappearing-messages app.

Now, we’ve learned that, despite his significant involvement, Brown may not have had equity in Snapchat.

In the summer of 2010, Evan Spiegel and Bobby Murphy had just completed their sophomore and senior years at Stanford, respectively. They were working on a startup called Future Freshman that would help high school kids get advice and help with applying to colleges.

Spiegel and Murphy split equity in the startup, but it failed to gain traction and the two eventually gave up on it in March 2011.

In April, Brown, self-described as close friends with Spiegel at the time, came up with the idea for a disappearing-messages app. Brown went to Spiegel with the idea and they recruited Murphy to join them and program the app, initially named Picaboo.

In the summer of 2011, the three were living at Spiegel’s father’s house, on Toyopa Drive in Los Angeles, and decided to rename Future Freshman LLC as Toyopa Group LLC.

“We discussed that change together,” Brown said about renaming Future Freshman LLC Toyopa Group LLC, but he notes, “I didn’t understand it as the same company.”

In a July 13, 2011 email, Brown sent Spiegel a draft of a press release for Picaboo, in which he wrote, “Picaboo is a licensed product of the Toyopa Group, LLC.”

Despite understanding that Future Freshman was renamed to be the Toyopa Group, which owned Picaboo, Brown seems to have thought he had equity in the Toyopa Group, as Picaboo was his idea and he was working alongside Spiegel and Murphy on the project.

Spiegel and Murphy seemed to think that they had all of the equity of the Toyopa Group, as it came from their joint venture, Future Freshman.

When asked in his deposition if he thought that Brown knew he had no equity in Future Freshman, Murphy said, “I don’t know what he believed. All I know is that, again, he was invited to join us that summer, do some work.”

One night that summer, the three had a drunken argument over Brown’s role in the app; the next morning, they talked more level-headedly about Brown’s contributions.

“Essentially, they were talking about switching me out for a different marketing person,” he said in his deposition. “So, you know, I had to protect myself. Who is not going to protect themselves in that situation?”

A source told me in February that Brown would go out constantly, partying at all hours and not working on the app, while Murphy coded and Spiegel worked on design. The source says Brown added virtually nothing to the team beyond the initial concept.

On August 11, 2011, Brown filed a patent entitled, “Timed, Non Permanent Picture Messages for Smart Phone Devices,” that listed his home address and contact information as the sole contact information, and listed Murphy, Brown, and Spiegel as the co-inventors, in order.

On August 16, Brown, Murphy, and Spiegel had an argument on the phone during which Spiegel was offended that his name was listed last. Spiegel hung up and allegedly changed the passwords and forced Brown out of the company. After the call, Spiegel texted Brown, writing, “I want to make sure you feel like you are given credit for the idea of disappearing messages.”

“In the last phone call before account passwords were changed, the point of that was, again, Evan and I had a prior conversation in which we expressed concern that [Brown] would ask for equity,” Murphy said in his deposition. “And we knew that he had the original patent applications in his control. So in that phone call we wanted to hear what he thought he was entitled to given the work–given the work he had done. He, I would say, exaggerated that. And Evan [Spiegel] hung up and I think he–I don’t remember specifically what he was asking for, but it was a lot more than we would be willing to give him.

“He claimed that he had created the original idea and that he had designed the ghost,” Murphy continued. “And there was some disagreements between Evan [Spiegel] and Reggie [Brown] about what that meant.”

After Spiegel hung up, Murphy says he stayed on the phone and listened to Brown, who Murphy says asked for equity “somewhere in the range of maybe 30 percent.”

On May 6, 2012, The New York Times’ Nick Bilton wrote about Snapchat and its prowess as a sexting app in the first major media coverage of the app.

On May 8, Brown emailed Spiegel to settle the matter. “I understood both then and currently that my role in the process was of a different nature, and was thus willing to accept a significantly less portion of equity than either of you,” Brown wrote.

He said he spoke to patent lawyers, who told him “due to the provisional patent application…I still currently own a third of SnapChat’s IP.”

The patent Brown filed has not been approved by the U.S. Patent Office, and could have been removed by Brown, Spiegel, or Murphy at any time. 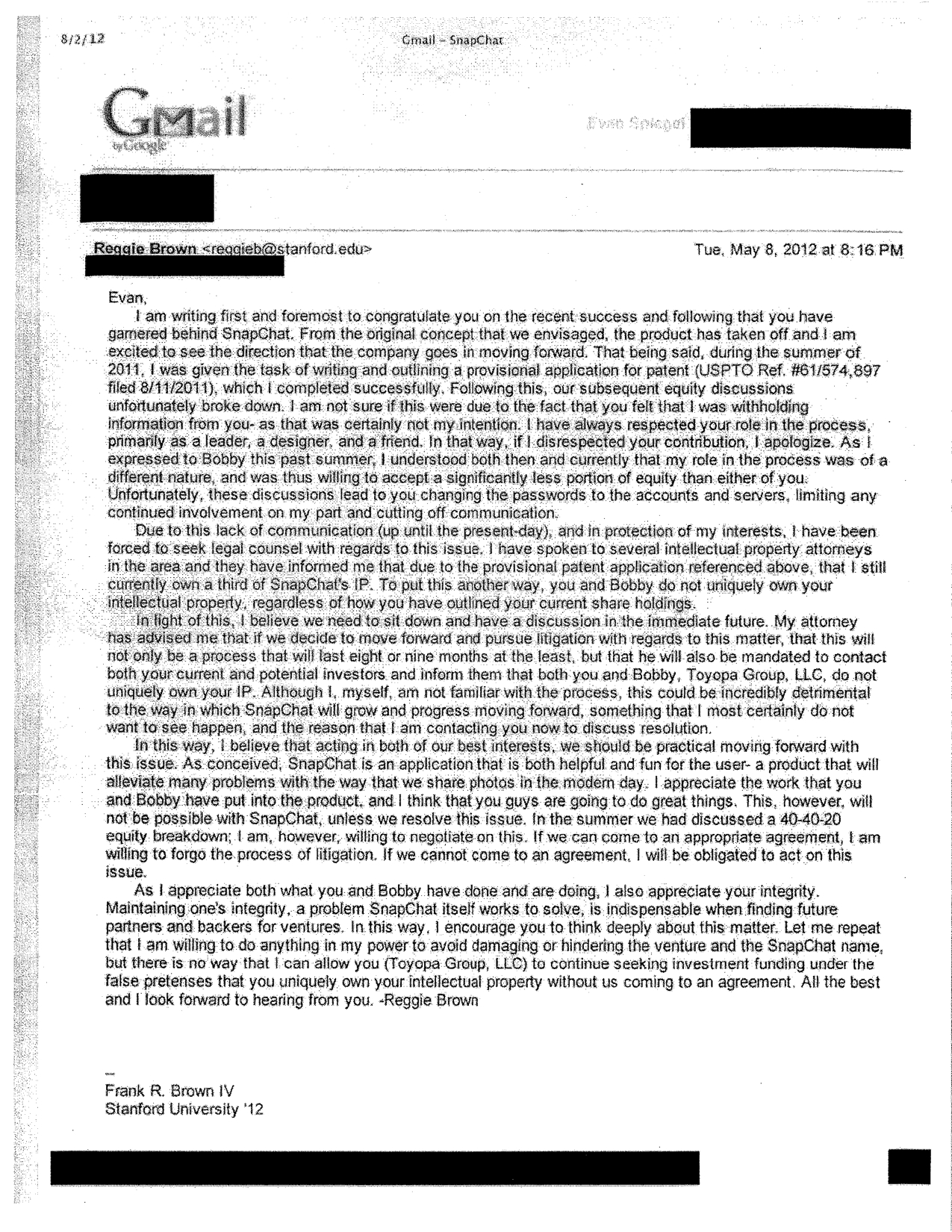 “In the summer, we had discussed a 40-40-20 equity breakdown; I am, however, willing to negotiate on this,” Brown continued in his email. “If we can come to an appropriate agreement, I am willing to forego the process of litigation.”

Brown is now suing for a full, undiluted third of the company—which would currently be valued at around $267 million. His claim is mainly based on the patent application, which has not been approved, his initial idea for the disappearing photos app, and his early role at Picaboo and the Toyopa Group.

So far, we haven’t seen any evidence of a written agreement stipulating how the equity of the Toyopa Group was to be divided. We may get a bit closer to the truth at tomorrow’s hearing, during which a judge will rule on Brown’s Motion to Disqualify Quinn Emanuel from representing Snapchat.

Brown’s representatives, Lee Tran & Liang, filed the motion because Brown spoke with and sent documents to a Quinn Emanuel lawyer, Anthony Alden; Alden later said Quinn Emanuel would not be representing Brown, and a few months later, Snapchat hired Quinn Emanuel. The firm has erected an ethical wall, shielding Quinn Emanuel employees from discussing anything related to the case with Alden, but Lee Tran & Liang argue that this is insufficient and that Quinn Emanuel should be disqualified based on precedent.

The legal documents, which are at times dry but do feature a naked man gesturing to Brown during a deposition and a brief mention of my female colleague Jordan Crook and myself, are below. 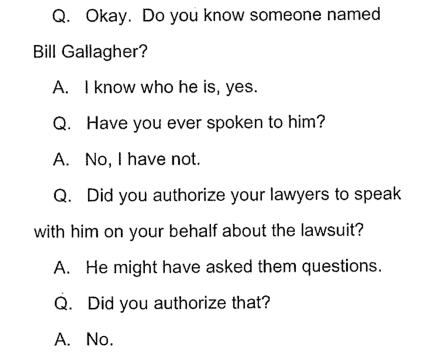 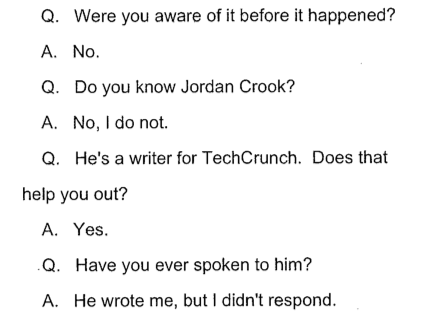 The six documents filed by Snapchat, totaling 185 pages, on July 19, are below in what I think is descending order of interest to readers:

The five documents filed by Brown’s representatives, Lee Tran & Liang, totaling 120 pages, on July 25 are below in what I think is descending order of interest to readers:

Disclosure: I am currently a rising senior at Stanford and the president of the Stanford chapter of Kappa Sigma. Brown, Spiegel, and Murphy were all members of Kappa Sigma at some point during their time  at Stanford. By the time I joined the fraternity, in the spring of 2011 (my freshman year), Murphy had graduated from Stanford, and Spiegel and Brown had left the fraternity.

I have never met Brown. I’ve met Murphy once. I have gotten to know Spiegel since the spring of 2012, mostly through interviews for TechCrunch. This in no way affects my objectivity or ability to report on this lawsuit or the company.