Sam Brin, 26-year old younger brother of Google co-founder Sergey Brin, has spent the last few months in a bit of borrowed office space with college pal Jon Li quietly building a startup of their own.

Sam And Jon’s company, Butter Systems (part of Y Combinator’s Winter 2013 class), wants to put a tablet at your table. The tablet would supplant (or augment) a restaurant’s paper menu, allowing customers to order food and drinks, or request their check without having to flag down a server. They’re quick to clarify that they’re not trying to replace the server — they’re just trying to make the server’s life easier, while bumping up the amount that restaurants pull in per table. As Sam put it, “We want to increase sales by making it easier to order more, all while keeping that human touch.”

When a customer is seated, an Android tablet will be waiting at the table. They’re free to order from their server as they normally would — but if their server is busy helping others or is otherwise unavailable, the tablet serves as the next best option. On the tablet is Butter’s own fully customizable digital menu system, running in a locked-down, Menu-only mode that makes it challenging for the curious tinkerer to use the device for any unintended purposes. Butter provides the tablets, prepped and ready to take orders out of the box. 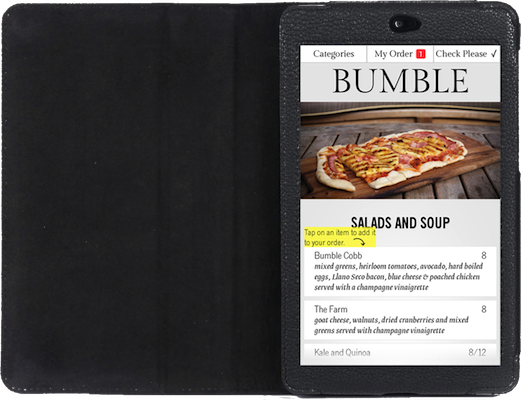 Once you’re done eating, a “Check Please!” button lets the server know that you’re ready for the bill. There is no method for paying for the meal directly through the app at the moment, a decision they made to further maintain that aforementioned human aspect of going to a restaurant.

On the restaurant’s side, orders come in by way of a counterpart app running on a tablet next to the POS. When an order arrives, it flashes red until someone on the waitstaff looks it over and confirms it before sending it off to the kitchen — that way, a customer can’t accidentally order 55 steak dinners. Restaurant owners can adjust their menu on-the-fly through a web interface, tweaking prices and adding/removing items or promotions as the day goes on. 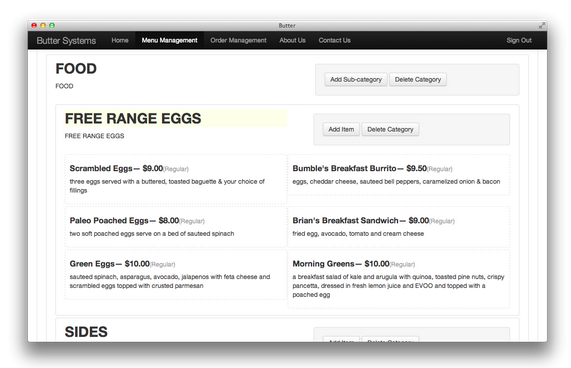 Now, before you run for the nearest rooftop to shout that tale of nepotism brewing in your lungs, I must say: in a startup scene so driven by its often off-putting bloodthirst for growing one’s “network,” it’s actually kind of shocking how little Sam seems to be tapping those familial ties. Sure, that last name can presumably open a few doors — or at the very least, open already-ajar doors wider — but he doesn’t seem to be trying to exploit it. Their original email pitch to us only mentioned the relationship in passing in one of its very last lines, long after explaining what the company did. I sat and talked with Sam and Jon for a few hours, and the pair only brought up Sam’s brother once, and that was to tell the story of how the idea for an upcoming feature came about. Sergey is Sam’s brother and an advisor (not an investor) to the company, but this is Sam and Jon’s ship to steer.

Bloodlines aside, I foresee at least two challenges: theft of the tablets and the difficulty of scaling sales.

In Butter’s test location, the tablet comes as you see it in the video above, resting on each table in a snazzy, lightweight leather folio. That might work well at a single, quaint location with relatively low customer turnover; but if they want to find themselves in hundreds of restaurants of all shapes and sizes, they’re going to have to deal with the fact that people, as a collective, can be terrible. People will steal these tablets. They’ll have to figure out how to keep them safe, be it latching them to the table (which is kind of ugly), or perhaps some sort of proximity-based alarm that starts squealing when you take the device out of a certain radius.

Second, they’re going to have to figure out how to get restaurants on board at a rather low acquisition cost. As many a startup before them have found, convincing a restaurant to change their structure and workflow in any way can be quite hard. Convincing enough of them to make the venture profitable? Monumentally hard. There are many, many others in the space, like E La Carte (or iMenu, MenuPad, or countless others) who have been attacking this problem for a while with varying degrees of success. Butter says that word-of-mouth alone has gotten them a steady flow of referrals so far, and they’re planning to give restaurant owners 30-day free trials to help seal the deal.

How they’ll charge after that trial, though, is still up in the air. They’ll either charge a one-time setup fee (that would include the cost of the devices, shipped with the menu ready to go), a monthly subscription fee, or some mix of the two.

One particularly interesting concept that came up during our conversation, and one that Sam and Jon say they plan on tackling, is that of analytics. What if the menu could essentially A/B test itself, finding the right item descriptions that lead to the most sales? Do you sell more drinks when they’re at the top of the menu, or at the bottom? Do pictures help or hurt? Access to that data (and being able to test changes on the fly with no reprinting cost) is perhaps the biggest advantage that a tablet-based menu has over its paper twin. Make it happen, guys!

Butter’s menu is currently in testing at Los Altos’ Bumble (a restaurant which Sergey invested in as part of his Los Altos project), with plans to expand to more locations in the coming weeks. Interested restaurateurs can hit up Butter for more details here.