Nobody has ever accused Amazon Web Services of hiding its complexities. It seems even Amazon acknowledges that getting started with its ever-expanding cloud services platform isn’t easy. For a while now, Amazon has offered a number of instructor-led classes, but today the company also announced that it has partnered with Cloud vLab, one of its APN technology partners, to provide developers with a set of self-paced online training labs. Each one of these labs costs $29.99.

The labs, Amazon says, were designed by AWS subject-matter experts and are meant to help developers ” test products, acquire new skills, and gain practical experience working with AWS technologies.” Most of the training happens in a live AWS environment and developers use the AWS console “in a variety of pre-designed scenarios and common use cases.” 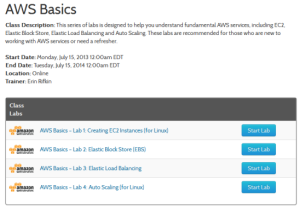 The classes cover basic skills, including how to create an EC2 instance and how to use Elastic Block Store, Load Balancing and Auto Scaling. They also cover more advanced topics, such as how to use Amazon RDS for applications and how to work with CloudFormation. In total, the service currently offers 13 different classes. You can find a full list of them here.

For Cloud vLab, this partnership with Amazon also marks the official launch of its run.qwikLAB.com marketplace for self-paced hands-on labs.

Developers who want to get started immediately get their first taste of AWS. To take one of these classes, developers have to buy a token for $29.99, and once they start the lab these tokens are then valid for a set amount of time (say two hours for a lab that should take about an hour to complete). Students have to complete the lab before their token expires, so even though Amazon says these are self-paced labs, they still only have a set amount of time to finish them (though a PDF of the instructions, too, is provided it seems). The tokens themselves will expire after six months.