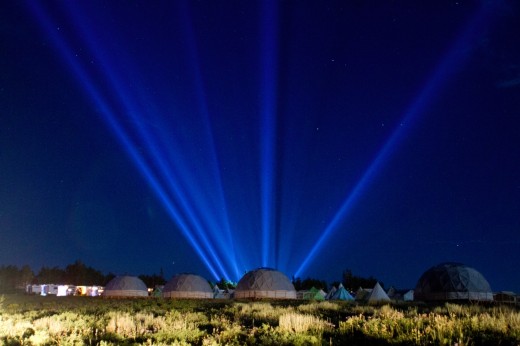 For the first time in years, I spent 72 hours without Internet or cell phone reception. While I didn’t experience any life-altering epiphanies that some claim comes from a digital detox, I now enjoy a handful of very meaningful relationships that never would have existed, with the constant temptation for shallow interactions with dozens of peoples’ avatars, thousands of miles away. I learned that when you’re stuck with people, you’re forced to find meaning in conversations that otherwise wouldn’t have seemed more entertaining than YouTube at the time.

I don’t buy the snake oil that cutting ourselves off from the net makes us better thinkers; access to the world’s information has made me more informed and creative. But, the Internet can’t give you friendship, nor can it help you discover ideas that people have never told anyone about.

Last week, I had the fortune of testing the “never detox alone” hypothesis at two back-to-back business conferences held in the mountains. The first, Summit Outside, was an invite-only Burning Man-like gathering of 800 young social entrepreneurs in the Utah Mountains. Completely cut off from the Internet, attendees slept in tents, could go horseback riding, dance to A-list DJ’s under a full moon, or attend spirituality-themed talks.

I left Summit Outside with more friends and business ideas than I have at any other conference–some from people I’d know for years, but thought I didn’t even like very much. On the flip side, CEOs and investors that normally would have avoided a tech journalist like the plague, were forced into uncomfortable conversations that unexpectedly led to great ideas.

The Internet has spoiled us; at the slightest hint of boredom or unpleasantness, we escape to the Internet. Modern life is a constant elevator pitch. Potential friends and projects that don’t enjoy a good first impression get tossed out.

Indeed, Summit Series itself has built a thriving company on top of the theory that the best business relationships start out as friendships. Since 2008, Summit Series has held a pricey annual conference of socially oriented entrepreneurs. Held on a cruise ship, at a ski resort, and in a makeshift camping mountain village, the Summit conferences intermix crazy-fun activities, such as shark tagging in the Caribbean, with A-list speakers, from the likes of Richard Branson and Bill Clinton. Now, Summit has raised $40 million to purchase a mountain and build permit home in Eden, Utah for grand pursuits.

Of course, I’m fully aware that pricey, quasi-exclusive networking conferences aren’t for everyone. There have been plenty of criticism of them over the years. I  understand the sense of irony of rich people talking about saving the world, while they party in ostentatious digs. And, of having more bark than bite when it comes to actually making an impact on the world. The conferences appeal to wide-eyed idealists.

That said, Summit Outside taught me that the world won’t come crashing down If I’m off the grid for a weekend. Like many people feeling the digital overload, I’m still planning my vacation from electronics. But, now I know I shouldn’t detox alone. I’m going to convene a camping trip–at least half from people I don’t know and never would have thought to hang out with. I’ve learned not to underestimate the power of experience and randomness.