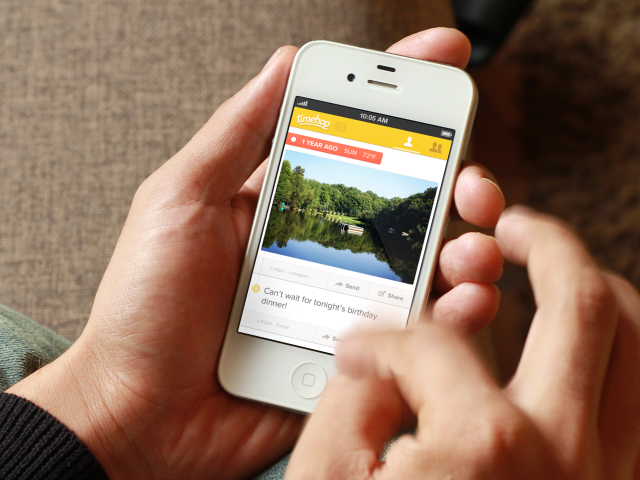 While present-focused social networks like Facebook and Instagram make plenty of room for the narcissists in us, there’s not really a dedicated and focused place to reflect on the past.

Timehop, which started out as 4SquareAnd7YearsAgo, has evolved into a mobile-first startup that surfaces old memories from your social networks. The app will pull up status updates from a year or more ago, reminding you of friends you’ve lost contact with or thoughts you had a year ago on this day.

The New York-based startup says it just rounded up another $3 million in funding led by existing investor Spark Capital. O’Reilly Alphatech Ventures, which had also previously backed the company, participated as well. Andrew Parker, a principal at Spark, joins Timehop’s board.

Timehop’s CEO Jonathan Wegener says that the company will use the round to build out the team beyond seven people and focus on mobile apps. Timehop just shut down its e-mail service last week.

“The big, long-term vision is to be a place to reminisce online,” Wegener said. “Basically in this world, all social networks are real-time. They’re about what’s happening right now, but there’s no place online to discuss the past.”

While the Series A crunch has made fundraising tough for all kinds of consumer-facing mobile and web products, Wegener said it was Timehop’s stickiness that made a compelling case. He said one-third of Timehop’s user base opens the product on any given day, which is a very respectable retention figure.

“Users who try to the product fall in love with it. This helped us make the argument that people are working Timehop into their everday lives,” Wegener said. “At first, people don’t understand why they would want this. But they get really addicted to it. They see it as a mirror of their own life, and a reflection of their past self.”

He said he’s used the app to remember which friends he’s lost touch with over the years. The app will pull up old group photos, reminding Wegener to reach out and reconnect.