Almost exactly a month ago, Microsoft launched Internet Explorer 11 as part of the Windows 8.1 preview and today, it is also launching a developer preview of IE11 for Windows 7.

Sandeep Singhal, Microsoft’s group program manager for IE, told me earlier this week that IE11 for Windows 7 will bring all of the advances of IE11 for Windows 8.1 to users of Microsoft’s older operating system. One area Microsoft has focused on with this release is speed, including a much-improved JavaScript engine and a stronger emphasis on GPU hardware acceleration for 2D and 3D content, including fonts, JPG images and WebGL-based experiences.

IE11 is Microsoft’s first browser to embrace the WebGL standard for accessing the computer’s GPU for rendering advanced 2D and 3D experiences. As Microsoft’s senior program manager for IE Frank Olivier told me, his team has worked hard to ensure that WebGL in IE (both on Windows 7 and 8.1) is as safe as possible and can’t crash the system (it does, after all, allow very low-level access to your hardware). Indeed, Olivier showed me a demo that stressed IE11’s WebGL implementation to the point where it crashes. IE11 handles this situation gracefully and simply restarts its WebGL core as needed.

To show off IE11’s WebGL features, the company teamed up with GlacierWorks, a site that aims to raise awareness about the effect of climate change in the Himalayas, to add more WebGL content to its site. 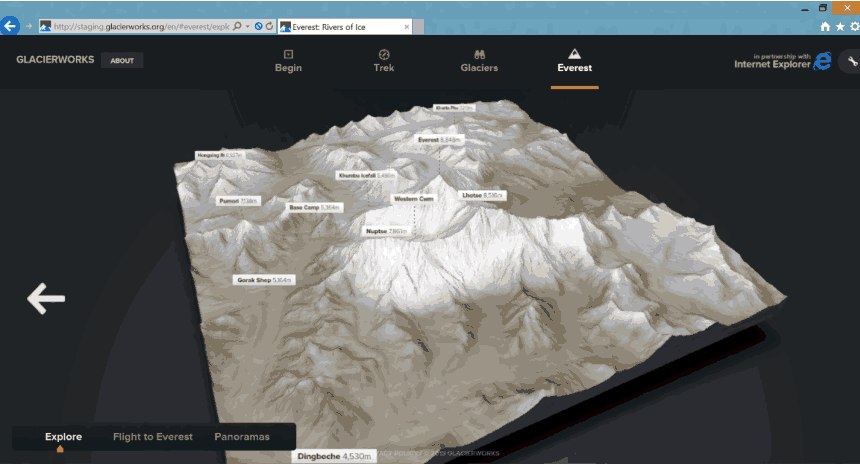 Fast, But Not SPDY On Windows 7

All of these features will also be available to Windows 7 users and Singhal expects the Windows 7 version to offer virtually the same performance as on the new operating system. One feature Microsoft doesn’t bring to Windows 7, though, is support for Google’s SPDY networking protocol.

As for Windows 8, Microsoft tells me that it will ship IE11 with the free Windows 8.1 upgrade. Microsoft clearly expects most Windows 8 users to upgrade to 8.1 and it doesn’t look like it plans to make IE11 available as a standalone download for 8.

With today’s update for Windows 7, Microsoft is also updating modern.IE, its site for tools and resources for developing for IE. The site now features virtual machines for testing IE11 on Windows 8.1 and Windows 7, as well as a new screenshot tool that lets you see how your sites look across different browsers and devices. For a limited time, Microsoft is also offering developers a 25 percent discount on Parallels for Mac so they can run these virtual machines. IE11 itself, it’s worth noting, also includes a number of updated developer tools.