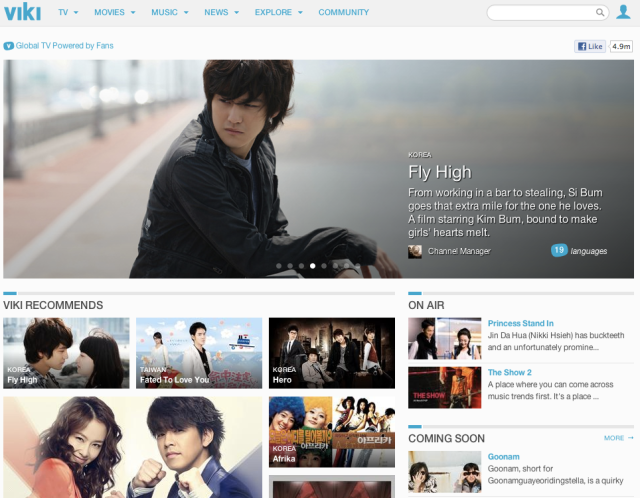 Viki, a startup based out of Singapore that is vying to be the “Hulu for the rest of the world” with a combination of premium video supplemented by crowdsourced subtitles, is today announcing two new investors that should play a useful role in achieving that.

Blake Krikorian, founder of Sling Media and now corporate VP at Microsoft overseeing XBox, and Dave Goldberg, CEO of Survey Monkey, are making a strategic investment in the company, already backed by the likes of Andreessen Horowitz and more (it was Marc Andreessen who originally made the intro to Krikorian, while another existing Viki investor, Chamath Palihapitiya of Social + Capital Partnership, was the initial connection to Goldberg), having raised $24.3 million in publicly-disclosed funding.

Razmig Hovaghimian, co-founder and CEO of Viki, says the amount of investment is not being disclosed now, although it will likely be rolled into he the company’s next round — a Series C, which will start to get raised sometime between now and 2014.

Viki has already passed 400 million words translated by its users over 163 languages, spanning content from 100 partnerships with premium brands and millions of views on its most popular programs. The company, he says, has cornered Southeast Asia and now wants to conquer other non-U.S. markets, specifically Europe and Latin America.

Hovaghimian tells me that Kirkorian and Goldberg are each bringing some much-needed firepower in a couple of key areas such as expanding into new products like XBox and music, and for much-needed, expanding networking in Silicon Valley and Hollywood, crucial as Viki approaches its next stage of growth. Viki has to date focused just on premium video delivered through PCs and mobile (where its apps have had nearly 11 million downloads, with 7 million of those in the last six months). The company to date makes all of its revenue from advertising that runs alongside its premium content. This looks like it will be the mainstay of its revenues going forward.

“There is no paid content on our platform,” he said. “We syndicate some [the deal with Netflix for example gives Viki some revenue] but our basic business model is instream ads, where we work with brands like Samsung and Coke.” He says the CPMs on these ads are healthy, “like Hulu in some regions,” with some campaigns coming in “north of $50 on CPMs” and inventory in some
regions completely selling out.

There is also a question of big data analytics. As more U.S. studios license their content to Viki, and it gets consumed on that platform, Viki is picking up a lot of data about its users and their watching behavior. It wants to come up with better ways of harnessing that and providing it in better and smarter ways for those content partners, who have been clamoring for it (this is the same kind of social media data that Twitter is tapping into with its own plays around video and online conversations). This is where Goldberg, with his expertise in analytics from Survey Monkey, will come in particularly well.