Lemon, the makers of the mobile wallet by the same name, is today releasing a new mobile payment tool whose goal is to allow the app’s users to make purchases from Lemon Network merchants without having to continually re-enter their credit card information. This is an attempt to solve a major pain point on mobile, where many retailers and other merchants have been slow to transition their websites to responsive, mobile-optimized experiences that work well on small screens or provide well-built mobile apps.

However, merchant participation in this newly announced “Lemon Network” has to be enabled through the integration of a software development kit (SDK) within a merchant’s own application, meaning the success of this product is entirely dependent on merchant adoption at this time. 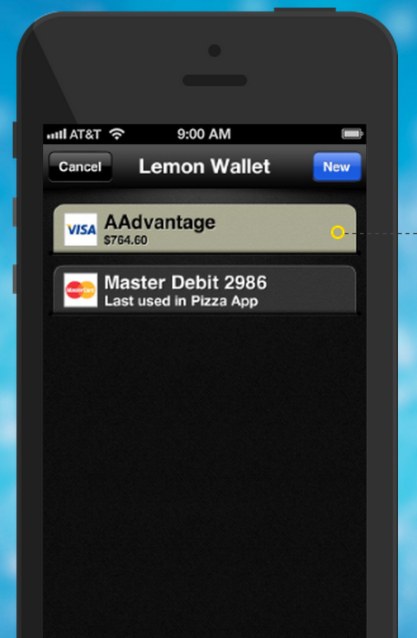 The consumer-facing Lemon Wallet, for those unfamiliar, is a tool that holds a digital copy (and photo) of everything in your actual wallet for easy access on the go, including not only payment cards, but loyalty cards, insurance cards and IDs. Consumers who need their credit-card info while shopping on their mobile can quickly copy and paste that info from the Lemon app to elsewhere. It’s also handy for when you left a given card or your wallet at home, or just don’t feel like digging through your bag for your physical wallet. Some cards are even “smart” and can provide Lemon users with balance updates and special offers.

But so far, the wallet has stopped short of providing an actual “wallet” experience in the sense of being tied directly to transactions. This is the problem Lemon’s new payments tool attacks. Now when consumers are shopping within a Lemon-powered mobile app, they can tap on the photo or name of their preferred payment card in order to complete the checkout.

The Lemon Network payment functionality is designed to compete with other mobile checkout experiences like PayPal, Google Wallet and Braintree-owned Venmo, which also just introduced a service that similarly allows users to store their credit card data in Braintree’s network for easy, one-touch payments on mobile.

But if the battle for mobile payments will include both Venmo and Lemon in terms of the competition among startups, then it’s worth noting that shots here have been fired. Lemon recently hired Jenna Wyer for its Chief Sales Officer position. She was previously part of the founding team of Braintree Payments. Wyer, employee No. 3 at Braintree, was tasked with acquiring merchants and had worked with businesses like Airbnb, LivingSocial, Hotel Tonight and Uber, to name a few. Now she has changed teams.

Lemon’s wallet is used by millions of consumers, the company says, but it declines to give specific numbers. As of a couple of months ago, CEO Wences Casares says Lemon was capturing 1,000 new cards per hour.

Additional details about the Lemon Network are here.