Microsoft shares (NASDAQ:MSFT) dropped 12.2 percent, representing the biggest single-day drop in over 13 years. On April 24, 2000, shares dropped 15.6 percent — since then, Microsoft has never experienced such a shelling. Yesterday, the company announced disappointed earnings and took a massive $900 million writedown due to unsold Surface RTs.

The stock closed at 35.44 a share yesterday. It hit 31.10 today and there is no sign of recovery in sight. For Q4, revenue came in at $19.9 billion and earnings per share were $0.59. Both were under analyst expectations. But the most surprising announcement was clearly the Surface RT writedown. That’s why multiple analysts including Raymond James and Cowen downgraded the stock this morning.

In just a day, Microsoft’s market capitalization is down $36 billion to $258 billion. The market reaction is very harsh and can be explained by the fact that shares were already trading at a high price — today is only a three-month low. On Monday, shares should certainly recover as well.

When the Surface RT was unveiled, many saw it as a potential revenue generator and as a way to finally make a dent in the tablet space. But Windows 8 and Office remain Microsoft’s two most important products. The company likes to share Office 365 and Xbox Live Gold numbers because those subscription services are on the rise. But they are tiny compared to Windows and Office.

Some investors may have suddenly stopped believing in Microsoft’s tablet dreams. That’s why the company is experiencing such a difficult day on the stock market. But the Surface RT writedown is the second writedown in a year. It could indicate that there are serious strategic issues afoot.

The company recently announced a total reorganization dubbed ‘One Microsoft’. It should make the company more efficient if it wants to release hardware products again. While the Xbox is a success, the company doesn’t have any successful tablet, phone or computer in its portfolio. The Surface RT and the Microsoft Kin are far from success stories. Everybody agrees on that today. 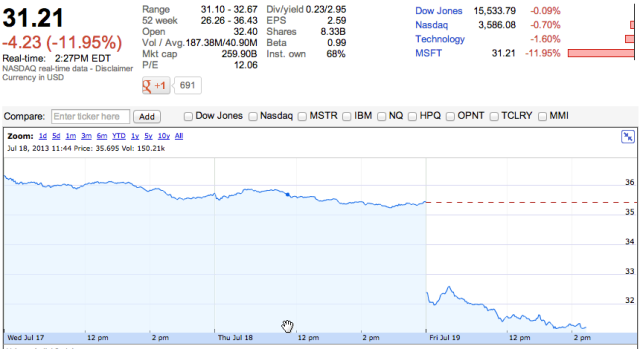