When Freestyle.VC co-founder and investor Josh Felser walked into the TechCrunch office a few weeks ago, you could tell something was on his mind. He was in the midst of sorting through a hiccup one of his portfolio startups was having with the Apple App Store. As we sat down, he excused himself for a few minutes to reach out to his contacts to figure out what could be done. I don’t usually find investors this consumed with tactical issues, particularly when it’s for seed-stage startups. But that’s what makes Felser and his partner in crime, Dave Samuel, distinct in the ever-growing sea of angel and seed investors.

Felser and Samuel are part of an elite group of co-founders who have not only started multiple companies together but have also seen successful exits for these companies. Together, the duo started Spinner (acquired by Aol for $320 million), and Grouper (acquired by Sony for $65 million). While Samuel and Felser had been making angel investments for some time, they announced a formal $27 million fund in 2011, Freestyle Capital, which makes investments in early-stage startups.

What makes Samuel and Felser so intriguing is that they are truly entrepreneurs at heart. They are open about the fact that if they had the bandwidth, they would start another company together. But with family commitments and such, digging into a startup is difficult. So the next best thing, they say, is to help other entrepreneurs, especially at the beginning stages of building a product and business.

Felser first met Samuel at a conference in 1996. At the time, Samuel, who is an MIT grad and engineer at heart, wanted to reimagine personalized radio online through Spinner. As Samuel explains, he needed to have someone on the team with more business and sales experience, and he immediately connected with Felser.

Not soon after Felser joined Samuel in 1997, their relationship was tested. An unnamed investor came between them and attempted to oust Felser from the company. As they tell the story, this investor would tell Samuel that Felser wasn’t performing, but would say the opposite to Felser himself. But as bad as the investor’s experience was in pitting Samuel and Felser against each other, they were able to move forward and keep the company’s leadership as is. Despite this hardship, this was a turning point for Samuel and Felser’s personal and professional relationships, and they emerged from the experience with an element of trust that cannot be created by hiring.

Two years later, Aol bought Spinner for several hundred million dollars. Despite the relationship Felser and Samuel had through the startup, both weren’t sure they would be business partners again. The dot-com bubble was just on the brink of bursting, and both were interested in leaving Aol once their stock was vested. It wasn’t until after they both left Aol (2001, and 2002) until they actually started seeing each other socially. After Aol, Samuel and Felser both felt like the opportunity for web-based tech startups had dried up. Samuel started a high-tech toilet seat business, and Felser wanted to buy movie theaters across the country to screen independent films.

But in between these two ventures, the duo would meet for drinks and dinner and talk about what’s next. In 2003, Felser and Samuel attended the week-long art event and community festival Burning Man (pictured below) together and began to think about their next idea. Felser noticed that there was no way for him to share the video he shot at Burning Man. This was the inspiration for Felser and Samuel’s next startup, Grouper, which was a P2P network for sharing video and other media.

The roles were similar at Grouper as at Spinner; Felser was CEO (and had more equity because it was his idea) and Samuel was president.

But the pair soon found Grouper to be a more stressful experience as founders. Both had wives and small children. YouTube was at the top of the online video space, but there were a dozen others vying for second place. Felser and Samuel said they just couldn’t figure out the soul of the company, which was a challenge they didn’t face at Spinner. 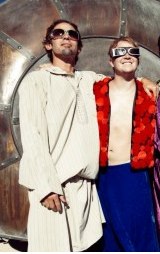 In early 2006, they started thinking that it was time to start looking into acquisition possibilities, and Sony picked up Grouper months later for $65 million.

According to Felser, one of the things that makes the duo work as founders is that they are able to be cheerleaders for each other despite the highs and lows. Part of this is having different personalities, they explain. Samuel is more analytical and even-keeled. Felser is more gregarious and emotional, and he knows sales, marketing and business development inside and out. They don’t fight often, because Samuel generally doesn’t disagree much with Felser. But Felser says that when Samuel does push back on something, he knows that his partner is probably right.

Transitioning Into An Investor

For Felser and Samuel, being entrepreneurial was now in their DNA after multiple startups under their belts. Starting a new company wasn’t necessarily as appealing to them, as they were both at a stage in their lives where they craved flexibility, especially when it came to spending time with their families.

Both thought the next best thing than being an entrepreneur is to actually help them.

But becoming a VC at a traditional firm didn’t feel right. They started doing a few angel investments together after they sold Grouper to Sony and left the company. Some of the first investments included CoTweet (sold to newly public email marketing firm ExactTarget), customer service startup Get Satisfaction, and CrowdFlower. The pair continued to invest for the next few years and formalized Freestyle in 2011 with a $27 million fund.

As I mentioned above, part of what makes Freestyle unique is that they are focused primarily on seed, and prefers to lead in these rounds (the firm leads in 80 percent of the rounds they participate in). Investments range from $500,000 to $800,000. Felser and Samuel are both open in saying that they will be the most active investor a startup will have in the beginning stages of its inception. Freestyle will sometimes follow-on in startup rounds for Series A, but won’t lead. The firm now counts 43 investments that include About.me, Byliner, Chartbeat, AdStage.io, and others.

“We imagine what it would be like if we were starting that company, and what would keep us up at night. Our operator focus starts from the minute we meet the company, and we’re really hands-on,” Felser says.

Sahil Jain, CEO and founder of Freestyle-backed advertising startup AdStage, explains “They actually take an interest in your business, and we have a call with Dave every week. They by far are our most active investor and we know they are there for you anytime.” He says that he never feels that Samuel and Felser are in this just for the money, because they take a tactical approach to actually helping him build his company.

The firm, which makes about 12 investments a year, intentionally keeps the portfolio small so they can have this laser focus on startups and founders.

Jain adds that when Felser and Samuel gave he and his co-founder Jason Wu a term sheet, the valuation of the company was lower and other investors were giving him a higher cap on the convertible note. He said that while the valuation was lower, he chose Freestyle because he knew they would be so hands on.

Ranvir Gujral, founder of the firm’s portfolio company GetChute, recalls a similar situation. “We took a discount on our valuation to work with Freestyle, but it was well worth it for their guidance and expertise,” he says. Similar to Jain, Gujral has a standing weekly meeting with Felser to discuss any outstanding issues. And he adds that Freestyle is also his most active investor.

Samuel explains that they would probably make more money if they focused on late stage, but they like doing early stage investments because it is so hands on. As entrepreneurs, this is what they both truly enjoy doing and are passionate about–building companies from the ground up. It’s not about the money, he adds.

Another unique characteristic about Freestyle is that the only way to pitch Felser and Samuel is through an introduction from someone in their network.

As written on the firm’s site:

We know you slaved for months over that ravishing pitch. Save the pomp and circumstance for the other guys, and just get in touch the old-fashioned way. Get to know someone in our network or community, and ask for an introduction. More difficult? Yup. Worth it? Absolutely.

Case in point, Gujral met the firm through an introduction from Klout CEO Joe Fernandez. Jain was introduced through the Launch conference.

Felser explains that he and Samuel couldn’t handle the dealflow coming in then they had their emails on the site, so they had to figure out a way to manage the incoming traffic and filter.

Samuel and Felser not only are part-time company builders to their portfolio, but they also serve as the business development, M&A, and finance consultants. They help their startups raise their next rounds and reach additional investors; they also are active in the acquisition process when it comes to both seeking out and managing relationships with potentially acquisitive companies. Gujral says that Felser was instrumental in helping the startup raises its Series A round, and made the introduction to Foundry Group, who led the $7 million dollar round in the startup in May.

“We strive to behave the same way we would if we were starting and running the company in a way that respects that we are not. That style permeates our whole approach, and most angels don’t come from that world,” Felser explains.

After several years of investing under Freestyle, Samuel and Felser are focusing on expansion. The firm is in the process of closing a new, larger fund. They are also planning to hire at the principal level, and will expand support staff.

In a world where startups now have the option of being picky with their seed and angel investors, VCs are working overtime to prove that they can provide value to entrepreneurs that goes beyond just cash. But Felser and Samuel went into the investment world not to make money, but to actually create value for founders. Their own entrepreneurial journey had a successful outcome, but also gave them the battle scars needed to advise from experience.

As for the App Store hiccup with his portfolio company, Felser proudly reported back to me that the issue has been resolved. Apparently another portfolio company had a workaround, and Felser cross-pollinated the knowledge. Without digging in deep as an investor (and sweating a little in one of our interviews), that knowledge would never have been shared.