Today, the website creation market is dominated by a handful of veteran players, as companies like Wix, Weebly and Squarespace now own the majority of mindshare and boast tens of millions of users between them. While many smaller players ended up in the deadpool during the market’s land grab, one veteran startup has managed to survive — and bootstrap its way to profitability.

Today, five-year-old website builder SnapPages is rolling out a major redesign and upgrade that aims to lure aspiring site builders away from the bigs by offering a service that purports to be accessible to everyone — whether a novice or a wily professional.

Broadly speaking, today’s website creators tend to cater to one side or the other, SnapPages CEO Steve Testone explains. There are a number of services out there that claim to give you the tools to get a website up and running in a hot, New York minute, even if you’re a card-carrying Luddite. Given the target audience, this requires removing as many barriers to entry as possible and, as a result, they tend to prioritize ease-of-use and simplicity.

For the non-technical this is great, but what if you’re looking for a little more support and a little more horsepower? Generally, the focus on ease and simplicity comes at the sacrifice of power and flexibility — and vice versa.

Thus, in building its new platform, SnapPages’ priority, the founder says, was to try to strike a balance. To do this, the team attempted to create what Testone calls an “app-centric platform” — in other words, the platform is designed to break its interface (and to a similar degree, the user experience) down into smaller chunks (apps) that are easier to work with and can be used as needed, removing some of the friction from the equation for novice users.

Prior to the redesign, SnapPages was also at a place where, if it actually hoped to survive for another five years in an increasingly crowded space, the platform was in sore need of a new coat of paint and some updated tech. As a result, the team has completely re-designed and re-programmed platform from the ground up. For starters, that means that SnapPages is now finally HTML5-optimized. Whereas the platform’s apps were originally written in Flash and its websites were in HTML, the CEO tells us, at launch, the entire package is HTML5 and optimized for touchscreens.

The startup has also made its new “Themes” much more customizable, giving users the ability to resize elements, increase margins and customize colors and have those changes auto-updated throughout the theme (on multiple pages) without touching any code. Furthermore, because its old themes had gotten pretty stale, SnapPages has created a new library of themes users can choose from — and the same goes for typography. On top of that, the new platform offers color linking, color menus, the ability to customize your site’s navbar and add custom social icons and footer menus, to name a few. 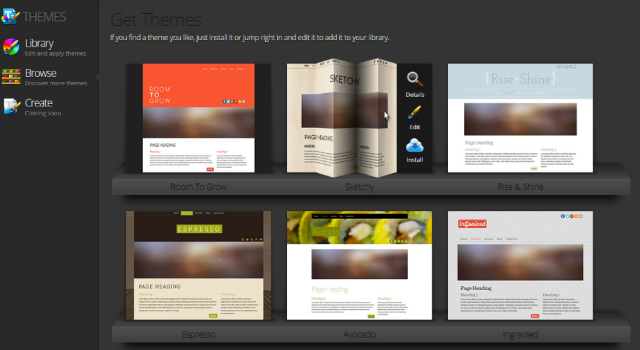 Rattling off a list of features is lame, to be sure, and if you’re just looking for the basics, features like “advanced typography” won’t have much appeal. But SnapPages’ comparative strength seems to be this: Making it easy to create a website without all the bells and whistles and, if you’re more design and detail-oriented, providing additional layers of customization to do just that. (While presenting it through a UI that’s reminiscent of PhotoShop and thus feels familiar.)

Furthermore, customizations like tweaking the positioning, width and look of your navbar generally require some familiarity with CSS or other programs/languages. For novices, that’s daunting, but the tech-savvy expect more options and control over customization. It’s a tough line to walk, because it’s so easy to go too far in one direction. But, by using a drag-and-drop interface for template changes and an improved WYSIWYG for more transparent previewing, SnapPages is trying to walk the line.

Some readers will say, “but what about WordPress?” While WordPress is one of the more powerful site creation platforms out there and customizable, yes, at its core, it’s a CMS. This comes with its own set of upsides and downsides. WordPress can scale up (and offer customization, support, hosting, etc.) from the solo, casual blogger, all the way up to professional publishers (where I happen to be writing this from).

Even if that means giving up some of the publishing potential and features, SnapPages is going in a different direction. Though it supports publishing features and has a newsletter creation tool and so on, it doesn’t cater to publishers in the same way WordPress does. So, if you’re a blogger, SnapPages may not be for you.

Instead, it’s going for the general approach (hence the comparison to Wix and Weebly) and, while it supports a range of features, it’s not for the enterprise use case. Simply put, the goal, the CEO says, is to give users a basic toolbox of apps to build their websites, with an app to manage content, another to manage themes, one for your files, one for photos — and so on. Users can make changes to all of them at once or one at a time, publishing changes to their site in real time.

SnapPages 2.0 also brings the promise of improved infrastructure, as it now includes cloud hosting and a CDN infrastructure for user websites. Meaning: SnapPages has moved to the cloud with the goal of adding speed and scalability to customer websites, because no one likes slow, gummy rendering, people. No one. 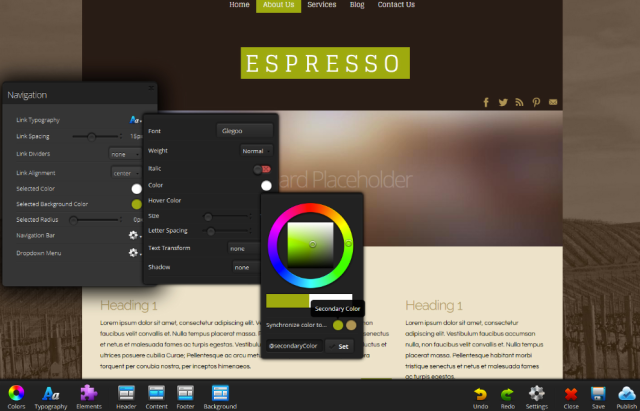 If not because it’s well-designed, fits most use cases and is pretty easy to use, then you might at least become a fan of SnapPages story: In an era where every other startup seems to have $10 million in the bank, the startup is somewhat unusual. It doesn’t hail from Silicon Valley, hasn’t raised any outside capital and has remained afloat without spending anything on advertising.

Since launching at TC50 in 2008 it’s had no more than three full-time employees at any given time, and for much of that time, Testone was flying solo. Furthermore, its growth has been measured rather than explosive, and it doesn’t really have any vanity metrics.

The Austin, Texas-based startup has managed to bootstrap its way to profitability, but that didn’t happen quickly. Instead, it’s grown slowly via word-of-mouth and by allowing professional designers using its platform to contribute to the development of its apps and themes.

It also listens to what customers want. When SnapPages first launched, it strove to limit the amount of customization options available to users. However, its new platform is singing a slightly different tune, instead ratcheting up customization options — alongside the addition of key functionality like optimizing site rendering and layout for mobile — while keeping things simple.

Going forward, it would be great to see SnapPages open its doors to third parties and allow developers to build apps on its platform and pushing flexibility one step further. But for now, if users buy into SnapPages’ purported balance of simplicity and ease-of-use, the new platform could show itself to be a worthy alternative to the Wixes and Weeblys of the world. Or not. Depends whether you’re into the whole David vs. Goliath analogy thing. 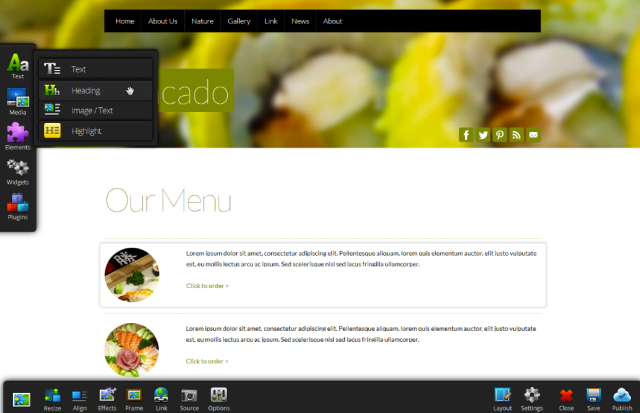