Every year for the last 11 years, Microsoft has organized Imagine Cup, one of the world’s largest technology competitions for students. This year, more than 25,000 students participated in the preliminary rounds in their respective countries, and the worldwide finals are happening in St. Petersburg, Russia, this week. The event, which takes the form of a Disrupt-like pitch competition, officially kicked off today and will cap off with an awards ceremony hosted by Dr. Who’s Matt Smith on Thursday, where a total of $1 million dollars and prizes will be up for grabs by the winners.

For this year’s event, Microsoft has made a number of changes compared to previous iterations. In other years, the focus was always heavily on services that focused on education, healthcare and social issues. This year, the competition still features a “world citizenship” category, but it’s only one of three main competitions, the others being games and innovation.

As Microsoft tells me, the company realized that many of the most innovative and popular applications and services that have recently made a difference in education, health care and environmental awareness — including, for example, Twitter — weren’t created to focus on solving the world’s problems, yet they still created platforms that led to social change. Because of this, this year’s event features a wider range of applications, as well as a stronger emphasis on the business aspects of these student projects to encourage them to actually turn their ideas into viable startups. 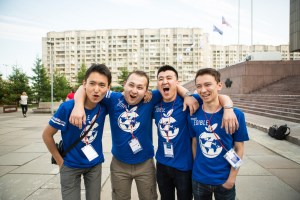 This year, there is also no elimination round during the finals. All of the teams will present their projects today (you can watch them live here) and then face the judges again at their conference booths tomorrow for one-on-one Q&As.

Microsoft invited 309 students from 87 teams and 71 countries to Russia. The first-place winners in the three top categories will win $50,000, but there are also numerous other awards, including, for example,  apps that use Azure, Windows 8 and Windows Phone (this is, after all, a Microsoft competition). There are also a number of awards from sponsors and a $12,000 Women’s Empowerment Award sponsored by Microsoft and UN Women for apps that “help empower women to improve their lives, their rights and their futures.”

I’ll be in Russia for the rest of the week to cover the event and will highlight some of the most interesting projects over the next few days. Last year, we saw cool projects like a glove that could translate sign language into spoken words, and I expect we’ll see even more cool projects this time around.