Azumio, the maker of health apps, such as Fitness Buddy and Instant Heart Rate, has another one up its sleeve. The Palo Alto-based startup, which is backed by Founders Fund, Accel and Felicis, is out with a comprehensive activity and food-tracking app called Argus.

Argus follows how much you move, walk, run or cycle through the accelerometer; it does not rely on signals from cell towers like other competing apps which might drain the battery more. It also helps you log what you eat, how you sleep, how much water and coffee you drink and how much you exercise. The idea is that it’s a catch-all, life-logging app where people can store all of their activity, eating and sleeping habits in one place without having to switch from app to app. It was a common request from Azumio’s user base, the company’s CEO Bojan Bostjancic says.

The app has a beautiful honeycomb design with individual cells showing behaviors like cups of water or coffee consumed per day. You can scroll through it like a visual diary of your past habits. If you hold down a cell for two seconds, the app will aggregate your activity data. If you press down on a walking cell, it shows how many steps you’ve taken in the day hour-by-hour and how long you’ve been active. 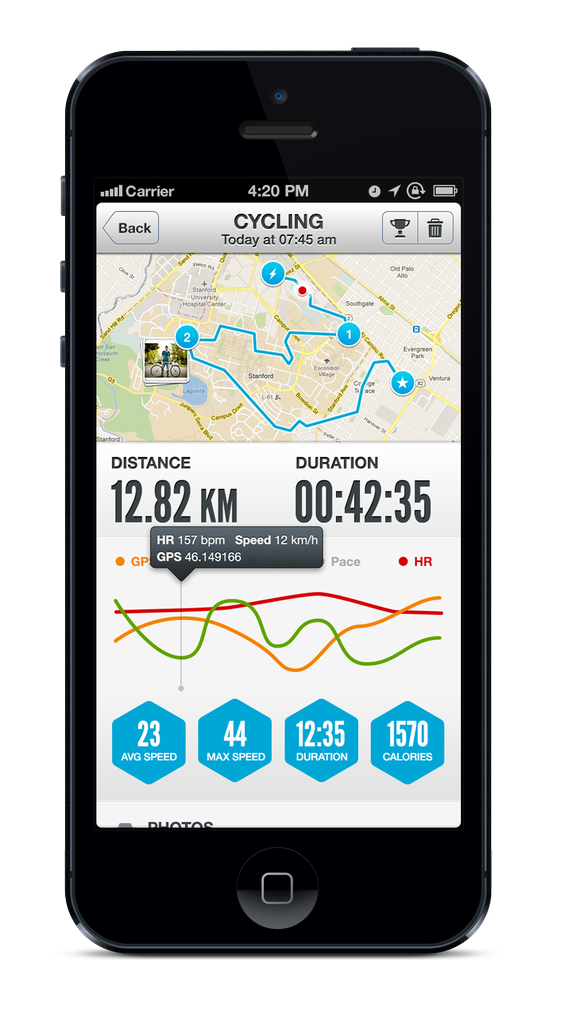 For other types of activity tracking, users have to proactively do things like take pictures of their food or log a workout or yoga session. If you take a picture of food, Argus will ask you to categorize it into one of six categories including grains, fruits and veggies.

The other cool part is that the app also syncs with other activity-tracking devices. It’s a platform that can pull in data from some New Balance devices and the Salutron Lifetrak automatically without the need for switching from app to app to see different data. It also works with the Withings’ weight scale and MapMyFitness, with more devices on the way. Argus also gives users personalized goals and reminders if they fall off track with their workout regimens.

The company says the beauty of having all of this data in a single app is that it makes it easier to track different correlations. Does working out regularly affect your standing heart rate? How much does changing your diet affect your weight?

There are also basic social features for sharing photos of what you eat with friends inside the Argus network or on Facebook.

The startup itself has been around for two years, and has been an early pioneer in building mobile health apps for smartphones. Their earlier heart rate app would measure a person’s pulse by using a phone’s camera to detect faint changes in color in their fingers.

Through a suite of apps, they’ve racked up about 40 million different users with 2 million weekly actives. Some are paid, but ultimately Azumio plans to switch to more of a subscription-based model. The revenue they make now is enough to cover their costs, but the hope is that freemium could bring them a larger revenue base. Other companies in the mobile health space like Fitstar, which partners with athletic celebrities to make interactive workouts, also use a subscription model where people pay per month for extra workouts or features.

Argus is competing with other apps like Moves, which is another activity tracker. That one doesn’t do food, sleep or coffee intake, but it does follow where a person goes and guesses whether they are walking, cycling or in a car.