It’s said that investors are wont to follow. Once a startup has persuaded the first angel or VC to invest, it’s significantly easier to get others to join the round. A similar mentality at scale can be seen in crowdfunding. Campaigns that garner enough backers early on reach a tipping point that often sees the project funded well before its deadline. Meanwhile, those that fail to attract enough initial backers are usually destined to be consigned to the crowdfunding graveyard.

In a blog post published today, Seedrs, the UK site that makes it easy to invest in early-stage startups, sheds some light on what it takes to reach the required tipping point to get funded through its equity-based crowdfunding platform. The key takeaway is that startups who are able to mobilise what Seedrs is calling “network” investors — people who have learned about the startup not through the platform but via friends, family members or someone else in their external network — have a far better chance of being funded.

… if there is one secret to success on Seedrs (or on any crowdfunding platform, be it equity-based or rewards-based), it is this: independent investors will only invest meaningfully if they see that the deal has momentum; and the only way to create momentum is to get network investors to invest the first chunk of capital.

Specifically, it pegs the tipping point of any campaign at 30-35% funded, after which, based on historical data since Seedrs launched 11 months ago, a startup will almost certainly go on to raise its target funding. “If you want to stand a strong chance of successfully raising capital through Seedrs, you will need to mobilise your networks to invest about 30% of the capital you are seeking,” notes the post. It’s only after this point that “independent” investors, the majority of Seedr users who use the platform to discover startups that might be worth investing in, will likely follow in sufficient numbers to see a startup funded.

The data also shows a case of diminishing returns. To date, every startup that has hit 35% funded on Seedrs has gone on to get the full 100% of its target funding. Reach 30% funded and this drops to 90%. Meanwhile, achieving 20% funded brings the odds of meeting the full target to around 80%, all the way down to 5% equating to roughly a 50-50 chance of being funded. 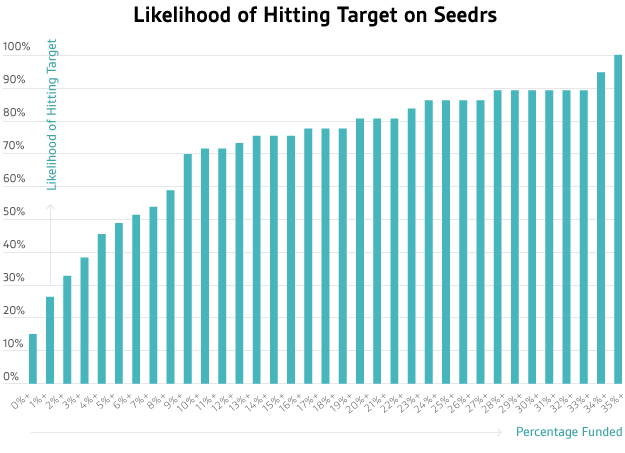 Overall, Seedrs says that of the 200+ startups that have seen their listing go live on the platform, slightly fewer than 15% have hit their targets. “In other words, starting from 0% funded, you have about a 15% chance of making it,” writes the company.

Thus, the way to increase those odds is to mobilise friends and family and others in a startup’s external network to take the lead in investing so that independent investors registered on Seedrs will follow. Considering it’s often argued that crowdfunding replaces the friends and family round, that’s somewhat ironic. However, the psychology behind this pattern of behaviour isn’t really anything new.

Seedrs says it’s partly because independent investors want to see that a startup’s founders are willing to do the hard graft of bringing in investment though their own networks, and can sell their vision. “The other reason is that that’s how human behaviour works,” writes the blog post, noting that people like to be part of something that’s “hot”, along with a more rational reliance on the so-called wisdom of the crowds, especially when that crowd has put its money where its mouth is.

“What this data shows—and it’s corroborated by loads of anecdotal evidence we’ve received—is that equity crowdfunding works best when the entrepreneur works hard to market the campaign and drive investors from his or her extended networks”, Seedrs CEO Jeff Lynn tells TechCrunch. “Independent investors don’t want to invest in a deal that’s 2% funded, and why should they? If the entrepreneur doesn’t have the skill and hustle to get friends, family, community members and others to put in a little bit of capital (and with a £10 minimum, it can be a very little bit), what chance is there that the entrepreneur will be successful when it comes to generating sales, driving traffic or hiring talent? Meanwhile, once our investor base sees that a deal is moving and getting interest, they have very deep pockets and are willing to reach into them.”

To that end, Seedrs has seen 26 funding campaigns succeed since it launched just under a year ago. £1,360,526 has been invested through the platform in total, with the average amount raised being £52,328 for an average of 14.5% equity from an average of 76 investors.