Oh, my. I think someone has actually done it.

Someone has built a system that promises to help me find fun things to do near me that… actually makes me want to do fun things near me.

Like many a concept before it, Preamp.fm is so simple, yet so clever, that it drives me crazy that I didn’t think of it first. Preamp.fm finds a bunch of artists playing shows in venues near you, then builds an old-school MTV-esque video playlist with one video for each band in hopes that you’ll like one enough to go see the show.

Simple, right? But it works so well.

Maybe I’m lame. Maybe I’m just not very good at this whole concert-going thing. Whatever the case, I tend to not go see shows unless I hear that a band I already love is coming to town. Of the half dozen-or-so concerts I go to each year, almost all of them are bands I’ve already been listening to for the better part of a decade. Most of them are bands I’ve seen a bunch of times already. If variety is the spice of life, my concert hopping life is… pretty friggin’ bland. 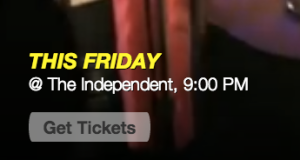 In the first thirty minutes or so of playing with Preamp.fm, I’ve already found 3 new bands I want to go see.

Here’s how Preamp.fm works: You pick your city, and it starts playing videos from bands playing soon. That’s it. You can skip to the next band, bring up a big list of all the shows they’ve found happening over the next two weeks, or just sit back and let’em roll. In the bottom left of each video is a “Get Tickets” button that pushes you to the venue’s purchasing system.

And therein lies their business model: they’ll collect a commission on tickets, whenever a venue allows it. If they can get you to buy a ticket, they might make a few bucks off the sale. Meanwhile, all of the videos — the heaviest part of the site, traffic wise — are being piped in from Youtube, so Preamp.fm’s hosting costs are presumably pretty dang low. The users finds new bands, the bands get more fans and exposure, the venues make more sales, and Preamp makes money for bringing them all together. Everyone wins! Hurray!

Alas, Preamp.fm isn’t a nationwide thing yet. In fact, it only works in four major cities right now: Los Angeles, New York City, Washington D.C., and San Francisco. Every city has different venues, and every venue shares their upcoming shows differently, so building its coverage out quickly might prove to be something of a challenge. Preamp.fm is hoping to find a “global crew of local music experts” to help them curate things.

Is it perfect? Nah — of course not — but remember, it just launched, built by a small, bootstrapped team. It’s not going to have every venue right off the bat, even in the cities that it supports. It also doesn’t seem to tell you when a show is already sold out — something which might get a bit annoying, if you’re consistently finding bands you like only to be unable to get tickets. But this concept is excellent, and the execution so far is quite solid; if they can figure out how to scale it up, I see myself using it regularly.

Preamp.fm was built by Charles Worthington, a freelance developer/product designer out of Washington, DC. You can check out Preamp.fm here.