In some ways the Qwerty-packing Q5, with its throwback BlackBerry looks, is a far more important device for BlackBerry than its current flagship, the all-touch Z10. Or the premium-priced Qwerty-clad Q10. The mid-tier Q5 should be priced to shift — because that’s what BlackBerry needs to happen to start regaining the ground it lost when it was forced to pause and reboot its OS to play catch-up with rivals. That’s what the Q5 should do, but will it?

The problem for BlackBerry is it may already be too late to turn things around. BlackBerry’s latest results, out late last week, made grim reading as the company missed analyst expectations, and its share price took a battering. It shipped just 2.7 million BlackBerry 10 handsets in its Q1. But it has only had two BB10 devices to sell, one of which (the Q10) only made it to market in the U.S. earlier this month. Which makes the Q5 even more important: BlackBerry needs more handsets in its portfolio attacking different price points to have a chance of ramping up sales. 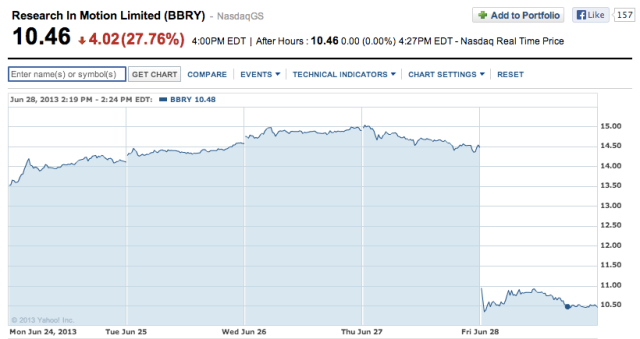 The problem is the Q5 doesn’t feel like a saviour. It feels closer to a kludge. Likely it isn’t going to be cheap enough to really hit Android where it hurts (it’s mid-tier, not budget after all). Nor does it feel like enough of a leap forward to convert a new generation of users to BlackBerry. BB10 is still Blackberry playing catch-up with competitors, rather than streaking ahead in the innovation stakes.

Of course many Blackberry loyalists and long-time users aren’t going to be unhappy with the Q5’s old school Qwerty form factor. But that staid staple means it necessarily offers a crimped OS experience versus the full-touch Z10. On the Q5 — as with the Q10 — the touchscreen has had to be squashed into a square to accommodate yesteryear’s physical Qwerty keys. Which is a problem because BlackBerry’s new platform needs room for the user to manoeuvre.

BB10 is built around gestures and layering content — and that whole “peek and flow” dynamic comes into its own on a full touchscreen. But on the Q5’s small square it’s inevitably constrained. Yet, despite this squeezed screen, the Q5 is surprisingly big for a Qwerty BlackBerry. Certainly compared to past generations of RIM hardware — those ever-so-popular Curves and Bolds it apparently succeeds. 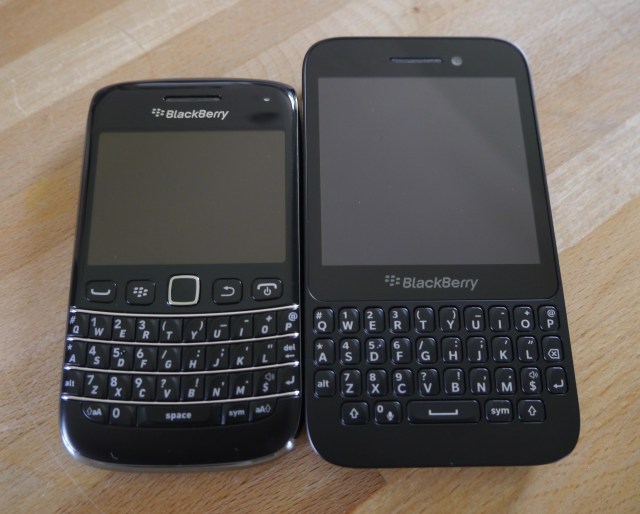 As well as being constrained by having to make room for the keyboard, space has to be found to accommodate the bevels where BB10’s gestures have to start. This makes the overall front footprint a bit, well, hefty. It looks like an oversized, top-heavy BlackBerry, which will feel like a step backwards to those accustomed to BlackBerry’s traditionally highly pocketable handsets. And who else is this Qwerty-packer really trying to woo?

Android users have so much choice when it comes to keyboard software that even if they don’t get on with the stock Android virtual keyboard they can switch to Swype, or Swiftkey or any one of the growing number of Qwerty alternatives cooking up interesting new ways to type. The Q5’s immutable plastic keys feel terribly dumb phone in comparison.

Even the BlackBerry exec demoing the Q5 at the press event I attended to pick up a review device described the physical keyboard as “infamous”  (Freudian slip?). And said he found typing on it “a bit strange” because “I’m used to typing on the [full touchscreen] Z10.” That says it all really. 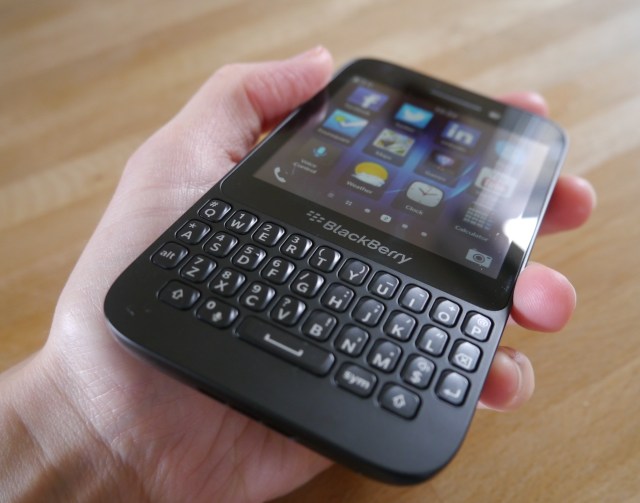 The Q5 is a deeply conservative device. It continues to look backwards to BlackBerry’s legacy keyboard-chained past — a compromise between old technology and new software. And like most compromises, it’s unlikely to entirely please anybody. It’s not that it’s terrible, it just doesn’t feel good enough to make an impact — and that means it’s not good enough because BlackBerry needs something remarkable to stand out in this crowded mid-tier segment.

Yet you can see exactly how and why BlackBerry has arrived here. In its current shrunken state, as its user base and revenues have diminished, the company has had to retrench. It can’t afford to lose any more users, yet it can’t afford to ramp up the number of devices in its portfolio quickly enough — making it super important that it retains its one remaining heartland: corporate users. Those are the last really sticky BlackBerry users, even as fickle consumers have wandered off elsewhere.

So BlackBerry can’t cut its ties with the past as it’s now even more dependent on its most conservative demographic. Its focus has to be on servicing that existing corporate user-base — because their loyalty is locked up far more than the average consumer. Some 90 percent of the Fortune 500 are BlackBerry customers, according to the company. And some 60 percent are apparently trialling BB10. BlackBerry needs those bulk-buyers to migrate to BB10 and continue pumping money into its coffers. If they abandon ship BlackBerry really will be an adrift ghost ship.

Selling mobile email to corporates is how BlackBerry built its original mobile empire. And selling to corporates is where BlackBerry has had to retrench to now. An army of cheap Androids is sweeping away its other former stronghold: teens. While free, over-the-top messaging apps like WhatsApp have eroded the appeal of BBM (BlackBerry’s licensing of BBM to Android and iOS this summer also feels like too little, too late). Now, with the mid-tier-priced Q5, BlackBerry is apparently hoping to woo those kids back. But the Q5 compromises on target demographic, too.

On the one hand BlackBerry says it’s aiming the Q5 at younger users. But it also cites SMEs and corporates as targets — flagging up the Balance feature that allows segmentation of work and personal content on the device. Little wonder then that, design-wise, the Q5 looks like it’s trying not to be too much of anything, so no one feels like disowning it. If I had to use one word to describe it, it would be generic. Or plasticky. It’s as if it’s been deliberately left as blank as possible to be as inoffensive as possible — to try to appeal to as wide a group as possible. In other words: another compromise. 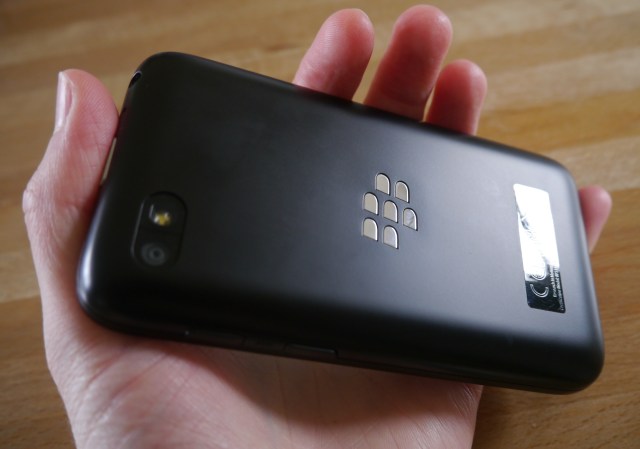 The other problem BlackBerry has is that corporates are famously conservative about technology upgrades, which explains why it has no plans to sunset BB 7 any time soon. Corporate investments in BES 7 “have to be protected,” as one BlackBerry spokesman put it. Which means the company has to keep supporting BB 7 and producing devices running that last-gen OS for the foreseeable future. Which stymies change, and hampers BB10’s progress as a portion of resources have to go on the old platform.

Plus, if BB 7 devices are still on offer, why should corporates risk the upheaval of upgrading to a device like the Q5? They’ll stick with what they know, and leave this compromise on the shelf. So while BlackBerry youth users are going — or have already gone — elsewhere to check out shinier hardware, its business users are foot-dragging and in no hurry to move on. Talk about being stuck between a rock and a hard place. No wonder turning this tanker is so hard.

Pricing will of course play a key role in whether the Q5 sits on shelves or not. The mid-tier is where the largest Android army roams. But carrier tariffs for the Q5 are going to need to be a lot lower than the early EE pricing of £26 a month to be competitive enough to win over consumers. That price is pitting the Q5 against iPhone 4S or Galaxy S3 tariff prices. Which makes BlackBerry’s mid-tier offering a tough sell, whichever tech camp you prefer to sit in.

Regardless of whether this middling handset ends up selling well or not, it may make little material difference to BlackBerry’s prospects. The perception that the mobile maker is now locked in a death spiral will only increase shareholder pressure on the management team, and make acquisition a more likely end. BlackBerry would need to sell an awful lot of Q5s to calm that spin.