Imgur, the simple but popular photo-sharing site that’s a favorite among Reddit’s user base, is today “officially” launching its first mobile application. And Imgur, due to its unconventional ways, has gone Android-first. (Many of its users’ images fail to pass through Apple’s strict guidelines on content and copyright.) Of course, the most devoted Imgurians have already installed the new mobile app in its earlier beta format, which was tested in the wild. This is also why the Google Play Store sports a fair number of poor reviews – users had been reporting bugs and other issues with beta builds, and marking the app accordingly.

Today, the official app already has dozens of competitors whose third-party creations have been built on top of the Imgur API. In fact, when searching for “imgur” from your Android, you’ll now find the top result is the 4-star rated “Imgur for Android,” which had established its position as a preferred way to browse and upload to Imgur’s public gallery or any subreddit (Reddit’s sub-sites devoted to specific topics.)

Many users will be happy with these alternative apps, and will see no reason to change just because this new app is the “official” version. But that may change in time, as the company adds more functionality to its flagship mobile product. 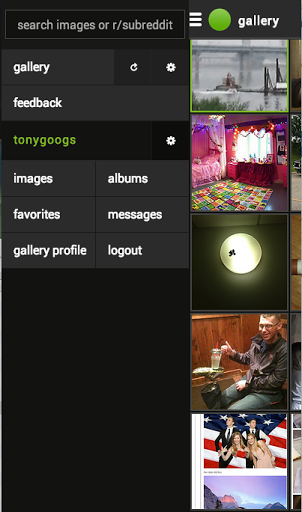 Like many of the unofficial client apps, Imgur’s new app allows users to view and upload photos, and it also supports sharing, commenting and engaging with the broader Imgur community. The company is also teasing upcoming features due to arrive in “coming months,” which will help with content creation, as well as personalization. That earlier part could be intriguing – if Imgur moved from being only an image-hosting site to one which involved itself a bit more in the process of image (and meme) creation, it could further define its niche in the crowded photo-sharing market as something more than an online archive.

The company has long since wanted to become a destination site for viral images and image-based memes, similar to how YouTube become the go-to destination for videos. We’ve previously speculated that this means Imgur will have to at some point develop its own meme or animated GIF generators, in order to help feed more content onto its servers.

In advance of the mobile app’s release, Imgur overhauled its API at the end of last year, to add support for functionality introduced in a site upgrade, including image uploads to accounts and the user submitted Gallery, account management, album management, voting commenting and replies. At the time, the company said it has issued over 10,000 API keys, for both desktop and mobile applications. By allowing its own developer fan base to compete with its official products, the company is on the one hand making its service more accessible to its user base, but it has also, to some extent, lost control of the experience it wants to offer its users.

According to Imgur CEO Alan Schaaf, the company decided to build for mobile after seeing a dramatic increase in mobile visits – up from 7 percent in January 2011 to around 30 percent at the beginning of 2013.

The Imgur Android app is available here. The company is still working to get an iOS version approved.