Timehop, the startup dedicated to helping you remember your past in an ever more fast-paced world, is taking its first major step beyond collecting content solely from social media services. The company is now debuting Timehop Sync, a desktop client for Mac and Windows which uploads your photo library, and the memories contained within, to the Timehop service. 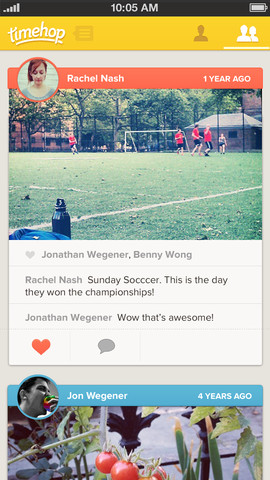 Originally a hackathon project that would email you Foursquare checkins from a year ago, the startup has gone through a number of transitions before becoming the product it is today. In early 2012, it rebranded itself from 4SquareAnd7YearsAgo to  Timehop, and began emailing users Facebook status updates, photos they were tagged in, plus Twitter and Instagram posts. Later, after unsuccessfully trying to get email subscribers to transition to the web, co-founder and CEO Jonathan Wegener says the team realized mobile would be a better direction, given that half of Timehop’s emails were already being opened on iPhones.

Though the company declines to provide its user numbers, Wegener did tell us that the iPhone app’s debut was “huge” for Timehop, and the number of shares per user have since increased by 20 times.

“That was really surprising to us – how much of a publishing mindset people have when they’re on the mobile app, versus being in a consumption mode when they were reading their Timehop daily email,” he says.

With Timehop Sync, the plan is to give those users more to share.

“Personally, I have about 13 years of digital photo history, and of my 30,000 photos,  maybe 300 made it to Facebook, Instagram and the other social networks. The vast majority of my photo archive is still offline,” explains Wegener.

“When you take a photo, you’re taking it to look at later. And right now, you rarely go look at your old photos – because it’s overwhelming, because there’s no context, because opening iPhoto and looking at 30,000 photos is going to be an entire day. The big irony is that you take all these photos without ever looking back at them,” he adds.

And since Timehop’s overarching goal is to inspire people to rediscover their past through its “this day in history” bite-sized chunks, the service needed to be able to tap into these private collections. 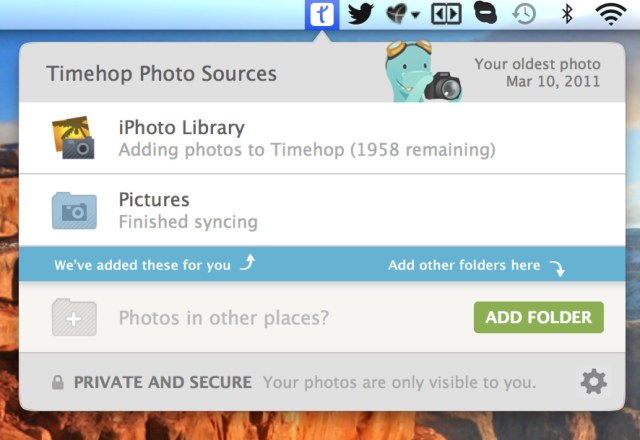 Using the desktop client itself is simple. You just download the app, install it, and it then automatically starts to sync your photos back to Timehop. By default, the app will upload users’ Pictures folders on Mac and Windows, as well as those stored in iPhoto on Mac. An option to add other folders is also available.

While you can’t granularly pick and choose which photos are uploaded, when they’re shared back with you, they remain private, unless you specifically choose to share them more broadly with your network of friends. Timehop has also implemented some basic logic for handling these larger photo collections, including a means to suppress duplicates and skip over non-meaningful files like screenshots, as well as a way to cluster photos into albums where photos have been taken together at the same time.

Going forward, Timehop will continue to focus on its iPhone app experience, while the email newsletter will remain up-and-running for Android and other non-iPhone users. Wegener says the company is just experimenting too quickly to be able to manage two different platforms (iPhone and Android) right now.

The new Timehop Sync client is available for download here.