There is an ongoing land grab for taxi drivers in Malaysia, with taxi app startups aggressively targeting the handful of taxi drivers keen to jump on a digital platform.

Two year-old taxi booking startup, MyTeksi has been busy recruiting cab drivers over to its service. When I visited its offices two weeks ago, Aaron Gill, MyTeksi’s product and marketing head, said the company ramped up its efforts over the past six months to convince drivers to get smartphones and data plans.

It’s had to sell the benefits of getting hooked up to a service that allows drivers to receive jobs, rather than have to drive around looking for passengers by the side of the road.

So far, MyTeksi has recruited about 2,500 drivers covering the capital city of Kuala Lumpur, as well as Putrajaya, Selangor and Negeri Sembilan. The platform receives one booking every eight seconds, or 10,000 per day, which nets the company about $3,100 (10,000 MYR) daily.

But things really started heating up in the past month, when Rocket Internet debuted its Easytaxi service in the country.

Since Easytaxi’s launch, there have been rumors of its staff approaching cabs with MyTeksi decals and getting them to hop over to Easytaxi instead. Sources close to the companies said that Easytaxi’s staff have also helped delete the MyTeksi app from drivers’ handsets, instead replacing them with Easytaxi’s app.

Joon Chan, managing director at Rocket Internet did little to deny the rumors. “Drivers are free to use any app they want on their phones. It’s only fair since they pay for their own phones and data plans,” he said.

He added that only about 10 to 15 percent of the drivers in the country have smartphones, indicating that the addressable pool of drivers is even smaller. 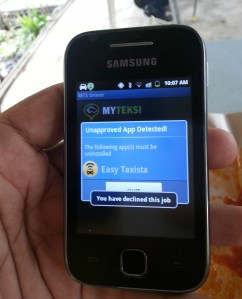 But MyTeksi may be deploying its own anti-competitive tactics. Chan produced a photo of the MyTeksi app apparently prompting the driver to remove the Easytaxi app.

Chan said Easytaxi started driver acquisition on the 12th of May, and has been putting up kiosks at gas stations to recruit drivers. The startup is expanding quickly—in the past month, it’s added five new employees each week, he said.

Gill of MyTeksi, commenting on Rocket’s entrance in its space, said: “They’ve made us better and sharper. We are growing our fleet at a faster pace now, enhancing our service levels and will continue to work hard to maintain our edge.

“We must be doing something right if a well-funded and experienced organization such as Rocket Internet finds this space worth their time and investment.”

MyTeksi is in the midst of raising its Series A, and has just expanded to Manila. Under Rocket Internet, the Easytaxi service is in 10 different countries now.

The App Gap For Booking Taxis
The opportunity for taxi apps in Malaysia has been created by the less-than-stellar reputation of taxi drivers there.

An old 2008 survey by The Expat ranked Malaysia’s taxis the worst in the world. And other accounts of errant behavior continue to pop up in the media, suggesting this hasn’t changed since.

When I was there two weeks ago, most of the taxis I flagged insisted on charging a flat (and significantly higher) fee, refusing to use the official meter for the ride. Some of the locals said being cheated or even robbed by cab drivers was still an issue in the country.

Gill said taxi apps have been helping to regulate drivers by registering them to the service, and allowing them to be tracked as they travel.

Another factor contributing to the opportunity is the lack of competition with any large taxi company in Malaysia. In Singapore, for example, the main cab operator, ComfortDelGro, produces an app for its fleet which covers more than 50 percent of the local market. The majority of cabs in Malaysia, however, still rely on radio transmission for job calls. The only cab operator that has produced an app appears to be Sunlight Taxi, but it only has about 10 percent market share. Its app was released this year.