Ebay is generally credited with being the first company to bring auctions — a system that, for nearly 2,500 years, had exclusively taken place live in noisy, public (and offline) forums — into the Digital Era. But, today, in spite of the fact that eCommerce has become a thriving global industry, with online marketplaces collectively topping $1 trillion in sales last year, one market in particular has managed to resist the disruptive influence of technology and online commerce: The grand old world of fine art.

Not to be deterred, a handful of startups have emerged in recent years behind a shared goal of leveraging eBay’s online auction model to bring some automation and democratization to the staunchly brick-and-mortar industry. The efforts of three young companies in particular, the New York-based Paddle8, Berlin’s Auctionata and India’s Saffronart have begun to find some support, both from insiders and investors.

To wit: Last week, a number of well-known names in the fashion and art worlds put their through their support behind Paddle8, an online auction house founded in the summer of 2011 that aims to connect buyers and sellers of art through both monthly themed auctions and benefit auctions, which allow non-profits and foundations to hold events online.

Damien Hirst, the controversial, English pop artist, Alexander von Furstenberg, the son of prominent fashion designer Diane von Fürstenberg, along with members of the Mellon family were among those to contribute to the startup’s latest investment. The $6 million round follows on the heels of a $4 million Series A last year, both of which were led by Founder Collective and Mousse Partners.

Part of the interest in Paddle8 is its mission to become the online destination for beginners and wily veterans alike. It wants to walk the line between stuffy and accessible, allowing the public to access and buy legit, curated works and find insider opinions from the influential figures who participate as guest curators for its auctions.

There’s also the fact that, as Semil Shah wrote when he interviewed co-founder Aditya Julka earlier this year, it’s not easy to build a viable online marketplace in a complex and opaque industry like the one that has grown up around fine art over the decades. Artists, gallery owners and collectors are very particular about the process by which pieces of art move between each party involved in the transaction (understandably, given the amount of money that may be exchanging hands) and what kind of re-sale options are involved.

As Semil points out, a virtual auction house, if done right, can solve problems which have traditionally deterred some art holders from working with offline auction houses. For example, if an owner ends up selling art back to the gallery after buying it at an auction, they’re likely going to take a significant hit in doing so. Not to mention the fact that many auction houses (online and off) typically price out a big chunk of the market, limiting auctions to items over $100K. 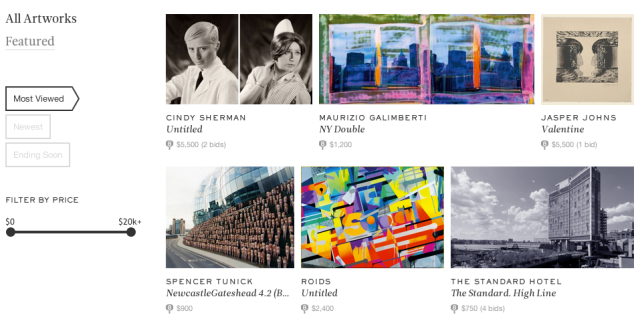 Paddle8 aims to deal with these industry-specific issues by catering to the “lower, higher end” of the market, offering auctions on items up to $100K and setting durations at a fairly lengthy two weeks. In saying “lower, higher end,” we mean that it’s not quite the affordable, accessible-to-everyone end of the market startups like Zazzle and Art.com cater to; however, it still opens it up to a larger audience than those upstream, while maintaining an air of “legitimacy” for serious buyers and sellers.

For galleries and gallery owners, the startup offers a set of services which allow them to run their back-ends via its platform, including a dashboard for inventory and transactional management and the ability to ship, install and insure artworks without placing limits on time and geography, as we wrote last year.

The key to building a successful marketplace and business in a niche industry like this (and really any other, for that matter) is that you have to know, and respect, your audience. Even if they’re a little bit eccentric — or snobby. Paddle8 also gives galleries, art fairs and museums a POS transaction platform and, going forward, it wants to offer them private, virtual rooms to display artworks to potential buyers — rather than having to attach a .JPEG to an email, which is the way things usually work — along with the ability to auction works outside of their exhibition. The company also attempts to appeal to art sellers by taking a 6 percent commission from sellers, while charging buyers 12 percent.

The startup also keeps all records and prices involved in auctions private, meaning that it doesn’t disclose details of whether or not a piece of art sold, didn’t sell, or sold for less than the asking price. For artists or owners, this can be a fairly attractive policy in an industry that’s all about your reputation and show — taking a hit or failing to sell might have insiders turning up their nose at you the next time around. 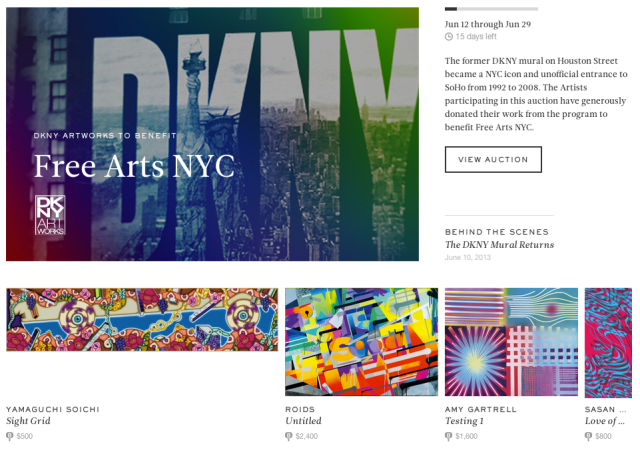 Of course, Paddle8 isn’t the only one that sees opportunity in a digital marketplace for fine art. Founded last year, Auctionata shares a somewhat similar vision in that it wants to peel back some of the frumpy layers of the art world by making the international art market more accessible to the general public. In a slightly different approach than Paddle8, however, the Berlin-based startup is going directly after the big names in the old world of auctions, like Sotheby’s and Christie’s.

It’s doing this by attempting to re-define the familiar, live format by hosting auctions every Friday from its own TV studio. Basically, it’s going for the 100-percent-online, streaming media version of Sotheby’s. Auctionata also offers evaluation, appraisal, authentication and marketing services — along with some of the logistical tools in Paddle8’s arsenal. However, unlike Paddle8, where the average artwork sells for about $10K, Auctionata is going after the high-end. In April, it auctioned off a painting that a had a starting price of $1.5 million, for example.

Having grown to 110 employees over the last 12 months and looking to expand further to go full bore after this market, Auctionata recently raised some of its own outside capital. In April, the startup landed $20 million from Earlybird Venture Capital, Bright Capital and Kite Ventures, among others, bringing its total investment to $23 million.

With its new capital, Auctionata wants to continue hiring and build a bigger, 5,000-foot studio in New York, and expects to hit $20 million in revenue this year, according to Crain’s. 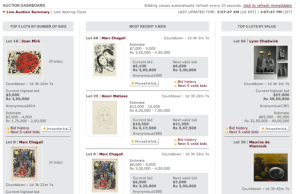 Meanwhile, with Paddle8 busy attacking the fine art market in the U.S. and Auctionata moving across Europe, a company called Saffronart has been busy applying the eBay-for-fine-art model to its home market in India. In fact, the company, which has been around in various incarnations for over a decade and has raised over $12 million from Sequoia and others, now claims to be the “largest fine-art auction house in India, online or otherwise, and one of the largest online fine art auction platforms in the world.”

For most of that time, Saffronart was almost exclusively focused on the Indian market (and Indian art) and while it’s sticking with what’s working, it, too, has been looking to expand its scope and started selling Western art for the first time last year.

Whether or not this world seems too niche to get overly excited about, these startups are finding an eager audience, especially toward the lower-end of the market. The musty air of the fine art market is in sore need of some fresh tools that can make its goods and services more accessible, and whether or not we find it all a little high-falutin’, for these three companies (among others), the approach seems to be (quietly) paying off.