Obviously MySpace has very few friends left to alienate — Tom has long since moved on — but that hasn’t stopped it annoying the hell out of its few remaining fans by forcing through an update to its shiny new music discovery platform that’s swallowed their old blog content, with no guarantee it’s ever going to be retrievable. Oh but users are being told to vote on the idea of getting their deleted stuff back. I mean WTF?

We’ve asked MySpace exactly WTF is going on and will update this post when/if they reply.

The Justin Timberlake-backed former Prom Queen of social has been dangling the ‘new MySpace‘ since last September, opening it up as a beta in January but offering a parallel sign-in option where users could still click through to ‘classic MySpace’ if they preferred. And let’s face it most of MySpace’s few remaining hangers on were very likely to have preferred the old world order, since that’s where they could peruse the personal content they had posted on the site.

Well MySpace has now shut the door on the past and accelerated ahead into its shiny — or rather space-y — social music discovery future. But in its rush to fulfil JT’s vision of tech brand rebirth it’s managed to miss the fact that all the old clutter lying around the place was the only thing giving it any character. You know, those blog entries that angsty teens wrote back in anger in 2005. Where are they now? Gone is where. Vanished. Disappeared*. Replaced by Pinterest-esque notice board spaces urging users to DISCOVER MORE and CONNECT TO MORE… (Subtext: Srsly, won’t SOMEONE please just start CLICKING. Someone? Anyone?) 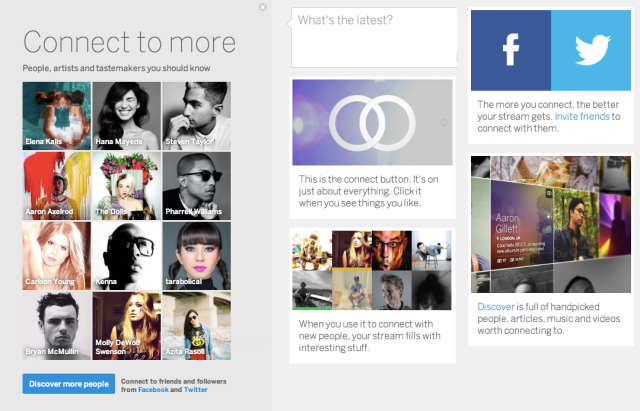 In case you’re wondering whether anyone cares that MySpace ‘classic’ has been erased from existence. Or rather whether MySpace still has any users left to notice/care about this departure, well yes actually. More because people care about their own pasts, than about a past-it social network of course. But regardless of the reason, MySpace has committed the cardinal sin of burning the folk who cared the most. Not classy, not clever. And entirely avoidable: just warn existing users about what you plan to demolish in advance, and give them the time and tools to transfer their stuff. It’s not exactly tough to get right, yet MySpace has got it wrong wrong wrong.

Instead of warning the users now crying a river over their lost blog entries of its frankly dastardly plan to despatch blogs to the social scrap heap, MySpace appears to have assumed no one would care and just steamed ahead and flicked the switch. Assuming no one gives a damn about your old services doesn’t augur well for the future of your new services. What goes around… comes around, JT.

Not giving old users a grace period to retrieve their data before it was replaced with empty spaces containing Pinterest-esque urgings to start building multimedia collections is the sort of crime I can last recall Microsoft committing way back in 2007. When it took over Hotmail and decided to delete a decade’s worth of my emails just because I hadn’t logged into the account for a few months. Not cool doesn’t even begin to describe it. As with the MySpace classic blog holocaust these type of situations are entirely avoidable. And should be avoided — if you ever want users to trust you again.

At least in MySpace’s case it sounds as if they might not have actually deleted any blog data yet but rather just cut off access to it — perhaps so they can gauge how much people care and therefore whether it’s worth their while helping them migrate their stuff. Well, JT, on PR grounds alone, it’s worth it. And if you want any new MySpace users to consider trusting any stuff to your servers in future, it’s also worth it. Assuming you think new MySpace has a future. Rather than being, y’know, dead and gone.

MySpace’s explainer about its new world order notes that old MySpace friends (now rebranded as anodyne ‘Connections’ to fit with its new sanitised style) have been transferred over to new MySpace. Users can also transfer their photos and playlists manually using an import tool. (Shucks, you’re really spoiling them there!) But the list of what’s not been transferred is far longer — and includes the most sentimental stuff. The stuff clearly jangling up JT’s vibe…

What will not be available from my old profile?

We’re focused on building the best Myspace possible. And to us, that means helping you discover connect and share with others using the best tools available. Going forward we’re concentrating on building and maintaining the features that make those experience better. That means you won’t see a few products on the new site…

It’s a sign of the social times that text-based blogs, messages, posts and comments are being carted out and dumped on the scrap heap. If it’s not shiny, visual and multimedia it’s worthless, is what new MySpace says. Thing is, that characterful textual clutter it’s so keen to paper over may be the last remaining thing of value in the place.

Add to that, this is not the only time new MySpace has been trigger happy with the delete key. Its new groove was so keen to erase the past it also erased bands’ fan bases too. So really this is a reboot of a reboot of a reboot. So, yeah. Good luck with that.

*NB: MySpace users who had a public profile may be able to recover some data from the old site via Google’s cache — searching using: site:http://www.myspace.com/username/blog