Android has convincingly overtaken Apple as the most popular OS in the smartphone industry both in terms of sales and overall penetration. But when it comes to how much wireless devices are actually used on cellular networks, those who own Apple handsets are disproportionately the biggest users of apps and the mobile web — possibly a sign of why developers continue to make iOS a major focus, but also possibly one reason why Apple is also changing in its newest version of its mobile OS, iOS7, how apps use mobile data.

According to figures out from Actix, a specialist in mobile traffic analysis, combined traffic from the iPhone 4, 4S and 5 makes up just under 54% of all 3G traffic on the networks that it monitors. If you add in traffic from iPad tablets, which came in at 6th and 7th positions, that figure goes up to almost 59%.

The company, a specialist in optimizing wireless network performance on congested routes, tells me it collected the data over the past six months from “mature” carriers that it works with (it has operations in over 100 countries) and used data from the busiest hour on the network. The data is anonymized.

Android, in contrast, has three devices in the top-10, all Galaxy S devices, but none the newest S4. Together the Galaxy S, S2 and S3 make up just under 18% of 3G data traffic. The list is rounded out with BlackBerry handsets (again, older models), which make up just over 3% of traffic. Nokia and other handset makers are not part of the equation at all.

The data stands in contrast to how devices actually around the world. Phones running Google’s OS are taking about 64% of new sales; while in countries like the U.S. they are accounting for about 53% of all existing smartphone ownership. 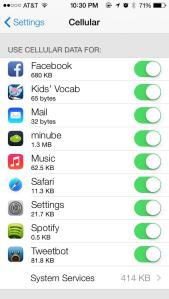 What to make of these conclusions? Actix doesn’t specify whether the high rankings of Apple devices are directly related to their users being such avid consumers of apps and mobile data, although recent evidence from companies like Flurry, which measures app usage and analytics across both platforms, seems to point to this fact.

Still, the fact remains that some of this usage might not always be welcomed by users, for example when it relates to certain apps’ automatic data polling, which can be a drain not just on your battery but also your monthly mobile data allowance.

Apple will be addressing this in one way in the latest version of iOS. Users will be able to decide how much of that activity they would like to run over non-WiFi connections, by offering an option for users to turn off cellular data not just for the whole device, but for each individual app. The feature, as you can see from this illustration, also specifies how much data each app is using up.

Tablets: Actix says that this is the first time that tablets have broken into the top-ten list of most popular devices on 3G networks that it helps manage. As they entered the top 10, the iPhone 3GS and the 9700 from BlackBerry dropped out.

Most tablets are equipped only with WiFi connectivity, and while figures from a year ago indicated that tablets were accounting for very little traffic on 3G networks, it appears that this may be changing.

Actix says that traffic from tablets, and specifically iPad devices, increased four-fold in the last six months. When compared against the longer tail of smartphone usage, these tablets typically consumed three times as much mobile data. That’s because we know that tablets, with their bigger screens, are natural places to consume data-heavy services like video on the go, so it makes sense that as more of these with 3G and 4G connectivity enter the user base, the more likely it is that they will have an impact on data networks.

“The easy availability of iPads with a mobile network contract is now impacting growth in data demand on the mobile networks as users demand a connection wherever they are and whatever the device,” said Neil Coleman, marketing director of Actix, in a statement. “This is the second phase in the mobile data revolution started by the iPhone in 2007.”

While Actix is perhaps more interested in how to tackle this problem for mobile carriers, for users this could see a bigger focus on special tariffs for tablet devices, and the rising popularity will also have a knock-on effect of more apps and other content getting created specifically for the medium, maybe even with a focus on how to do it in the most data-efficient way.

That’s because this appears to be trend that is only going to grow.

The analyst firm Canalys counts tablets as “PCs” in their calculations, and in some figures it released yesterday, the company noted  that of the 493 million PCs that will be shipped this year, 183 million of them will be tablets, with the rest split between desktop PCs (105 million) and notebooks (2015 million). By 2017, that balance will shift massively in favor of the more mobile, lighter and often less expensive tablet, with 456 million shipped compared to only 86 million desktop PCs, and 172 million notebooks. While WiFi will certainly continue to a mainstay in those devices, it’s inevitable cellular use will also ride the wave.