Malaysia is an easy place to get cheap, good, English-speaking talent, with overheads that are often far lower than in more advanced markets in Southeast Asia. But it continues to suffer the effects of brain drain. Simply put, Malaysia isn’t cool to be in for some of the nation’s brightest, and this has hurt its startup scene, according to Khailee Ng.

Ng, who is from Malaysia, was recently hired by 500 Startups as venture partner for Southeast Asia. The Silicon Valley VC also set Ng up with a shiny new $10 million microfund for the region. (The SEC-filing was called 500 Durians.)

Ng was speaking to a roomful of Malaysian startups and the 500 Startups’ Geeks On A Plane delegation that is currently traveling through Southeast Asia.

When I spoke to him on the sidelines of the conference, he said Malaysia has all the makings of a ripe scene to be picked, but he has been watching in dismay as startups flocked to larger, far less Internet-penetrated countries such as Indonesia and the Philippines. And Malaysia often gets outshone by its smaller neighbor to the South, Singapore, where plenty of large corporations have set up shop, and seed funding is readily available, backed by government funding.

Malaysia’s situation is the result of an under-marketed set of funding from the government, plus a syndrome where none of its successful entrepreneurs are keen to let others know about them, said Ng. Some government funds that have been around for a decade already. “Nobody knows they exist, or there are misconceptions that it’s hard to get, or there are bureaucratic hoops to jump through,” he said.

For example, the Cradle fund offers up to $160,000 (RM500,000) in seed funding to projects that are younger than three-years-old. Other non-government-linked funds that have just been set up within this year include $10 million from 1337 Accelerator, $150 million from Catcha Group, and $5 million from the Asia Venture Group. 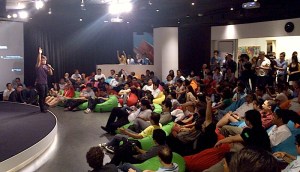 Ng also said that people are often surprised to find that some of the largest tech companies to IPO in the region are from Malaysia. According to a ranking of publicly-listed companies taken about a year ago, Jobstreet had a market cap of $268.2 million, iProperty Group had $178.2, My EG Services had $151.7 and iCar Asia had $56 million. The fifth in the list was the only one not from Malaysia, and was Singapore-based Asiatravel.com, at $40.4 million, he said.

He said the local scene also needs more experienced professionals coming in. “There’s nothing wrong with fresh grads, but sometimes you get one or two guys who have either had a failed startup, or one of those McKinsey, Accenture guys, and you can really feel things getting serious (in the startup),” he said.

Copycats are also the reason why startups in the region need to think outside their home bases from day one, said Ng. While many often think they should conquer one market and slowly expand outwards, it’s often too late by the time the expansion happens. “Be in as many markets as you can afford to be from the beginning,” he said.

The reason why many copycat models fail is not because transplanting models doesn’t work, but because execution is the main difference, he added. Operational excellence and being “super tight” can make or break a startup. “That’s why you get group-buying being crazy profitable in some markets, but bleeding in just the next country. Same model, right? It’s operational issues,” he said.

Check out Ng’s slide presentation on being a startup in Malaysia.