Payments company Adyen has published the first of a new quarterly index intended to track the evolving landscape of mobile commerce. One notable increase flagged up by the data is the increasing popularity of tablets as a commerce device. The inaugural Adyen Global Mobile Payments Index is based on 10 months of transactions conducted on its platform. To give a sense for the size of the index, last year the company processed more than $10 billion globally in online, mobile, and point-of-sale payments transactions.

The Index shows that tablet devices (both iPad and Android) saw a combined 5% increase in mobile transactions over the past 10 months, rising from 48% to 53% over the period. This is just the latest data-point to illuminate the distinct role being played by tablets vs. smartphones when it comes to mobile commerce.

Other studies have suggested tablets are carving a strong niche as a device for casual browsing — which in turn positions them to support casual and impulse shopping, something that’s more difficult to achieve on smartphones with their limited real estate (although a highly curated experience may be one way to push impulse transactions through the mobile pipe, as YPlan is doing). Tablets’ larger screen size simply offers more scope for browsing, in the shopping discovery sense of the world. Combined with touch interfaces and the easy/speed of lightweight tablet platforms there’s scope to be far more playful than ecommerce websites typical are. (See, for example, Vitacost’s tablet website.)

Although tablets — and specifically the iPad — dominate Adyen’s mobile payments Index, it does also show smartphones playing a strong role — especially in North America where the majority (58%) of mobile transactions are carried out using a smartphone. However the iPad is the dominant force in every other region globally. Notably, though, the iPhone comes out as a stronger transaction platform than Android tablets — likely owing to the sheer number of iPhone owners vs. Android tablet owners: 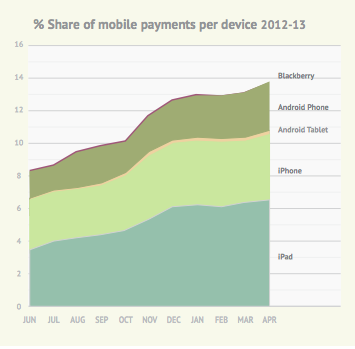 Overall, worldwide mobile payments transactions on Adyen’s platform have increased by 75% over the measured period, with the total percentage of mobile transactions increasing from 8.2% in June 2012 to more than 13.8% in April 2013. The Index also found that Europe leads the world with 15.3% of all transactions made using a mobile device, followed by Asia (12.4%) and North America (11.2%).

When it comes to mobile commerce’s ingress into different sectors traditionally dominated by PC transactions, travel comes out on top, with 20% mobile penetration, followed by retail, ticketing services and digital goods (with 15% penetration apiece). Gaming lags considerably, with mobile gaming accounting for only 9% of transactions — likely down to the richer gaming experience afforded by desktop PCs, says Adyen.

In retail, tablets are edging out smartphones with 10% and 5% of the mobile transactions respectively — retail being another area where discovery-based shopping is important. By contrast, ticketing services are almost entirely mobile, according to Adyen’s data, with smartphones accounting for 9% of the overall 15% mobile pie.