Housebites, the London, UK-based startup that enables independent chefs to sell home-cooked meals as an alternative to a take-out, has shuttered in its current form as it gears up to pivot — once again.

Its website has been replaced by a holding page that apologises for the withdrawal of the service and thanks “loyal and valued” customers for their support, while also promising a new website and food offering in a couple of weeks. “We had a great product for a while and couldn’t have done it without you”, notes the statement.

In an email to TechCrunch, Housebites CEO and co-founder Simon Prockter confirmed that its take-out business is indeed no more: “Is Housebites dead-pooled? Yes,” he says. “Is Housebites gone? No. We just closed the takeaway part. Admittedly the larger part of our business and the product that we were best known for.”

Instead the company plans to focus on a new product, internally known as Project Fresh, although specifically what that new offering is, Prockter isn’t saying. “Housebites is not going anywhere and we’ll be back soon doing something that keeps us more of an Internet rather than restaurant business,” he says. 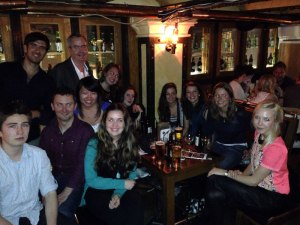 We’ve also heard from sources that the startup has made a number of redundancies as it looks to restructure its business, which Prockter partially confirms. “Rumours of people being laid off are going around that are a little exaggerated so let’s put that straight,” he says. “We laid-off three people and we postponed hiring in place of a further three that had recently left of their own accord. Of the three laid-off one has already been offered an alternative position in the company. There are still seven remaining people working here now. I spent last night with all thirteen”.

Housebites, whose backers include EC1 Capital, Michael Birch (founder of Bebo), and Steve Pankhurst (founder of FriendsReunited), started life in 2010 as a “peer-to-peer dining platform”, before pivoting to become an “Airbnb for takeout“, letting people order food prepared and cooked by vetted home chefs as a better alternative to traditional takeout services. The service appeared to prove popular amongst users and the chefs that powered the platform, though we were always a little skeptical about its ability to scale, even as the collaborative consumption hype fuelled by the likes of Airbnb began to take hold. The cost of vetting chefs and dealing with the customer service side of something like Housebites presumably doesn’t come cheap.

And indeed Prockter seems to confirm that scale was an issue. Or at least the length of runway needed to reach scale. In addition, as disruptive as Housebites was setting out to be, VCs didn’t view the startup as technology-based enough, making raising the required funds difficult. “Our version of takeaway was always a difficult model and we know many outsiders were always curious how it could scale,” says Prockter. “A fact that not too many people realised is that Housebites was a franchise not a marketplace. This meant that each chef was a mini restaurant and our goal was to make each a £100k business. We have no doubt that over time we could have got there”.

Prockter says that chef income rose from £35 a day on average on month 1 to “almost £200 a day last month”, which he claims is higher than they’d earn working in a restaurant. In addition, the franchise model avoided the legal, conveyancing and kitting out costs that most takeaways incur. “On paper it always stacked,” he says.

“Unfortunately we had a long slog ahead. A few more years to breakeven at a cost of a couple of million. We’d become more of a restaurant rather than tech business so venture capital was not an option for us. We weren’t viable for private equity and we’d over-valued ourselves for most Angels.”

To that end, in July 2012, Housebites soft launched a parallel offering called Housebites Fresh. The recipe kit service, which is similar to HelloFresh, saw subscribers sent a box of freshly chopped ingredients accompanied by a recipe card so that they can prepare a freshly cooked meal at home, inspired by the professional chef-standard take-outs already delivered as part of the main Housebites service. TechCrunch understands that it’s this model, in some form or another, that points to the future of the business, which would tally with the “Project Fresh” name. Its launch is pegged for July this year.

Meanwhile, the deadpooling of Housebites in its current form hasn’t gone entirely unnoticed by users, not least the chefs who powered and made a living off its platform. A Twitter/Facebook group — HungryChefsClub — has sprung up to help find a new home for the orphaned cooks.

Full statement from Housebites’ website, which is accepting pre-registrations for whatever is next, follows below:

From 28th May 2013 we will no longer be offering our standard takeaway service.

We are currently building a brand new website that, we think, will offer even better customer value.

We know we have a lot of loyal and valued customers and we want to apologise sincerely for withdrawing this service. We also want to thank you for your support. We had a great product for a while and couldn’t have done it without you.

The new food offering will be ready in a couple of weeks. If you’d like more details then please leave your email address on the form below and we’ll notify you as it’s ready.

Thanks to everyone for helping us make takeaway better.