Threadflip, the online and mobile marketplace that helps users clean out their closets, or buy from those who are doing just that, is today introducing a completely revamped mobile experience for its iOS application following a surge of growth from its mobile user base. It’s a welcome change, and one that should help the company better compete with similar services from Poshmark or thredUP, for example.

The update comes at a time when everyone is shifting their shopping behavior to mobile, forcing companies to quickly ramp up their mobile experiences to meet that demand. For example, Fab reported last month that a third of its sales were placed via mobile, ModCloth says a quarter of its traffic came from mobile devices (even before it had released its iPhone app!), and JackThreads just a couple of weeks ago said that nearly half its orders were coming in through mobile.

The numbers Threadflip is seeing fit right in with this trend. 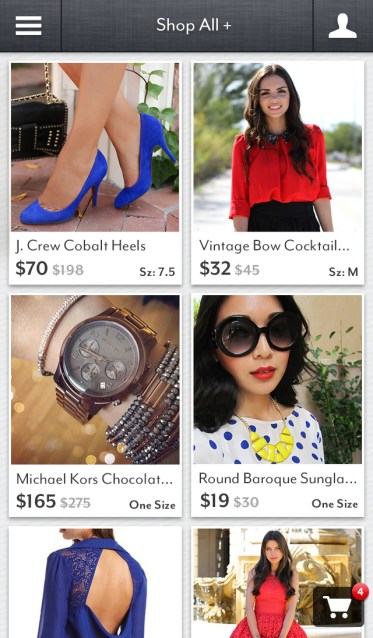 “We’re noticing a pretty big paradigm shift towards the mobile companion use cases both on the buyer’s side, as well as the seller’s side,” Threadflip CEO and founder Manik Singh tells us. “Forty percent of our daily uploads (people selling items) are coming from mobile. Twenty percent of our daily transactions are coming from mobile. We’re seeing 70 percent of the emails we send to our consumers – both marketing and transactional – opened on mobile devices,” he says.

Threadflip’s iOS application was released around a year ago, but it’s only been over the past three to four months that mobile began to take off in a huge way. Singh attributes this shift both to Threadflip’s growing traction as a brand, as well as the fact that, as its users shift from being buyers to sellers, it’s easier to snap photos of their fashion items using their phone’s camera, which then leads them to download the mobile app.

Because of this growing mobile audience, Threadflip wanted to revamp the app to better serve its users’ needs and address their feedback. Most noticeably, the overall appearance has been redesigned. Now, instead of dropping users directly into the shopping experience, the app starts you off on a new homepage where you can choose a category (e.g. clothing, shoes, accessories, all or “Editor’s Picks” for a best-of-the-best view). 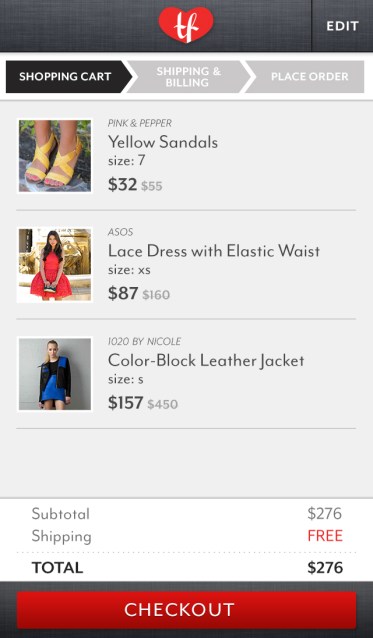 There’s also a better filtering menu which lets you find items by size, price, category (dresses, jeans, etc.) and designer. And there are a number of little touches, such as the ability to swipe between photos, change view options, share items to other social networks with a tap, and more.

“We’ve started to build heavily for the sell use case,” says Threadflip product head Anand Iyer. Sellers can snap and upload photos from the right-side menu, then stay on top of buyer activity using newly added support for push notifications. “Now with the new app, you can swipe through and say, ‘I’m accepting your request to buy my item,’ then generate a shipping label on the fly, and even print the label from the phone,” he explains.

Both buyers and sellers will receive shipment notifications, too (via USPS), and sellers are alerted when their account is credited.

However, one of the standout features is highly uncommon for e-commerce marketplaces: a universal shopping cart. “That’s kind of a novel and different experience for a marketplace,” Iyer notes. Typically, marketplace sites require that buyers transact with individual sellers one-by-one, but Threadflip’s revamp makes buying secondhand feel more like shopping at a “real” e-commerce site with this addition.

The company isn’t disclosing its user or transaction numbers right now, but reports double-digit month-over-month growth since launch, and a bigger jump over the past three months as mobile has picked up. Threadflip has also been growing its team, too, following its $6.5 million Series A from  Shasta Ventures, Lowercase Capital, First Round Capital, Forerunner, Baseline, and others. Now with $8.1 million in total outside funding, Threadflip has gone from five people to a staff of 20.

And yes, some of them are working on the native iPad app and an Android version, as well as some new features (tease, tease) for web and mobile due out in about a month.