After closing a $4 million round in March, led by Battery Ventures and Hasso Plattner Ventures, Berlin-based multi-mode travel search platform GoEuro has now launched its website in open beta in the U.K. and Germany, as the first stage of its European rollout.

The startup is aiming to simplify the problem of figuring out the best mode of transport to get from A to B — whether that’s coach, train or plane. Basically the platform is designed to cut out the legwork of Googling things yourself, by suggesting nearby airports and train routes to connect up where you’d like to go — and also estimating the entire length of travel time. So, for example, not just the flight time but also the waiting time at the airport.

After pulling in diverse data sources to offer various route options, it also makes it easier to visualise which routes are best and compare the cost of different travel options — displaying a comparative chart based on what’s cheapest or fastest. “What we’re trying to do at GoEuro is we’re trying to bring all modes of travel across Europe on the same platform — that’s air, rail bus and cars,” says CEO Naren Shaam. “We show everything in terms of total travel time, and total price. So I can have a true comparison of what’s the cost.”

Users enter their start point and destination and GoEuro calculates suggested routes and prices. In the U.K. GoEuro says it’s still working on integrating coach companies so there’s not currently any bus data. The platform will also not include urban public transport options in any markets — such as London buses — but rather is designed for helping travellers make longer distance travel plans. 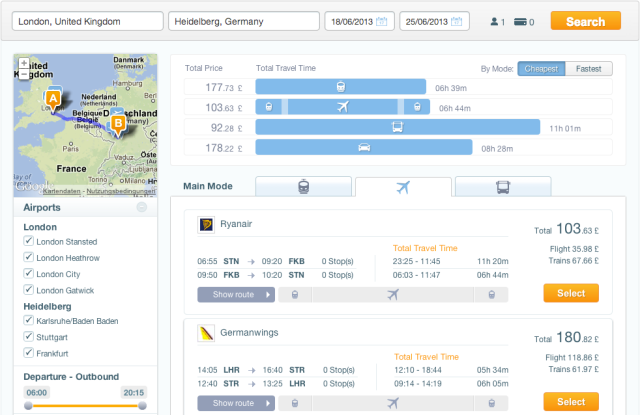 GoEuro is partnering with travel companies in its chosen markets to get access to real-time timetable data, so there’s no screen-scraping going on. “All our data is real-time data. So we partner, for example in Germany we used Deutsche Bahn, in the U.K. we use Rail Easy to get real-time schedules, real-time prices and seat availabilities,” Shaam explains. “Our technology allows you to bring all the different sources of data on the same platform. For a user I can now compare the two as if it’s the same, and I can combine them. So I can put a train leg next to air.”

Currently it doesn’t support booking within the platform — instead linking out to the external travel suppliers’ websites to purchase tickets — but that’s something GoEuro plans to integrate into its platform in future, says Shaam.

He also says the plan is to ramp up the number of markets it covers in Europe, but it’s not currently disclosing which markets it plans to tap next. Asked whether GoEuro might look to launch a service outside Europe Shaam said it’s not currently planning anything, noting that the U.S. is not so well suited for this type of travel logistics engine, being so much more focused on air travel. He added that it may work well in other markets such as India, China and South America so GoEuro plans to license its underlying technology. 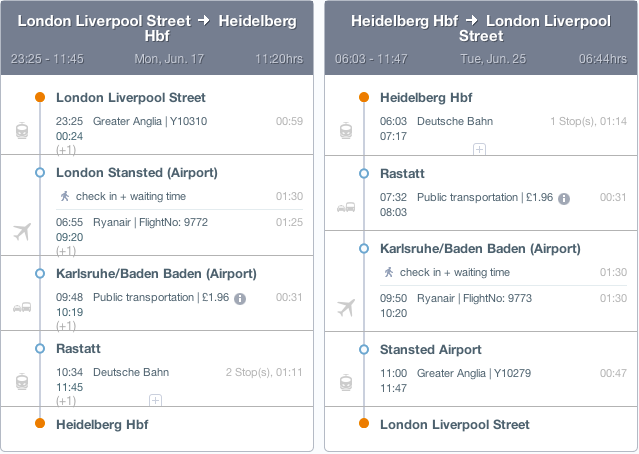 Asked how it can succeed in an ambitious travel aggregation space that others have tried and failed to keep on trucking in before — thinking of the likes of Zoombu which took the ‘acquihire’ route out — Shaam says: “The difference between us and some of the others who have tried is we take a very good balance of technology to commercial. So we actually go out, actively pursue contracts that are difficult to get… and we bring technology. And both of these combine with the final, I would say, most important thing is a very simple user experience.”

Its business model is based on taking a cut of booked travel. Shaam says the startup is already making revenue. GoEuro has a growing team, now 14-strong — up from 10 in March. As it scales up to new European markets it will be looking to grow that significantly, he adds.