The world of payments is being turned over by the likes of Square, PayPal, Stripe and others, which are tackling the idea of payments based on hardware terminals, and new services that focus on innovations in smartphones and tablets with functionality coming by way of software iterations. Not to be outdone, incumbents like point-of-sale device maker VeriFone are also cutting their own deals to keep up in the game. The latest is a deal with CardSpring, a payments startup founded by former Netscape engineers, which will allow thousands of merchants to enable loyalty programs, point-of-sale discounts, and more using customers’ existing debit and credit cards.

Unlike card-linked competitors edo and Cartera, CardSpring is not a merchant-facing platform itself. It’s infrastructure – like what Twilio is to voice, or Stripe is to e-commerce, for example.

And now, with the new VeriFone partnership, retailers and other third-party developers, like Foursquare, will be able to build card-linked services for point-of-sale systems and VeriFone devices, without requiring any change to shoppers’ current purchase experience or a store’s existing hardware setup.

These card-linked applications can include things like loyalty programs, discounts, gift cards, coupons, and more, and are triggered by the payment event itself. On this front, CardSpring is agnostic – payments can be traditional card swipes, NFC-based “taps,” or even Square’s “say your name at checkout” feature, for example. 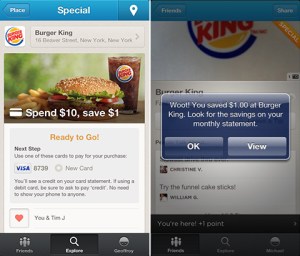 Foursquare had previously partnered with CardSpring and First Data on its service launched earlier this year, which offers Visa and MasterCard cardholders discounts and other deals when they use Foursquare to check in at particular venues, after first adding their card to the Foursquare app. That move was made possible by CardSpring’s First Data partnership, which debuted last summer alongside a round of strategic investment from a number of high-profile individuals like Cloudera Chief Scientist Jeff Hammerbacher, LinkedIn CEO Jeff Weiner, Ignition Partners’ Brad Silverberg, and former Intuit CEO Bill Campbell.

Going forward, Foursquare, and as well as other publishers and retailers, can connect their online promotions to transactions at point-of-sale which are registered with VeriFone’s PAYware Connect (PWC) gateway.

“VeriFone wants to enhance the consumer experience at the point-of-sale and add value for merchants by delivering solutions that support in-demand features such as loyalty, rewards, offers, and coupons,” says Harry Hargens, Director of PAYware Business Development, about why his company is now working with CardSpring. “Also, we want to make it easier for merchants to implement these services, and relieve them of dealing with the technical complexity.”

It goes without saying that the addition will also help VeriFone better compete with newcomers like Square, by offering merchants loyalty and marketing services to those who continue to use its products.

Eckart, like co-founder Jeff Winner, was an early employee at Netscape. “We come from a world with open standards, so when we started working in the payment industry, as developers we wanted to provide standard APIs to get access to payment systems,” he says.

“We do believe that you’ll get more value by creating APIs just like Stripe and Braintree have done, making it easy to accept payments online. We’d like to come in and make it simple to add functionality to payments at POS. That’s what this company was founded on.”

Today, CardSpring has around 400 developers using its APIs, and takes an undisclosed cut on each transaction, the terms varying depending on the size of the partner. “We are similar to how other transactions are priced on the internet,” Eckart tells us. “Some are flat and some are per transaction. There might even be a free version at some point in time.”

Though the VeriFone deal is a big one – it powers about half the retailers in the U.S. – Eckart says that another deal with a payments company will be announced soon.