Twitter today made the latest push in its bid to cozy up to Madison Avenue and the world of big-budget advertising, by tapping more into the kind of mainstream mediums where advertisers like to spend their money. Today the big focus is TV and your living room. In New York, the company announced Twitter Amplify, a way of bringing real-time video into the site, with initial partners including the broadcasters BBC America, FOX, Fuse and The Weather Channel. And it also announced TV ad targeting, one of the first fruits of the company’s acquisition of BlueFin Labs.

Twitter ad targeting works like this: an advertiser or media buyer uses a special dashboard that Twitter has created for the service, which lets a brand monitor when an ad has aired on TV. Through this, the campaign manager can then send out Promoted Tweets that coordinate with them. They synchronise, Twitter says, using “video fingerprinting technology to automatically detect when and where a brand’s commercials are running on TV, without requiring that advertiser to do any manual tracking or upload media plan details,” Michael Fleischman, one of the co-founders of BlueFin Labs, and now a product manager for Twitter, notes in a blog post.

Through this, the advertiser is able to measure how socially responsive people are to the TV campaigns and vice versa. Using Twitter handles and hashtags on the TV ads will be how those advertisers shuttle people to the social network.

Twitter says it will be able to determine where and when an ad ran on TV, as well as track those who have subsequently tweeted about the ad and the TV program that it ran against. “We believe a user engaged enough with a TV show to tweet about it very likely saw the commercials as well,” the company notes on its blog.

The company is banking on a crucial stat as the leap of faith that this will all work: it says 64 percent of mobile-centric users on Twitter use it in front of the TV at home.

For now Twitter’s targeting service will be available only in the U.S.

Meanwhile, the instream broadcasting clips that are part of Twitter Amplify, starting with BBC America, FOX, Fuse and The Weather Channel, will be very closely tied to ads and video directly on the platform. This is something that Twitter has already been doing with partnerships with, for example, the NBA, where a video also features a link to an ad: 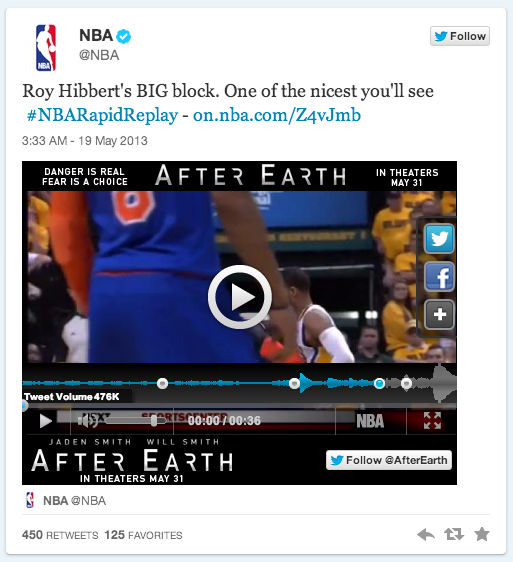 What’s interesting is that it looks like Twitter will be limiting use of this new kind of Twitter card to paying users, with Glenn Brown, director of promoted content and sponsorships, noting that they will be “powered by Promoted Tweets.” The idea appears to be that rather than replacing the TV experience (not yet at least!) these in-stream videos will be used as “spectacular, timely content that rounds out their TV experience or reminds them to tune in.” In other words, ways of getting people to the TV with teaser clips rather than simply offering them a way of seeing what they want on Twitter and cutting out the tube altogether.

Speaking at the New York event, CEO Dick Costolo talked about how the company has made advertising a more “frictionless” experience because of its emphasis of real-time updates. It’s clear that adding more broadcasting-like experiences into Twitter will further that concept.

The company during its event also threw in some fun ad-land perks: a Q&A session with Glee actress Jane Lynch and a Tweeting vending machine churning out swag.

Twitter has been making increasingly strong moves this year to get its platform to be more ad-friendly (and revenue-friendly). That kicked off in February with the launch of an advertising API so that larger advertisers can better manage their campaigns on Twitter; an improved advertising analytics dashboard; and Google AdWords-style keyword targeting (TC coverage here, here and here). Just earlier this week the company also unveiled the official launch of Lead Generation Cards, something Twitter had been testing for a while already, which lets advertisers include actions like requests for more information that users can get automatically by clicking a button in an advertising tweet. (You can see how this last one also sets the stage for Twitter making the leap into commerce, with one-click purchasing.)

While Twitter has not provided any official public guidance on how much it expects to make in advertising this year or in the future, there has been a lot of speculation about the number because many expect Twitter to go public, with a likely date in late 2013 or 2014, according to observers. A report from eMarketer in March noted that it was raising forecasts for the company to $583 million in 2013 and $950 million in ad sales in 2014, 60% coming from mobile.

The stats that Twitter’s president of global revenue, Adam Bain, provided last year shows just how much the company has grown over the last year. Bain noted at the time that Twitter had 140M+ active users; now that figure is estimated to be closer to 300 million.

Bain also had noted that 55% of users access Twitter on mobile, with 40% growth quarter over quarter, and that among Twitter’s active users, only some 60% actually tweet, but all of them “listen.” And in a sign that Twitter was always going to figure out a better way of leveraging ads on the platform, even a year ago, some 79% of people on the site were already following brands.